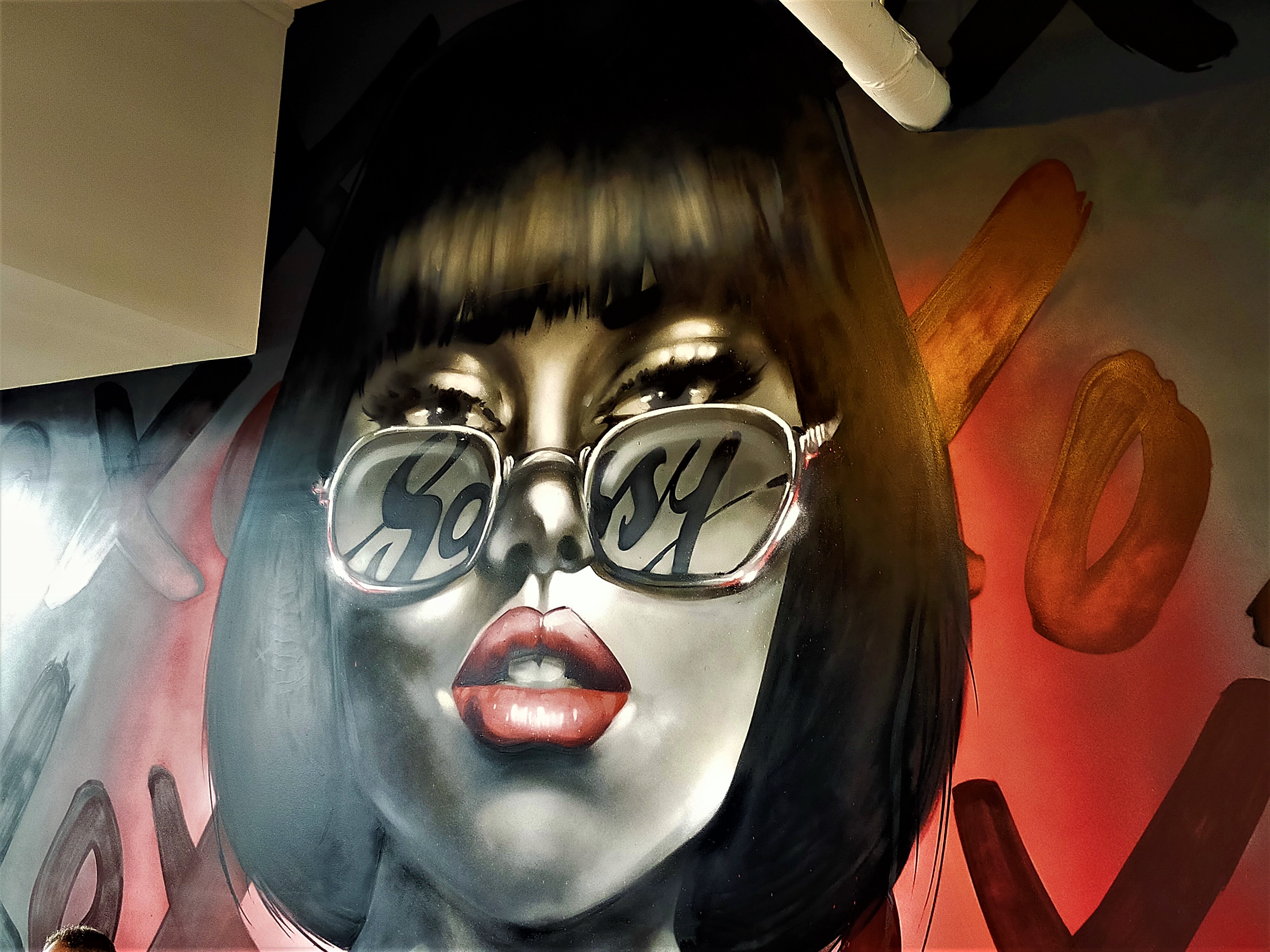 ‘Sassy’ can mean anything and that’s what we’re about; with our food and the type of people we are. Sassy can mean love, something inspiring, sassy can be passion, flavours can be anything so that’s what it’s about: enjoying, being happy. That’s being sassy!

Did you know when you set out that these would be such successful eateries and what is your recipe for success?

I don’t believe there’s a recipe for success per se. I believe it’s within you. If you have the passion inside and you do things with passion and love and you’re positive and you know that things are going to work within that positive energy and that love, that’s all you should worry about. Before anything else, what you need to worry about is making sure that the team you pick are the same as what you are; they are positive, energetic, healthy and want to produce really good things and they work with love and passion, that’s it. Love and passion is everything; if you can put that into whatever you do ̶ whether its cooking, pastries, making wine or gardening, you’ll have a beautiful outcome.

Melbourne has a heavy presence of Italian restaurants. How do you compete with the rest?

My philosophy here was that I wanted to do something that was just a little bit different and open up an Italian-theme restaurant but create something different, inspired by my experience in South America and Asia. My business partner is influenced by Asian cooking so my thought was that we could do Italian-style cooking with a modern touch but with old traditional recipes that I would never give up. My grandfather was a chef so for me to still do pasta and sauce and cooking lamb and fish the way he taught me, the old-style way, is bringing that into the 21st century but also adding a little bit of Asian influence that creates a bit of a difference. [This approach] has inspired people and given us a good rating and people have really embrace it.

Ele reminds us not to forget “without being too biased, that Italians have done beautiful dishes for such a long time and the Asians have learnt a lot from the Italians and created their own style of cooking as well. It is now our time to learn from the Asians; creating a sense of Ying and Yang”.

Why did you shift from the CBD to setting up business in West Melbourne?

I had a loyal following in the CBD where I was for some 25 years. I thought it was time to move and take it to the next level. West Melbourne is very close to the CBD. It is a good spot to create something to the next level, it has a good skyline and attracts a range of customers.

What is the correct definition or right way to refer to your restaurant? How would you classify it?

“To keep it simple it is Italian with Asian influences; infused with Asian spices and, obviously, it is a bit influenced also by South America” (and he specifically mentions the paella and the choripán also on offer on his diverse menu).

He adds: “I like to bring to people where I’ve been and travelled and things I’ve tasted, bring it back and create my own style but still remain faithful to what my grandfather taught me”.

We mention the ‘Slow Food movement’ initially introduced by Italian Carlo Petrini in 1986 and with ‘Good, clean and fair’ as its motto, and Ele says: “I find Europe and South America very similar in the families and their cooking; you can see the passion and love when they eat. When the food is on the table everyone respects it and they eat with passion. They can feel the flavours ̶ and you can find the same slow cooking and enjoyment of food also in rural Asia”.

You have a rich and far-reaching career with a background as a pastry chef and have worked also in Latin America, South East Asia, and Europe. Do you adapt your menu to each market you operate in?

Yes, but once again because I’m a person who likes to be a bit different; I would still like to include little bits of other countries with dishes with different infusions, also for these markets to feel inspired.

Your diverse experience and expertise have provided you with many insights into the restaurant business and attracted a very multicultural clientele. How has your blend of Italian and foreign dishes been received by your Italo-Australian customers?

“I’ve had extremely good feedback from the older Italians who have been here and have tried my dishes. When they first look at the menu they look a bit puzzled but have then tried different plates and been blown away”. And he specifically mentions one food critic’s high rating of his paella and says that he has refined his paella-making techniques by visiting Pamplona and learning from the masters making paella in massive pans.

Ele again stresses how important it is to travel and be openminded and to network with many “beautiful people”: “You never ever forget” these beautiful times where you meet people worldwide who inspire you. “Coffee and cooking; this is all part of one”. As an example he explains that you can include coffee in deserts and cooking as well, etc.

You are of Calabrian background. Are there any dishes on the menu that specifically honour that part of Italy?

“Yes, very close to my heart is the lasagne, and my gnocchi is the way I was taught by my grandfather”. And he also mentions the Napoli and the ragù sauce: “This is a very slow method of cooking but with fresh spices to enhance the flavour. I don’t put any sugar or any salts: I get the sugar and salt from the herbs and spices I put in. It is very organic.

What skills as a pastry chef do you draw from in your work running Sassy.x?

I think being a pastry chef is closer to my heart than cheffing because I am such a perfectionist. I bring the perfection required for making a cake into the cooking. When I cook, I make it 100% correct”.

If you could choose four plates from your eclectic menu, which would they be and why? I.e. from antipasti, primi piatti, secondi and dolci?

From first plates I would say the way we do the kingfish; infused and curated by ourselves. The second plate would be my lasagne. The way we do the paella is amazing and customers say our steaks match the cuts they’ve had anywhere around the world. From sweets; well I am very simple so something like the tiramisu or the panna cotta; very simple and classical. I’ve always taught people that the things you think are the easiest to make are actually the hardest. It’s the flavours and the creaminess, whatever you get on the palate. The simplest things are the hardest.

… And let’s not forget my homemade salamis

Yes, I was going to get to that. How did you manage to win that salami competition in Melbourne some years ago? Tell us more.

That was just luck. We’ve been doing it since I was around 8 years old so over the time making the red pepper sauce that goes into the salami and perfecting it over time I think was a good mix but, also, when you get your meat and cut it all up, you have to blend it correctly over days and mix it so that the flavours go through the meat ̶ that really enhances the flavours.

You have received positive acclaim from customers and food critics and have been interviewed by local Melbourne newspapers like North and West Melbourne News. In their summer 2019 edition you say you have one condition: “If you're eating in my restaurant, you must say hello, shake my hand, hug me". You also advise against the use of mobile phones in your restaurant. All very healthy requests, as I see it.

It seems you are advocating a return to basics and a more natural connection between people over food. Why is it so important to stress food and restaurant etiquette in western society today? Have we lost our ability to connect?

I believe that the younger generation coming through have lost their touch with talking, communicating and showing care and affection not just to each other but what is actually on the table. It’s great that you see today people taking photos of their food, but do they really understand it and the flavours that you are putting on that plate? If you are sitting on a table I was always taught that you should communicate with who you are with, look at them and don’t have one eye on your phone because then you are not really paying attention. If, on the contrary, you’re looking at that person you feel a connection and have a wonderful night and connection with the food ̶ and that becomes a memory. A memory should not be a photo, a memory should be in you and what you talk about afterwards”.

And he mentions a young couple in his restaurant on a date who were communicating very little and were each on their phone and how he admonished them, urging them to communicate face to face and engage in actual conversation with each other. They put their phones down and later thanked him for taking initiative. And “that’s the memory right there! All other customers heard it and they came up to me after and said they had read about me: ‘We didn’t believe you did it and now we believe that you do it!’” Ele calls it “European love”.

What does food mean to you?

Enjoyment and laughter. Having a good time around food is what sitting around a table is all about: it’s as simple as a simple pasta.

What are some of your most elaborate dishes and how do you keep reinventing yourself in your business while competing with others in the same trade?

First of all I don’t compete; it’s about working together. We all should work together; it doesn’t matter what job you do, you need to inspire yourself to take it to the next level and find new things you can work with. Networking is of the essence.

Any famous last words for our Segmento readers?

“Enjoy life, be happy, help people and talk to people to help yourself grow. Enjoy life: it’s too short. It doesn’t matter what you’ve got or not. Just enjoy it, you can’t take it with you so enjoy it”.

Our conversation ends with Ele ̶ this chef with an innovative touch ̶ inviting me on the exquisite aforementioned kingfish dish from the dinner menu; made with finger lime, wasabi cream, tobiko, and baby herbs. I am in heaven!