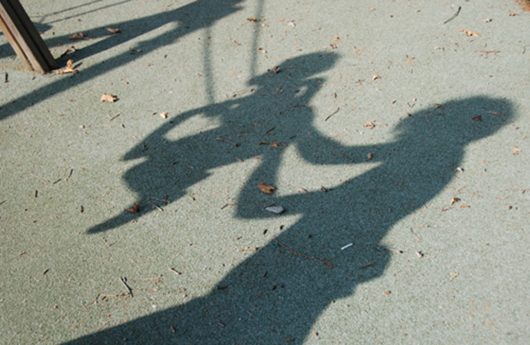 It must be so weird for them to be dragged around all the time.That was what I was thinking, as jetlagged and weary, we walked down to Ostuni’s Villa Comunale, the city’s green space, housing the only play equipment within a 20 km radius.

My partner was pushing the rickety stroller we’d bought as a spare 4 years ago. It lives in my mother-in-law’s garage, and today it was filled with a tired child, too big for a stroller, but enjoying the luxury of having parents who were too exausted to argue. I can’t imagine it’s a comfortable ride, being pushed around Ostuni’s streets in that old buggy. The suspension has never been great, but the potholes in the footpath are so deep that occasionally a front wheel falls into one, bringing the stroller to a violent stop like an un-cooperative pony, and throwing my daughter out onto the pavement. The elderly shoot us disaproving glances when this happens and I try to explain that she’s too big to be strapped in. Raised eyebrows.

There was another one on my back in a carrier. He is at the age where he points out everything he sees, practising his elastic vocabulary. My daughter does this too, but in a different way. She turns her observations into questions. She is four, the age of the notorious perchè. Why are we in Italy? Why do I have to sit in my car seat? Why is that man so fat? It’s the interrogative pronoun that is enough to drive the most patient parent to distracton.

“Mamma, perchè andiamo al parco se è notte?”“Because we are in Italy now, and it’s summer. There are lights at the park here, and lots of other kids.”“Why are there lots of other kids?” “Because they’re having a play after dinner.” “Why?”“…Let’s see who can be quiet the longest.”

When we got there we parked the stroller under an ancient tree with exposed roots so big that kids can climb halfway up the trunk. We vowed to get a photo of our children under the tree their father had known since he was their age. It’s a special presence in a place not celebrated for its flora. I released the wiggling boy from his backpack prison and set him down on his own tiny, strong legs. After all his protests for freedom he stood motionless next to his sister, looking around at the play equipment, covered in swarms of children. I watched them both as they seemed to be trying to locate some kind of space for themselves, some piece of equipment with no child already on it. They stood still, and just kept searching, eyes wide.

The first thing that hits you when you land in Italy is the crowds.The massive population in such a tiny peninsular, plus the endless visitors, all just trying to have some experience, whether it be a table at a restaurant, a photograph in front of a monument, a space for a towel on the beach. Life is a rush from one activity to the next, which is why in Italy, one cuts in line at the supermarket, weaves triumphantly to the front of the traffic on a scooter while the cars are blocked at a red light, and takes their coffee standing up.

I turned to my partner and made a joke about the playground being a good inititation into the real Italian life: “Where do we get our numerino? Our number marking our place in line for the swing?” The laughter I was expecting never came though, because the only adult member of my audience had to lunge forward to scoop up our son, who’d been knocked over by a pair of bronzed and bespectacled six-year olds.

It was fitting, this beginning to our stay in Italy, or to what I have come to call ‘our other life’. We’ve never lived here as a family, and yet, it is a place we arrive every year, settle in, and call home for a few months. Even my partner, who grew up here, is not immune to culture shock. The constant crowds, the constant activity. If you stand still too long in Italy, someone will run into you, so you’d better wake up. There are places for being idle too, of course, like the beach. But you’d better get there early if you want to find a spot. It’s a huge contrast to the walks through the bush to find a playground completely empty, or our picnics on windy beaches with no-one else around.

It didn’t take long, though. It never does.These kids, perhaps because they have been dragged around so, are adaptable.They soon realised that the trick to survival is to just keep moving. By our third visit to the Villa Comunale there was no hesitation at all. They ran over to join the herds of children, and we hovered around nearby like the other parents. No leaning back on the park benches for us. They were all taken.

After a summer filled with nights like these, we got used to watching our little girl walk around chatting animatedly with a group of new friends, or rescuing our blonde toddler from the clutches of some enamoured nine-year-old.

We’ve been away for ten weeks now, and the Italian school term has recommenced. We are travelling around the country collecting material for a music documentary my partner is working on, and though the streets are still full, there is a business-as-usual feel, and our little ones are the only children around during the day. To keep them busy while their father conducted an interview, we walked through the crisp morning to a park at the edge of town in San Giovanni Rotondo, North Puglia, (as it happens, a stone’s throw from San Marco in Lamis, where most of Melbourne’s Pugliese community hail from). The park had a view of the surrounding mountains. The grass was mown and the equipment was new and shiny, surrounded by empty benches providing a perfect view of the entire playground. A fence stood between the play area and the surround- ing roads. Aside from a man in a tracksuit circling

us on a jogging path, and a grey-haired woman pushing a baby on a swing, it was just us. It was strange, standing in that nearly empty park. It felt safe, but sterile. Relaxing, but lonely. I was exploring my perception of the space, when my thoughts, as usual, were interrupted.