No items found.
Product is not available in this quantity.
LoginLogoutSubscribe
Footy 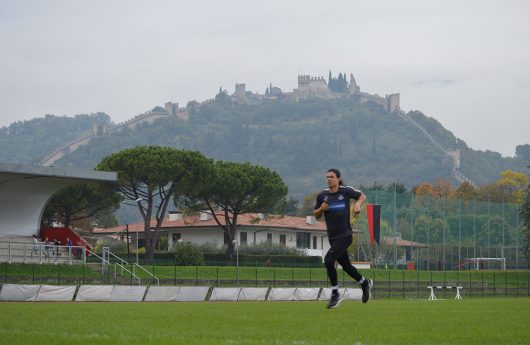 Following in his nonno’s and father’s footsteps, the nineteen year old Jack Silvagni promises to add luster to the name of a legendary family of Italian-Australian footballers

Though he wears the famous number ‘1’ on his back, Jack Silvagni focuses on what is in front of him. A young man, confident in himself and in his abilities, Jack has set himself up for a successful career, on his own terms.

Growing up with legendary football role models (his father Stephen and grandfather Sergio), it would be easy to let any perceived pressure of the Silvagni legacy get the better of him. Jack isn’t buying into it.

“Number 1 has been part of the family since nonno played.” He adds, “I don’t think there’s any added pressure. It’s more about the monogram on the front of the jumper. That’s what you’re playing for. You can’t rear your head and look at the back of the jumper while you’re playing.”

Despite his high-profile family, Jack has managed to remain grounded and clear minded about his own adventure in the world of professional football. He acknowledges the significant impact his father and grandfather’s careers have had not only on the Carlton Football Club, but also on the game in general.

Jack’s attitude toward his family’s legacy is a healthy one. Though he respects and is grateful for the path made before him, he is excited to see how his journey will appear, keen to make his own mark on the game.

“I try to steer clear [of advice] to be honest, just stick to what the coaches tell me. Do my own thing. Play instinctively. Dad’s my first port of call. Footy is slowly going past Nonno, he’s still stuck in the old days of contested footy. Dad’s still on top of it all, so I ask questions.”

Chatting with Jack you forget that he’s only nineteen years old. He speaks from the heart, has realistic expectations of what the future holds and is highly articulate in his ability to discuss his challenges and expectations. Like any other young adult, Jack is studying alongside his football career. Finding a balance between work and play can indeed be difficult: Jack is learning to work through his double degree in Commerce and Property at Deakin University. Despite this, he remains the eternal optimist, driven and focused on what he wants to achieve.

Speaking of his school days, Jack assured me, “I was a good student. I was organised. I hated being disorganised.” Jack also studied Italian at school. “I pick up on little things. I am a very poor speaker of Italian. I used to be good, but I stopped it in year 11. I just lost it… When Nonna starts speaking Italian I switch off because they speak too quickly.”

Jack put his remaining linguistic skills to good use on a recent trip to Italy in search of his Italian heritage. The Silvagni family has a very interesting lineage, originating from the northern Veneto town of Asiago. The family’s first connection with Australian soil came by way of Giacomo Silvagni’s immigration in 1924. Supported by Virgin Australia, a Platinum sponsor of the Carlton Football club, Jack embarked on a journey that would change the way he viewed his family forever. This intimate experience was documented in the touching film ‘Bloodlines: Giacomo to Jack,’ which unpacks why Giacomo moved to Australia and the significant impact the early Silvagnis had on Asiago.

Italian-Australians will connect with Jack’s journey: hidden treasures reveal themselves, secrets are shared, and whispers of information that would otherwise remain hidden for eternity are revealed.

Throughout the film, Jack references the “unknown” of Giacomo’s experience moving to Australia. He migrated alone, entering a world completely unknown, unsure of what the future would hold. I asked Jack if he noted any similarities between his great-grandfather’s journey and his own transition into the ‘unknown’ world of professional football.

“I had been around the club since I was little. I had dad and Nonno to lean on for advice and questions. I think in that sense it wasn’t so ‘unknown.’ Fitness-wise and mentally, routine – that I didn’t know.”

Jack paused, reflecting on his own experience to date.

“Speaking with Nonno, Dad never spoke about moving out [to Australia]. It wasn’t a topic for conversation at all. We weren’t to talk about it. He didn’t really give a reason for coming over. I think that the fact that he came over not knowing anything, for the story to be passed through generations still with no knowledge of why… that’s the biggest difference.”

Though a loaded question, I was keen to find out if Jack identifies as an Italian-Australian.

“I guess it depends how you are brought up. I was brought up in a footy family.”

I couldn’t help but ask what would have happened if he brought home a soccer ball. He laughs, “It never really interested me to be honest.”

Jack is hoping for a long prosperous football career, and is counting on celebrating many premiership success stories in the future.

“Aspirations for all footballers – they want to be premiership players and win a flag for their team. I don’t think it’s any different for me. I’d love to be a dual, triple, quadruple premiership player, if I could be. I’d love to win a flag every year if I could. I want to be remembered as someone who was passionate and played for the jumper, courageous and loved the club. I think that’s the culture we’re breeding here.”

I asked Jack about his competitive spirit, to which he responded, “My drive’s internal. Obviously there are external factors impacting on that at times: the coaches, Mum, Dad, brothers, family, mates. It could be any of that. I want to do well because I want the team to do well, myself to play well, my mates to play well, and that has to be naturally internally driven and can’t be relied upon by external factors. I’m competitive because I hate to lose. That’s the main reason I’m competitive. But now, playing in such a team with such a proud history, there’s more to it.”

Playing with the glow of two football generations in his stride, Jack will ensure that the third instalment of the Silvagni legacy is one built on integrity, passion and commitment to a club that has enriched their lives in innumerable ways. I for one will be watching closely with bated breath.