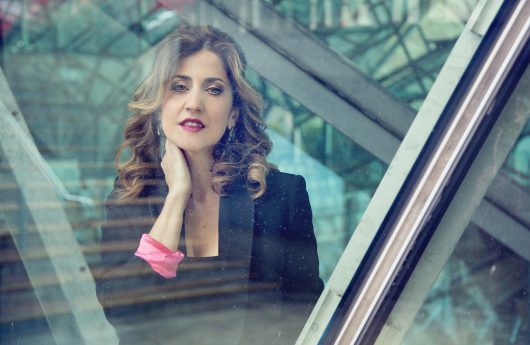 Bringing two worlds together with the art and joy of singing

For those who grew up hearing the iconic song for Coppa Del Nonno’s commercial, “Joy, I feel good, I feel fine”, Gisella Cozzo’s voice might already be endeared to those childhood memories and fondness for ice cream.

In person, she is petite in stature and exudes a grand openness and graciousness that feels welcoming to be around. It is in her smile, I thought, vibrant and genial, already greeting you as a friend though you are meeting for the first time. On a surprisingly sunny day in Melbourne’s mid-winter, I caught up with Gisella after her interview with Rete Italia radio in Fitzroy, where we ducked into a nearby Quaint café.

Gisella Cozzo rose to prominence in the late 80s, when she won Australia’s longest running talent show, “Young Talent Time”. At the tender age of 16, she toured with renowned Italian singers and per- formed live as their support act in Australia, giving her the recognition as a bonafide singer. “It was a time where I was trying to find myself, my direction as an artist and discovering my talents”, she says of her experience working with established singers of the 80s and 90s. Her musical aspirations took flight, literally, taking her to London and, later, Italy, where she worked with leading Italian songwriters and producers. It was in Milan, where she was able to truly expand professionally.

For an emerging and foreign artist, to sing in Italian proposed another level of difficulty. Gisella candidly laughs, recalling the translation mistakes she made in her early career learning the mother tongue. “But being bilingual has given me great strengths and great characteristics in my career”, she says of her story of being an Australian singer making it in Italy. “They know me as the Aussie in Milan”, she says proud of that distinction, for Italians support her double identity enabling her to build on that uniqueness.

With more than two decades of experience in the entertainment industry, the breadth of Gisella’s work is vast and varied. she is a singer; english vocal coach and producer of her own label “Mamigi Publishing”. Interestingly, her most extensive work as a singer is in television commercials. Her crisp and warm voice has been the audible campaigner for global giants such as Coco-cola, Levis Jean’s, Nutella, Mercedes and most recently Chiquita Banana commercials in Europe. she is a favourite strategy employed by television advertising. In Italy today her name has become synonymous with the title of the “Queen of Jingles”.

Despite enjoying much success as a jingle singer, Gisella wanted to develop her recording career, especially in the Italian language. “I wanted to challenge the Italian artist in me…to demonstrate to the Italian listeners that I can and do sing in Italian as well”, she emphasizes.

Gisella Cozzo is in Melbourne to promote her latest album, “Double”. The title is derived from her concept of recording songs in her spoken languages english and Italian. The album comprises her original tracks and remakes of golden oldies from the two cultures, such as Tony Renis’ “Quando Quando Quando”and Australian rock band, Moving Pictures’ “What About Me”. In this way, Gisella is honouring her dual Anglo-Italo heritage and paying tribute to the singers who have taken the songs to an international stage. Notably, it is on this album where Gisella recorded more songs in Italian than she ever had before.

Though she features well-known english and Italian music of yesteryears on her album, Gisella gives these oldies a new pulse and takes them on a new modernized spin. Her collaboration with music arranger and producer, Carlo Palmas, resulted in the creation of backing tracks that are up-tempo, dance and pop, effectively repurposing the back- bone of the song and revitalising its lyrics. With the songs recorded in a second language, the english lyrics meet their Italian counterparts, and vice versa. However, this does not mean it is a direct translation of the lyrics. Instead, the songs are adaptations previously recorded by other artists, and newly interpreted with her artistic touch.

“I hope listeners can appreciate the bilingual nature of the album… feeding their curiosity and letting them choose which version they prefer to listen to”, she says, bringing to mind an Aussie Italophile clicking on iTunes “Per Ricominciare”, the Italian cover version of Gloria Gaynor’s “Can’t Take My Eyes Off of You”. Indeed, for some listeners, it might come as a surprise to find an originally English song sounding even better when sang in its Italian rendition. With her musical talents encompassing languages of two countries, she might be Australian and Italy’s answer to Celine Dion.

The fact that Gisella is able to rework timeless pieces competently is because she herself is a veteran of producing enduring music. As the writer and singer for one of the longest running commercial jingles in Italy, she knows the renewable qualities of a catchy song. Now in its 20th anniversary, “Joy” is celebrated once over for its continued limelight. It is currently on air for the 2015 campaign with Coppa Del Nonno.

In October “Per Ricominciare”, Gisella’s second single from her album “Double”, will be released on all Italian radio networks. This track is the Italian version of one of the classics “Can’t take my eyes off of you”. A real gem for her Italian fans as this track sets off a new start to Gisella’s recording career singing also in Italian. Only Mina, the Italian icon and songstress, sang it live in 1968 but only live. “Per Ricominciare” will be one of Gisella’s first time ever full Italian recordings.