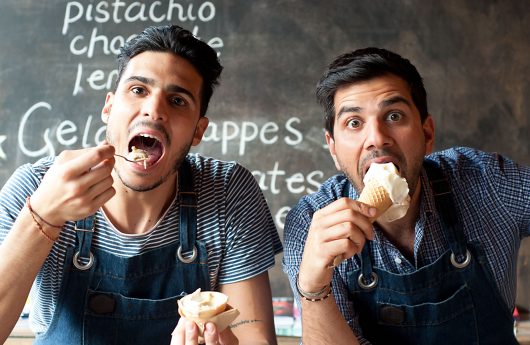 The story behind the creators of Il Melograno

When I first visited Il Melograno, an extremely cosy café and ice cream parlor located in Northcote, I was suddenly struck by the beauty of the place: its nature-inspired design made of wood and earth colors, the smiling faces of the staff, the cabinets full of delicious pastries, everything conveys a warm and friendly atmosphere with light aromatic notes of sugar and coffe.

As soon as I met the co-founders, Carl Foderà and Marco Enea, and chatted with them about the birth of their café, my enthusiasm strenghtened to the extent that I wasn’t sure I would find the right words to describe their story! It seems like destiny played an important role in bringing those guys together, allowing Melbourne to have, in simple words, a real artisan gelato! But let’s proceed in an orderly manner…

The Italian word gelato comes from the Latin gelatus, which means frozen. The habit to consume chilled drinks or food, the mountain snow as refrigerant, dates back a long, long time ago. Italy is nowadays recognized to be the birthplace of gelato, but only thanks to the Arabs, that settled in Sicily at the end of the IX century, the forefather of the current ice cream was created: a refreshing blend of fruit juices and snow called “sorbetto”, sorbet in English, to better challenge the Sicilian hot weather.

Since then the ice cream has come a long way. A formal applause occurred during the Renaissance at Caterina De Medici’s Court of Florence when Ruggeri, a local food passionate poulterer, won a contest named “The most unusual dish you ever seen” with his frozen dessert, an ice cream produced with a secret recipe that made all the court chefs green with envy. Around the same time another step was taken when the Florentine architect, Bernardo Buontalenti, added milk and eggs to the existing blend, inventing il gelato italiano as we know it today. Again, a century later and thanks to the Sicilian Francesco Procopio, founder of the Procope Café in Paris, the ice cream’s fame spread worldwide without stopping and… there they are, Carl, Marco and their ice cream shop Il Melograno!

Having both a Sicilian background, the art of making ice cream was probably in their DNA. While the young Marco grew up working at his family gelateria in Palermo, Carl, ten years older and born in Australia, graduated in Arts at the Monash University, completed two Majors in Communication and Italian studies, then moved to the Bel Paese guided by the goal to become chef. That desire remained unaccomplished and he ended up in Rome, working as buyer for an international toy company. After ten years Carl quit his job with a clear, strong will: coming back to Melbourne to give the city a fresh, genuine Italian specialty. But, which one? Still uncertain he started looking for some inspiration that eventually found in Sicily during a fun, long vacation also remembered as “A whole month devouring granite siciliane in the small, remote Alicudi Island”. Pleased with the granita experience, Carl’s curiosity about local food increased! He moved to Palermo eager to try the famous gelato and… he went crazy over it! Gelato would definitely be the main ingredients of his future, successful idea!

To start a business making ice cream is not easy and this is the reason why Carl took a tour of the city best gelaterie asking them for some training. Being Sicilian ice cream makers proud and jealous of the secrets of their job, Carl’s first attempts failed, till the moment he found Marco’s shop. His weird request to discover all about gelato made his future partner’s family initially suspicious but in the end Carl conquered their confidence and stayed there for three weeks. By a striking coincidence, Marco was at that time travelling around Australia with a working holiday visa, trying to find the right chance to remain Down Under. His opportunity was waiting for him, at his own place in Italy and, as a matter of fact, when the two finally met, they agreed right away to run a business together.

Carl has a long experience as a buyer perfectly complemented by Marco’s know-how about ice cream. Let’s add furthermore a deep, shared passion for this wonderful dessert and what’s the result? Il Melograno, which is synonymous of healthy and artisan ice cream.

Gelato made with commercial essences contains around 6-11% fat, artisan gelato is around 4%

Set in the heart of Northcote, Il Melograno, pomegranate in English, is a retail – wholesale shop café that offers its customers genuine food and sweets where no chemical preservatives nor stabilizers are used. Sugar and milk are the basic ingredients of a pure ice cream, and the idea of using semi-finished products is not even remotely admissible. More surprisingly, “Gelato made with commercial essences contains around 6-11% fat, artisan gelato is around 4%”, explains the chef Luigi De Luca. So don’t worry, Carl and Marco’s real ice cream is wholesome and luckily safe for any blowout! Of course when I went there I couldn’t stop myself from tasting all kind of gelato, being particularly surprised by the authenticity of hazelnut and pistachio and chocolate flavors, generally not easy to recreate. “If you’ll get the hazelnut you’ll make it” Nonno Bartolomeo, Marco’s grandfather, said in a pure Palermo dialect during a tutoring over Skype and I confirm, they made it! True, natural colors, velvety texture, in simple term: a divine pleasure.

Despite gelato, including sorbets, other delicacies are available. Granite and brioche with ice cream according to the Sicilian culinary tradition, pastries, a savory menu for breakfast and lunch based, mostly, on Italian innovative dishes rearranged to the Astralian standards. Even more, Il Melograno houses a small wood fire oven where coffee is roasted every Saturday morning, along with the natural Ricci Method. Could you imagine the aroma?

Anyway, I don’t want to reveal you anything more about Il Melograno, it’s your turn now to start a personal, sensorial journey. Carl and Marco are waiting for you, a scoop in hand, ready to serve the most demanding palate!