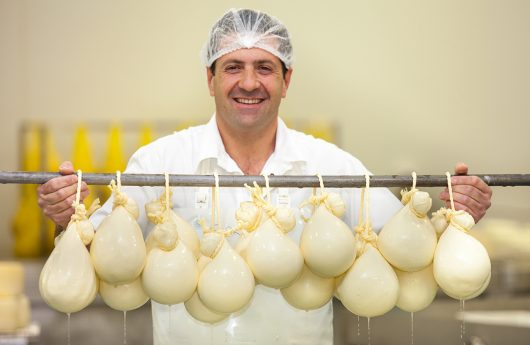 “YOU HAVE TO BE A ROMANTIC TO INVEST YOURSELF, YOUR MONEY, AND YOUR TIME IN CHEESE.”― ANTHONY BOURDAIN IN MEDIUM RAW

The native Sicilian arrived in Australia over ten years ago without speaking a word of English and without knowing anything about cheese making. How then, you ask, did he get involved in making cheese for a living?

In late 2007, Giorgio took a job as a factory worker in a large cheese factory. He became fascinated with the cheese making process and asked his brother in Italy to send him a book on how to make cheese. He rented a tiny room in the cheese factory and was arms deep in the arts of cheese crafting; making mozzarella, ricotta amongst others. “My tools were a small pan and bucket using 250 litres of milk per week. I was self-taught then, often experimenting with milk and rennet, wiring the dough in different ways. I was looking for new solutions and new products,” Giorgio says. He offered his limited production to Melbourne’s Italian restaurants and was overwhelmed by the positive feedback. Soon, in 2008, he founded That’s Amore Cheese.

What started as a one-man show with a bucket and a pan is now a dedicated team of forty-two staff in the new That’s Amore’s Cheese factory in Thomastown. Giorgio and his team specialize in producing close to thirty different cheeses that are unique to Italy. These include varieties such as the Diavoletti, Bocconcini Leaf, Burrata, Caciocavallo, Squacquerone, and Buffalo Mozzarella to name a few these cheeses Giorgio has successfully introduced to the Australian market. “One very important thing is that every single one of our products has different and unusual flavours,” Giorgio highlights. That’s Amore Cheese products are distributed to specialty food stores, delicatessens and restaurants, and tours the continent at food festivals and competitions.

On the home turf, Giorgio’s La Latteria is gaining ground as Melbourne’s best cheese shop. Countless online city guides and food magazines, such as the Broadsheet, the Urbanlist and TimeOut Melbourne, all list in their reviews La Latteria’s as the city’s best cheeses.

Located in Carlton, La Latteria is an integral member to the artisan food scene in Little Italy. The little shop is located on Elgin St., between the main thoroughfares of Lygon St. and Nicholson St, meaning people have to get off the main roads to specifically seek this treasure cove of specialty cheeses. “Customers here know the taste of artisan food and they come here to find that top quality product,” store manager, Katia, says, guaranteeing that the delicatessen is worth the mission for any cheese lovers.

At high noon on a rainy Friday, an array of customers paced its glossy polished floors ordering amongst a vast selection of cheeses, coupling it with dried cured meats, fresh bread loaves from Vincenzo Bakery and house-made desserts. This wasn’t your regular lunchtime crowd, these were people with refined palates looking to perfect their meals with a choice cheese pairing.

As expected, the most popular cheese ordered was the mozzarella. The milky-white plump globes of cheese are handmade in the shop, the shine on its smooth surface reflecting its immediate freshness. Each morning, the mozzarella is hand stretched and hand cut in the Italian tradition, rendering the cheese into a dumpling-shape with incisions to show where the cut was made. “Hygiene, good ingredients, care and love. You can’t negotiate on these four elements if quality is your ultimate goal,” Giorgio stands firm by his principles.

“I became a casaro (cheese maker) for the love of creating almost an unlimited number of products from just one ingredient, the milk. Furthermore, preservative-free, is a paramount of our philosophy” Giorgio explains his passion. He and his staff appear intent on bringing everyone on board with specialty Italian cheeses.

The Australian Dairy Industry has recently observed a trend away from bulky cheese’s and towards specialty cheeses. Giorgio is a steward for this movement. By providing locally made premium products, he ensures that Australians won’t have to rely on imported goods.

Another one of Giorgio’s great achievements is the creation of the That’s Amore’s Factory Outlet in Thomastown, which opened the 27th of August 2015. A modern and spacious shop where you’ll be able to tantalise your taste buds with palatable lunches, and sample freshly made cheese (manufactured by Giorgio’s as well as local and imported cheese), high quality prosciutti and many kinds of cured meats.

Cheese is displayed with their texture, odours and flavours… once inside the room our senses are fully engaged. However, as Giorgio has taught us, the journey at the That’s Amore’s Factory Outlet goes beyond a sensory experience; it offers, in fact, the opportunity to purchase these delicacies at competitive prices directly from the outlet.

At the “L’Angolo della Nonna” (Nonna’s corner) gourmet chefs are busy preparing hot dishes to try on the spot or take away.

As the factory and La Latteria, That’s Amore Mozzarella Bar also responds to Giorgio’s severe philosophy of freshness, preservative-free. Paraphrasing the text of the song he chose as the name of its factory, he can proudly sing: “When a cheese that you eat / Makes you feel like a king, That’s Amore Cheese!”