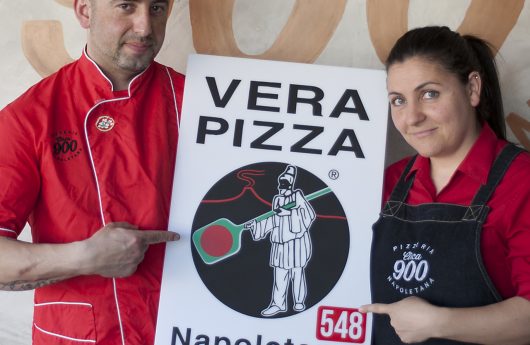 The only gospel for a Neapolitan pizzaiolo is to knead by tradition- al methods! The recent visit of the “TRUE NEAPOLITAN PIZZA ASSOCIATION” (AVPN) in Melbourne opened my eyes to the fabulous life of expert pizza masters who ‘travel the world, spreading the word’.

Making a pizza is like an alchemical process in which various elements play their part to transform humble flour into a golden and succulent disc of dough. Selecting the most suitable flour, rising time awareness, cooking time attentiveness, specifying condiments, the quality of water and even the climate are factors that a good pizzaiolo must take into account.

It is with this spirit that in 1984 the AVPN was founded in Naples. Ever since the non-profit organization, it has been committed to protecting the verace pizza napoletana. The genuine product is made, in accordance with the characteristics described in the “INTERNATIONAL REGULATIONS”; a severe protocol drafted by a committee of experts who are consulted to certify the ingredients used and ultimately the finished product. As a matter of fact the protocol establishes that only Campania products must be used.

A pizzeria that aspires to acquire the “PIZZA D.O.C. AVPN CERTIFICATION” has to match all the requirements that the Association put in place, and believe me there are many! However for those who refuse to standardize the process and invoke experience and tradition to refine the art, is awarded the prize of acknowledgement.

Marco Capparella is one of the fortunate pizzaiolo’s who have been bestowed with the certification. Faithful to the Protocol and a devotee to the Associations philosophy, Marco was born in 1978 in Naples. From a young age he worked at the family pizzeria in Naples where he mastered the art of pizzaiolo. In 1990, Marco landed in Australia and worked with various pizzaioli napoletani. The down under experience allowed him to further perfect his skills.

Marco and Anna holding the Certification issued by AVPN

“To be a pizzaiolo napoletano in Melbourne is an honour”, states Marco proudly. “My wife Anna and I are in this business together and we live by pizza keeping the traditions and educating people of the real Neapolitan pizza. It’s a true blessing for us.”

About two years ago Marco and his wife Anna were able to open their own pizzeria called “CIRCA900” in Kew, Melbourne. They recalled the many sacrifices made and focussed on their experience accumu- lated. No long after the pizzeria reached a peak in popularity and a suc- cess unthinkable a few months earlier. In addition, Anna and Marco’s loyalty to ancient traditions and the resistance against ‘industrialization’ of pizza drew the attention of the AVPN.

Last October, while the AVPN was making its first appearance in Australia, “CIRCA900” received the Certification of “TRUE NEAPOLITAN PIZZA”’ and became a member of the elite of the veraci Neapolitan pizzerie scattered across the world.

“The Award from AVPN”, Marco says, “is the most prestigious praise for a Neapolitan born pizza maker and a recognition for our hard work driven by an absolute passion. To be given this Award by the Association itself is an indescribable feeling.”

During my interview I learnt that the pizza secret lies in the dough rising. Accordingly I have hurried, in vain, to learn the recipe. However “the recipe doesn’t exist”, clarify Vincenzo Pace, President of the “TRUE NEAPOLITAN PIZZA ASSOCIATION”. “Dough rising changes according to the climate. For instance”, Mr Pace continues “if it’s cold, you need hot water and a little salt; if it’s hot you need less salt since it slows down the rising. These issues must be taken into consideration the night before, when preparing the dough.”Discouraged by his words…since I thought, mistakenly, I knew how to make a good pizza… what stood at the front of my mind was: the experience that refines the art. Circa900’s art is offered to each and every customer when they enjoy any one of their pizzas.