No items found.
Product is not available in this quantity.
LoginLogoutSubscribe
Young talents 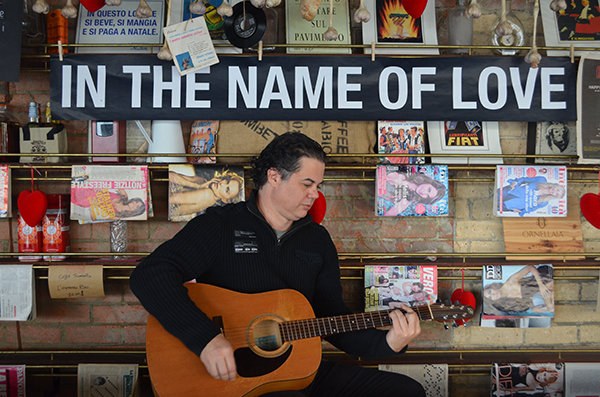 From Topping Pizzas to Topping the Charts: Inside Ashlley Walliss’ Double Life as a Pizzaiolo and Italian Songwriter

There is no doubt that restaurant owner and Pizza Chef Ashlley Walliss is in his element when he’s in the kitchen of his South Fremantle Pizzeria, L’Antica.

But what few of his customers realise, is that the humble pizzaiolo feels just at home in the recording studio with some of Italy’s biggest popstars. In fact, if Ashlley Walliss isn’t in his South Fremantle kitchen, it’s because he’s swapped topping pizzas for penning and publishing chart-topping songs for some of Italy’s biggest music stars including Francesco Renga and Marco Mengoni.

Walliss credits his Italian heritage for inspiring him to pursue a career in both hospitality and music. ‘Growing up there was always a love of food and a love of music that you were surrounded by. They have always been concurrent (and) I think that passion is something that everyone grows up with in different ways. For me, anything that is creative and creates an experience for other people are things I am equally passionate about and I jump in with full gusto’.

And jump in Walliss has. In the space of only a few years, the pizzaiolo has established Fremantle hotspot, L’Antica while simultaneously earning writing, publishing and producing credits on a string of number one and multi-platinum singles including Marco Mengoni’s Guerriero and Francesco Renga’s Il Mio Giorno Piu Bello Nel Mondo.

The latter was the first song in a series of collaborations with acclaimed Italian singer and songwriter Fortunato Zampaglione. The two met several years ago when a friend in Milan introduced Walliss, who studied at the Conservatorium for Music in contact with the songwriter. It was during that time that Zampaglione approached Walliss to collaborate on Renga’s single. ‘I remember we were in Milan having a gelato and he asked me if I wanted to do the publishing on this song he was working on and then we had a listen and there was something about it that I couldn’t click with, but I liked it…and then one day the penny dropped and it was full steam ahead’.

Although Walliss has always been surrounded by music, he admits it was a ‘surreal’ experience when he first heard the hit song on the radio. ‘I remember I was in a supermarket in Italy, and while I was choosing tomatoes it came on the radio. I sent Fortunato a message and he said, ‘congratulations on hearing your first song on the radio’. Walliss immediately looked around the supermarket to gather people’s impressions of the song. ‘It wasn’t so much that I was excited but more that I was satisfied that the job had been done properly’.

The song went to number one and paved the way for a number of collaborations between the two, with their most recent In the Name of Love being selected as the winner’s single for the latest season of Italian ratings juggernaut, The X Factor Italia.

‘Fortunato asked me if I would like to work on (the song) and of course I said yes because it is just a buzz working with him … when we do something it just flows like water’.

Walliss describes the hit single as a ‘battle cry’. ‘The song stems from the simple idea, that in good times and in bad, as long as you are being true to yourself and those you care about in the name of love, then love is all you need’.

Walliss recalls the excitement when he found out that Sicilian contestant Lorenzo Licitra was announced as The X Factor Italia winner and would consequently release In the Name of Love as his winners single. ‘It was 6am Perth time and I was watching the finale on a really weak Wi-Fi signal, which was really funny because we have this great song, great people, great studios and then the Wi-Fi in Perth was the only handbrake! As soon as it was announced Fortunato and I spoke with each other and we were happy, we are winners. And then I went to L’Antica to make Tiramisu’.

In addition to In the Name of Love, the songwriter collaborated on Francesca Michelin’s top ten hit L’Amore Esiste which was later re-released in English by Evanescence frontwoman and Grammy winner Amy Lee. ‘Amy was in Italy filming a video clip and heard the song on the radio, she shazamed it and found out it was Sony and got her people to call’.

Other career highlights have included collaborating with Fortunato on two of Marco Mengoni’s number one singles, Ti Ho Voluto Bene Veramente and Guerriero. Both tracks have gone five times platinum and helped cement Mengoni as one of Italy’s most in-demand pop stars. Walliss recalls that Guerriero came at a particular turning point in Mengoni’s career.

‘He had recently won The X Factor and his team was looking for a breakout song. Fortunato put Guerriero forward as a potential hit song for Marco and they all agreed. I sat in Fortunato’s studio and I had a feeling it was going to be big then it was released and it just went crazy. I remember saying to Fortunato that this song is good because anything that tickles people’s ears and makes them listen and go ‘oh what was that?’ will grab their attention’.

For now, Walliss has returned to his classical music roots and is working on a bilingual Operatic production of Il Piccolo Principe (The Little Prince), but the hit-maker hasn’t ruled out a return to the top of the Italian pop charts, hinting that some exciting collaborations are in the works. And while it’s not easy juggling a bustling restaurant in Western Australia and a blossoming song-writing career in Italy, Walliss still plans to continue working in both industries as they both fulfil him differently.  ‘At L’Antica, I don’t mind if I am in the kitchen, or washing plates, I’m just happy to be working on the experience. It’s the same with music, I do not mind what part of the process we are doing, as long as we are doing something. After all, Is the guy washing plates any less responsible for the pizza that arrives to the table than the pizzaiolo?’.

‘In the Name of Love’ is out now on iTunes.