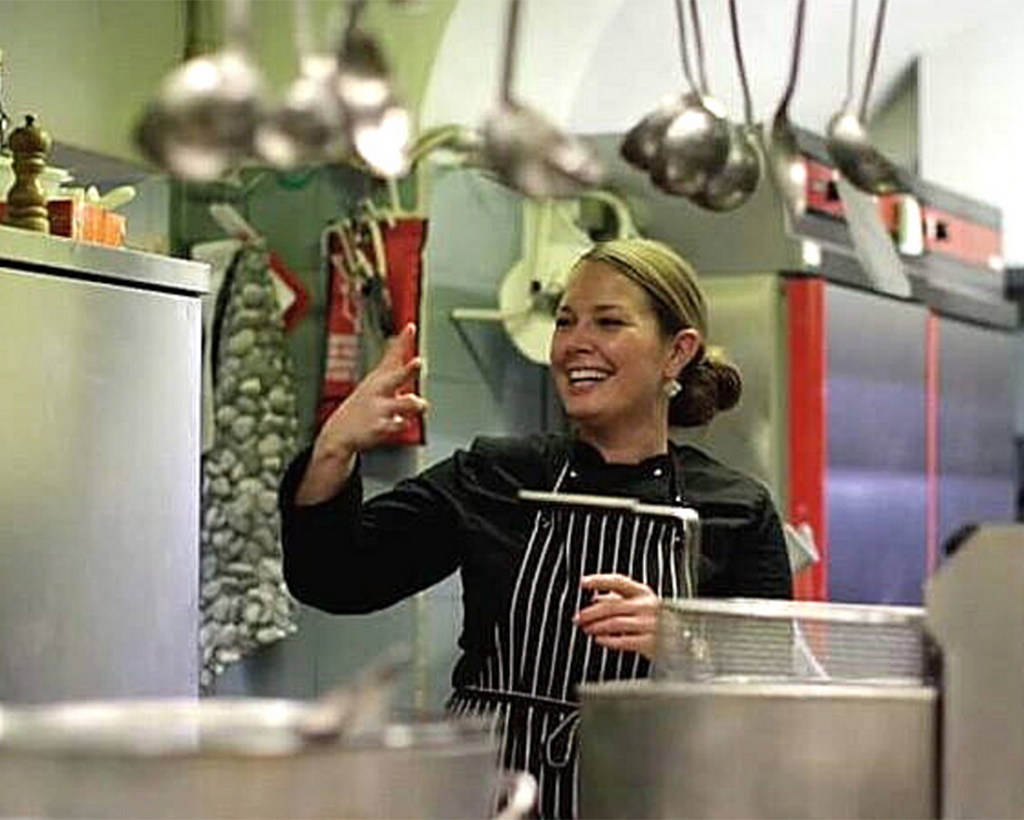 My mind conjures the image of a long outdoor table, set under the shade of majestic Tuscan pines, laid with mismatched linens and crockery. The table is decorated with olive branches and wild flowers, and boasts a plentiful banquet of cosy Italian comfort food, all made with love and passion. Every place setting offers a homemade bonbonniere, and the rich attention to detail seems deceptively effortless. There’s music, laughter, everyone’s glass is always full, and everybody feels welcomed and loved.

Kara’s journey to food has been far from conventional, proving that the power of instinct, intuition and curiosity have the power to outweigh formal culinary training.

Born into a typically British family, Kara’s fascination with food and cultural diversity began at a very young age. Her mother taught her the value of being a gracious hostess, polished silverware, and the joys of baking. Meanwhile, she felt equally at home amongst her father’s Greek work colleagues, and eventually with a Sicilian family, with whom she shared most of her formative years. Kara recounts memories of Greek Easters and weddings, and her ‘adopted’ Sicilian Nonna, who taught her skills she still draws upon today. A naturally inquisitive, open-minded and very ‘hands-on’ person, Kara has always loved to keep the company of other cultures.

As a young professional woman, Kara’s background was in design and fashion, which later progressed to visual merchandising. Proving that everything she touches turns to gold, she was regularly poached and headhunted by large fashion houses, both in Australia and overseas, for her ability to transform brands with deftly prowess. As a National Brand Manager, her twenties exposed her to a period of luxury and excess, involving regular business class travel overseas, and dining at the world’s most exclusive Michelin starred restaurants. Food, irrespective of the purpose of the trip, was always front and centre in Kara’s vision. So much so, that Kara regularly baked goods to share with her colleagues, and organised many formal events.

During this period of her life, Kara would seek refuge in various cookbooks, primarily to draw inspiration from the photographs. Kara tells me that her long working days would send her recoiling into what brought her most pleasure at home: cooking, and being in the kitchen. Irrespective of the trials and tribulations of her days, Kara found immense gratification in preparing elaborate dinners. This process was about sharing and showing love, relaxing, and taking comfort in knowing that her kitchen was always waiting for her.

Fate dealt Kara a hand she was not expecting, and her life’s journey quickly changed. Finding herself in Italy, she needed to decide whether to stay, or return home to Melbourne. After an initial six-week period in Florence, which whet Kara’s appetite for la vita italiana, she began seeking out opportunities that would allow her to remain in Italy.

One such moment came when she responded to a job ad seeking a live-in cook in exchange for room and board in Lido Di Camaiore in Versilia, on the Tuscan coast. Kara proved her worth to the landlady by preparing a sumptuous traditional Italian Easter feast for the other boarders in the house. The meal was such a success she was granted the job, despite initial hesitations on her ability to cook because she was Australiana.

All the while, Kara continued to play with her love of design and food. She kept a diary of food photos of all her delicious creations, and eventually began a food blog, ‘Kara’s Italian Kitchen’. The blog caught the attention of Benetti, the luxury yachting group, and Kara was employed as the on-board chef for their summer charters. She speaks so fondly of her time with Benetti, sailing the coastline between Italy and France.

After six years in Viareggio, Kara moved to Pietrasanta, another Tuscan town close by, where she worked three summers as a chef in Giorgio Armani’s private villa in Forte Dei Marmi, hosting numerous lunches for guests such as the Bocelli and Frescobaldi families.

At the end of a very intense summer work season, Kara would head south and spend time in Sicily, chasing the last of the summer sun and returning to a place where she felt ‘at home’. She calls this the ‘recuperation period’. Kara was able to spend time connecting with people in small towns, working with and learning from the locals in bakeries and restaurants, healing her soul with food. This process, which she often repeated, taught Kara many of the artisan techniques she now uses to this day.

Kara also worked for the Australian Embassy in Rome over a four-year period. Prior to her return to Australia, she became the Ambassador’s full time private chef. Given complete creative license, Kara was able to call upon her instinctive approach to cooking, guided by her innate visual and taste memory palette.

Nowadays, Kara is still most often found in the kitchen via social media, though is back home in Melbourne. Although she has worked in some of the most opulent settings, her down to earth nature is surprisingly refreshing. Her approach to food is filled with enthusiasm to keep things simple and seasonal. She continues sharing her love and passion for Italian food, traditions and eating rituals, and Kara’s mantra Buona Domenica! (Happy Sunday) welcomes us to slow down, eat well, and enjoy the cooking process as much as the end result.