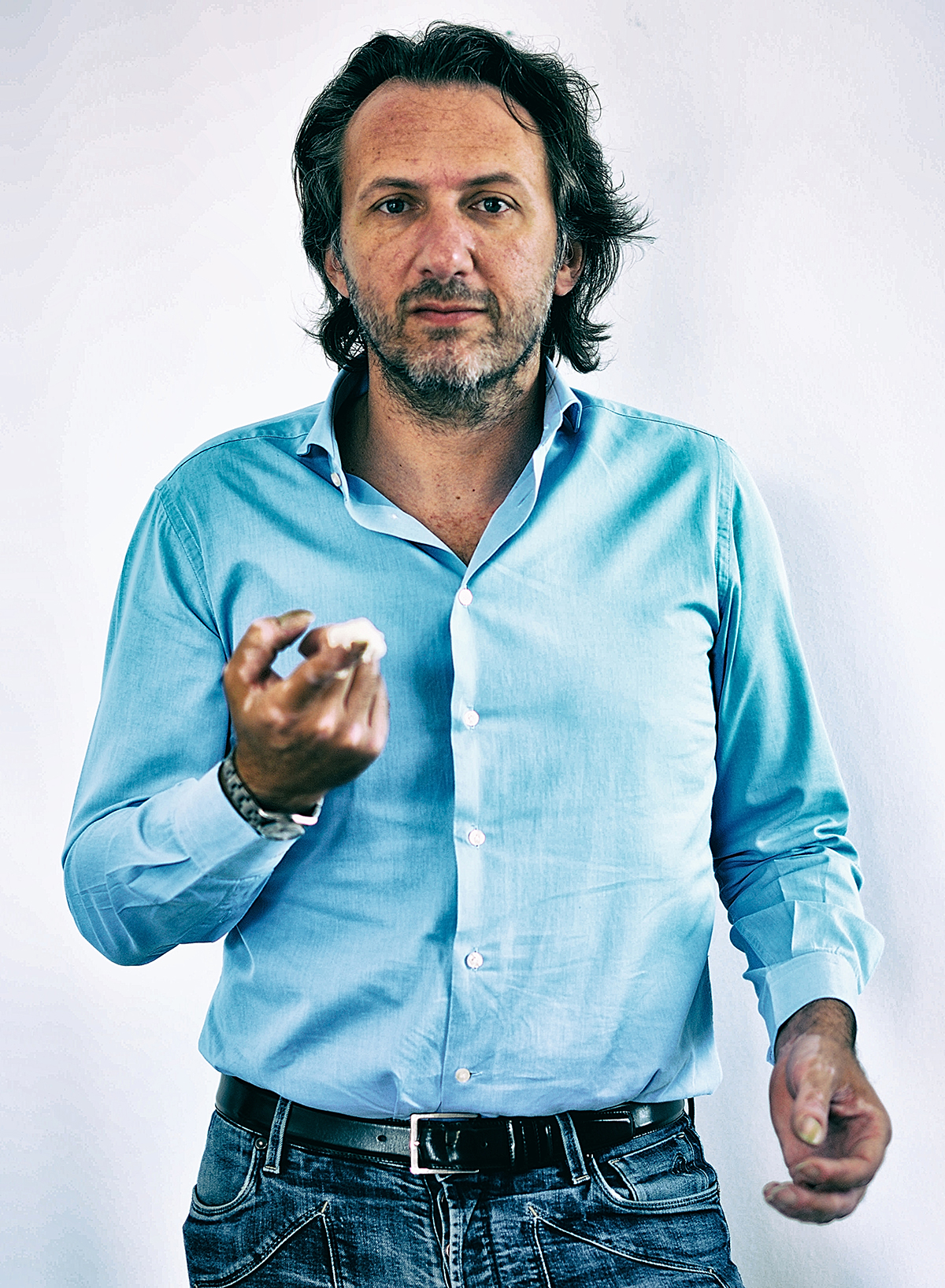 The North Italian Gorgonzola cheese can be traced back to the 9th Century.

This creamy characterful cheese is one of Italy’s finest. And you’ll find plenty of elegance and taste in the Gorgonzola cheeses from the award-winning company Arrigoni, which has won numerous gold medals in international cheese competitions. Jesper Storgaard Jensen went for Segmento for a finger-licking visit. (In the photo Marco Arrigoni, Arrigoni CEO)

‘The main concern for us gorgonzola producers is the welfare of our animals. Nothing is more important than this, not only for the animals themselves, but also because healthy, well-groomed animals will, quite simply, produce a higher volume and of higher quality milk.’

Gian Battista Arrigoni holds my gaze to make sure I’ve understood the concept. His old white pick-up van jerks back and forth on a bumpy road, just outside the small northern Italian town of Pagazzano, south of Bergamo, in Lombardy. We are on our way to the Arrigoni farm, which from the outside looks like any other of the thousands of small, non-industrial agricultural farms in this area.

But this one is different. Here something special is going on. In addition to ‘animal welfare’, another buzzword is ‘quality’. Gian Battista Arrigoni says it again and again ... la qualità. And in fact, the quality of the cows’ milk is so high that it constitutes the basis for Italy’s number one gorgonzola cheese. It is right here that you find Italy’s finest, mould-delicious titbit, capable of making any cheese lover ecstatic. As a matter of fact, several of Arrigoni’s gorgonzolas have won gold medals at international cheese competitions in recent years. We’ll get back to that later.

The “King’s Cheese” of Northern Italy

The gorgonzola is known around the world. And if you ignore the Grana Padano, which is used like a parmesan cheese and produced in gigantic quantities in the regions of Lombardy, Veneto, Piedmont, Emilia-Romagna and Trentino Alto-Adige, then the gorgonzola is considered the most widely consumed cheese in Northern Italy. Today, production takes place in the areas around Milan, Como, Pavia, Bergamo and Novara, and the final product is so tasty and delicate that its nickname has become the “King’s Cheese” of Northern Italy’.

The gorgonzola cheese is one of the oldest blue mold cheeses in the world and its origins date back to the 9th century, ie. about the same time period when the French Roquefort was discovered. The history of the cheese’s origin relates to the transhumance, the seasonal change in grazing area that cows often pass through. This means, even to this day, that the cows have to walk for long distances to reach new and more fertile fields. When the transhumance took place in the past, a break were often held in the small town of Gorgonzola. The cows had gone for a long way and were tired, which would give their milk a higher fat content. And this was actually perfect for the production of the creamy cheese. Since it was milked at Gorgonzola, this, of course, should also be the name of the final product.

‘The Arrigoni-family has been present here in the Bergamo-area since the mid-18th-Century’, says, showing me a family tree he just printed. He himself is the third generation in a business that started in 1914, when founder Battista Arrigoni returned to his Italian home region after a stay in Texas. From focusing on another North Italian cheese, Talleggio, for several decades, the shift occurred in the 1980s when focus was put on to the gorgonzola, which began to gain significant market potential. This decision was taken as a result of the establishment of the “Gorgonzola Consortium” in 1975. Today, the consortium has a total of 37 member companies producing the moldy cheese, which today is protected by EU’s Protected Designation of Origin (PDO) predicate.

Gian Battista takes me to the stables. His pride is big and his passion strong which I especially feel, when he speaks about the animals.

‘What you see here is a category of top cattle. Here we have about 400 cows. This is our eccellenza, ie the very best. The cows’ DNA is completely scheduled, and we in this way we are able to breed cows with a milk production that is perfect for the gorgonzola. Notice the small ribbon they have around their hoofs. Inside it there is a small computer that gives us any kind of information about the cow and its health. How much is has eaten etc. They eat three times a day and they are weighed three times a day, and through this small computer we are able to analyze the quality of the milk. A cow that does not move and lose weight, is a problem, and we’ll need to intervene to provide a treatment’, he explains.

It almost seems that Gian Battista has a personal knowledge of each of the 400 cows. He then delves into an almost scientific explanation of how a US computer-controlled program analyzes the milk and makes a calculation of what types of crops, and in what quantities, must be put together to give the cows the optimal fodder mix. As he explains: ‘Only through animal welfare, a perfect fodder blend and technological know-how you’ll be able to create a top-quality product’.

The next day, at six in the morning, I meet another member of the Arrigoni family. His first name is Alberto, and he is responsible of the entire production apparatus and the fourth generation of the Arrigoni-family.

We are both wearing a semi-comical hair net, a thin hygiene suit as well as plastic bags around our shoes, as though we were heading towards a birthing room. Hygiene measures are taken very seriously, and before entering into the production area, we need to wash our hands and shoe soles.

‘Here we make seven different types of gorgonzola, as the Rossini with marc from pressed grapes and Lucifero with chili. But also, the BerghemBlu Riserva which is our new Gold Medal cheese. Today the market mostly requires sweet gorgonzola which accounts for 95% of the entire consumption. The fact that we produce seven different kinds of gorgonzola means that we have differentiated ourselves in relation to the different markets,’ Alberto explains.

From a quantitative point of view Arrigoni’s production is not huge. Only nine employees are involved in the production cycle, from the milk enters until the final product is put onto trucks for distribution. Alberto takes me to a large tank full of milk. A few employees are in the process of adding the blue mold bacterial cultures, the substance that in the ripening process creates the blue-green shades of the gorgonzola and gives it the tasty flavor.

‘Here we add penicillium roqueforti, the ‘bacterium’ that gives color and flavor to the cheese. It has an incredible power. For every 3,000 liters of milk, just 50 ml of penicillium roqueforti is added. We have a daily production of about 700 entities of the round gorgonzola, which is significantly smaller compared to a typical industrial production, which often manages to reach a daily production level of four to five thousand pieces. But obviously we are speaking about two different products from a quality point of view,’ Antonio says.

As we move from one hall to another, down through the production apparatus, the product becomes more and more complete. And finally, in the last big cold storage room that we enter, before even the packing begins, I can finally feel the classical gorgonzola scent, coming from hundreds of piled up gorgonzola forms, which tickles my nostrils in such a pleasant way.

The last stage of my visit is an interview with the Arrigoni-CEO, Marco Arrigoni, who once again underlines what I have already experienced, that ‘quality’ is the only thing that matters to Arrigoni.

‘There is a lot of competition on the gorgonzola market. We only have a market share of 3%, so we have had to choose the most competitive market parameter, which is … la qualità. Fortunately, this choice has been reflected in the many international cheese competitions in which we have participated over the years,’ says Marco and looks at me in quite a proud manner.

And his proudness is perfectly understandable. For the past three years, at the annual World Cheese Awards, Arrigoni has been rewarded with the prize given to the world’s best gorgonzola cheese. In the latest edition, in October 2019, Arrigoni received a gold medal for the “BerghemBlu Riserva” cheese and another five medals, among more than 3,800 competing companies.

Today, the gorgonzola consortium’s marketing testimonial is the popular chef Antonio Cannavacciuolo, who is a judge in the Italian Masterchef-program and at the helm of the two Michelin-starred restaurant Villa Crespi. But years before him quite a sensational figure, former seven-times prime minister Giulio Andreotti, was photographed with a finger in the gorgonzola.

Well, if you got the chance to taste the world’s best gorgonzola, I bet you would do just as Andreotti did!