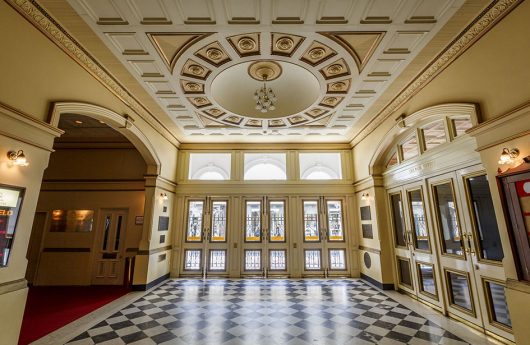 In todays ever-changing digital landscape consumers are constantly looking at faster ways to access entertainment. The increasing popularity of social media and streaming services such as Spotify and Netflix have seen traditional mediums of entertainment including film, television and radio struggle in recent years.

It is remarkable that one of the oldest forms of entertainment, opera, has managed to continuously engage with audiences for hundreds of years. The works of many great Italian composers such as Giacomo Puccini, Gaetano Donizetti and Giuseppe Verdi are still performed today all throughout the world, hundreds of years after they first debuted on the stage. Opera has the ability to continue to resonate with audiences today, reinforcing that there is something incredibly unique about the opera as a form of art and entertainment.

While the works of Donizetti, Puccini and Verdi have been performed throughout Europe for centuries, the history of Opera in Australia is relatively new whilst still making a huge impact on our cultural landscape. This year one of Australia’s oldest opera companies, the West Australian Opera Companycelebrates their 50th anniversary. Founded in 1967, the company made their debut with Carmen in 1968, headlined by Opera Legend Dame Joan Sullivan who was the company’s first patron. Since then, the West Australian Opera Company has brought many adored Italian Operas from Aida to Tosca and Madama Butterfly to the stage at the iconic His Majesty’s Theatre in Perth.

For this year’s special 50th anniversary season, Cohen selected two beloved Italian Operas, Puccini’s gut-wrenching Tosca and Donizetti’s equally tragic Lucia Di Lammermoor, starring Italo-Australian Opera singer Aldo Di Toro in the role of the doomed lover, Edgardo. “It’s a devastating role and opera and it’s one of my favourites,” Di Toro proclaims. Despite Lucia being written in the 1800s, Di Toro credits Donizetti’s writing style for why the tragic opera has stood the test of time and continues to resonate with audiences today. “Donizetti’s vocal writing goes straight to the heart,” he says. “There are no barriers, no filters, no wasted bars of music.

The struggles of the characters are the same challenges of today: politics, unrequited love, conflict within families, impossible love stories and miscommunication.”

Di Toro who was born and raised in Perth, credits his Italo-Australian heritage for influencing him to pursue a career in the arts. “My Italo-Australian upbringing definitely influenced my career choice. There was always singing and dancing at weddings and parties. The Uncles would sing Neapolitan songs at the top of their voices at the end of the parties. And my love for the music of the Australian singer-songwriters and the carefree sunny Australia of the 1980s, all naturally led to the musical, nomadic life that us opera singers live.”

While Di Toro had an interest in the arts, his first foray into opera happened by chance. “I got involved in opera by mistake. To escape the footy oval in high school, I decided to audition for the school musical in the warmth of the school gym. The musical was an operetta which I loved and which led to later studying opera.” It was a decision that clearly paid off. Di Toro now regularly performs in both Italy and Australia and has taken the opera world by storm having performed around the world in London, Tokyo, and Cape Town. Despite his international success, Di Toro always looks forward to returning to Perth: “West Australian Opera is a great company. I started in the chorus there and His Majesty’s is a stunning theatre where I’m still ‘paying my dues’.”

While Opera might not have as rich a history in Australia as Italy, Di Toro believes Opera is appreciated on a similar level in both countries: “I would say opera is appreciated in Italy about on the same level as in Australia. Italy has suffered direct cuts to opera for the past fifteen years, whereas Australia perhaps, is only feeling the financial pinch in recent years. Of course, the Arts are the first thing to go when things tough in the economy, but both societies have their fair share of aficionados who keep the opera world going.”

Brad Cohen who has served as Artistic Director at the West Australian Opera Company since 2015 agrees, claiming appreciation for opera is  ‘ truly international’. “Opera knows few boundaries. Where the singing voice meets stories and emotion, opera will always be appreciated,” he says. Cohen credits the West Australian Opera Companies’ passion for enduring and prospering in an age where most entertainment industries are struggling. “Our passion – and our mission – is to tell stories through the singing voice. This simple proposition has ensured loyalty from our audiences, interest from new attendees and wide-ranging support in our community. In a relatively isolated, but important, city like Perth, a local opera company holds a unique place in people’s hearts.”

Cohen acknowledges that it is difficult to reach out to new audiences in such an oversaturated market where people, especially younger generations, tend to turn to other forms of entertainment that are familiar or easier to access.  “Entertainment is always changing. Think of the music hall, or the drive-in, or any form of culture, which was once popular and now is in decline, our challenge is to present and constantly renew an art form which is timeless, but which for some people is intimidating or foreign,” he says. “Like the best olive oil, the best opera is a product made with care and demanding standards but to a simple recipe. Interesting younger audiences in an art form, which can be unfamiliar, is our biggest challenge, and that is why education… is so important to us. We want children and young people throughout Western Australia (WA) to think of opera as exciting, captivating and a pleasure – not as a ‘high art’ duty.”

To commemorate its 50th anniversary, the West Australian Opera Company are taking their beloved art form across the state. With their Opera in the Regions season, they are giving opera lovers a rare opportunity to enjoy the opera against the backdrop of some of WA’s most picturesque outback locations including the Pinnacles and the Valley of the Giants. Innovative ideas combined with the grandeur of their traditional productions like Tosca and Lucia; ensure that the future of Opera and Italian story telling in Western Australia will continue to soar.