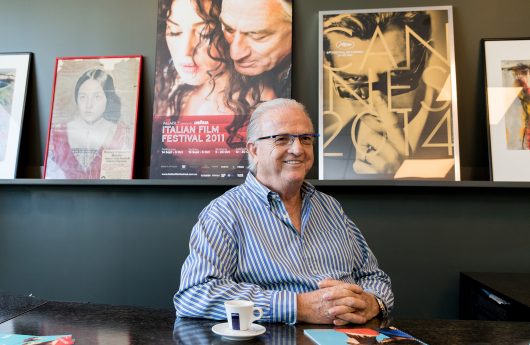 The rise and rise of a movie theatre empire

The story of Australia’s largest independent cinema chain and founder of Palace Cinemas, told like a film

Palace Cinemas is an Australian film distribution company and Australia’s largest independent cinema chain. It operates over 20 cinema centres nationally with 85 screening halls and employs some 500 staff. Later this year it will open a new 14-screen complex in Sydney’s Broadway precinct with another 10-screen one in Sydney’s harbour side suburb of Double Bay in 2018. It has also announced plans for a 15-screen complex to be built in the heart of Pentridge, Melbourne’s former prison that has entered a new phase of redevelopment.

Antonio Zeccola founded this thriving organisation forty-five years ago and intriguingly enough, the way it came about could inspire a film genre Palace Cinemas specialises in. It is a story that has been likened to Giuseppe Tornatore’s celebrated film “Cinema Paradiso”, with its beginning presenting quite a few similarities.

If it were to be made into a film, the story could start this way.

It is a sunny late September afternoon in the port of Naples. A woman and her six children—five boys and one girl—are boarding a ship directed to Australia. Her pensive facial expression brings about a flashback. The colourful image of a town lying over a mountain fades in and the camera slowly zooms toward one of the old houses clustered along the mountain slope. The scene gradually shifts to the house interior where the woman in question is engaged in a crucial talk with her husband:

“Australia could be like Brazil,” she says anxiously. “You told me it was a land of opportunities but you found there a harsher reality than here and were forced to come back with nothing. I don’t know if I could bear another disappointment apart from the toil of minding six children alone.”

“This time it is different,” he argues. “Australia is not like Brazil. My brother says that I would easily find work and earn good money.”

“Your brother was a prisoner of war there and didn’t have to provide for six children!”

“Yes but if he was happy as a prisoner, can you imagine how good life can be for free people! You’ve got to let me go. What future can our children have if we stay in Muro Lucano? I heard this year Melbourne will host the Olympic games. It must be a booming city.”

The film crosses back to the family group staring at gulf of Naples and Mount Vesuvius as the ship is slowly drifting away in the twilight of a warm early Autumn day. The children watch the scene with excitement except the second oldest of them, a fourteen-year-old young man. He looks absorbed in his thoughts as he gazes at the horizon. Another flashback shows him following his father who is carrying under his arms two big film reels. The man enters a building next to a church while the boy stops at the door and looks around until he sees a girl sidling along the street wall as if she is trying not to be noticed.

“Quick… come!” urges the boy trying to contain the volume of his voice. The girl abandons any hesitation and runs towards him, taking her by her hand and whispers with confidence: “Come with me.”

They disappear inside the building and reappear as they enter a hall with rows of wooden benches and hung over a small stage is a large white screen.

“Soon it will be full of people. My father told me it’s a funny movie with Alberto Sordi. It’s titled ‘Hail to the dollars!’ It’s about a poor man who migrates to South Africa and becomes rich working in a diamond mine. My father will soon leave for Australia and will come back with a lot of money…”

The girl looks at him with sadness.

“I hope it will be like when he left for Brazil?”

People start flocking into the hall and the scene shifts to a booth where the boy’s father is busy securing a film reel to a projector. He then looks into the hall through the booth’s little window and sees his son sitting next to a girl in the front row. He smiles and pushes a button switching off the light in the hall. The flashback ends as the film begins: trails of smoke rise through the light beam in the darkened hall.

This film adaptation is not a precise re-production of the real story but the essential elements are factual. Antonio’s father Giovanni ran films in the local parish hall. His brother was a prisoner of war in Australia and encouraged him to try his luck in this country. Giovanni left for Australia the year of Melbourne’s Olympic games after a failed attempt to settle in Brazil. His wife Geraldina with their six children reached him travelling on a ship they boarded in Naples in late September 1957.

The fourteen-year old boy Antonio truthfully left his sweet heart in Muro Lucano and was never to see her again. Once in Melbourne his initial experiences were similar to those of many Italian young men who migrated to Australia in the post-war years. Hard work but his father was right: Australia was not like Brazil.

He worked in a bakery from 8 pm to 8 am making bread with his own hands in a time when there were no electric kneading machines. He slept very little: during the day he worked as an errand boy for a grocery store and a shop assistant in a shoe shop.

The passion for cinema inherited from his father remained in him and eventually convinced him to do in Noble Park – Melbourne’s south-eastern suburb where he was living – what his father did in Muro Lucano: showing films to people who couldn’t otherwise enjoy them.

Most Italian immigrants didn’t understand English and were cut off from cinema entertainment. He started providing it to them by projecting movies imported from Italy in town halls and other venues. From there to opening his first cinema the step was short. First came the Pix Cinema in 1963, followed by the Metropolitan Theatre in Brunswick. Next came Palace Cinema on central Bourke Street, which he acquired when it was soon to close down, revamping it with art-house films not shown in mainstream cinemas.

Palace is due to become the name of a large network of cinemas that are still expanding today. It is the home to a series of international film festivals, including the Italian one, which attract large audiences each year in all major Australian state capitals.

Antonio Zeccola has been strongly supported throughout his career by his wife Karen and their four children who now work as key executives in the organisation. Antony, the eldest, is the business development manager; Benjamin was recently appointed as the new chief executive; Elysia directs and oversees Palace’s film festivals, and Stephanie is the national marketing manager.

If a film were ever to be made out of Antonio Zeccola’s story, the last scene could show him alone in one of Palace Cinemas screening halls, intent on watching “Hail to the dollars!”