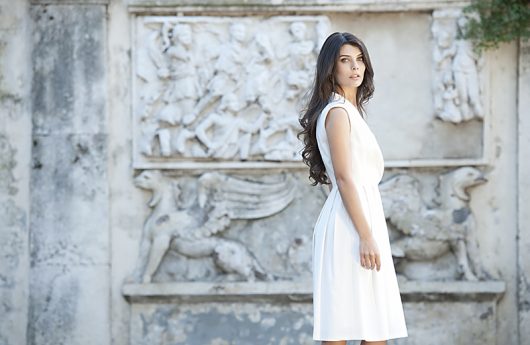 Ciriana is an attractive and highly educated woman in her late thirties who works as a managing partner of a Rome subsidiary of a blue chip American consultancy. Fifteen years ago she had a beautiful love story with Maurizio – they met while they were studying at the University of Florence. After graduating, they both got a scholarship at New York University and moved to New York together. Their love bloomed in the Big Apple: they were looking forward to being married and having a happy life together until something happened that set them apart.Ciriana has long recovered from her heartbreak, though she still wears the scar of it. She has since remained single, devoting herself to her career. One day she receives an email that shatters her peace of mind: it’s from Maurizio. She refrains from reading it but she cannot help from reading the subject line: “I dream to see you in your granny’s pearls again.” These words have the effect of re-opening the wound which she tries to sooth by visitingher family and talking about the email with the only person whose judgement she can fully trust, her mother. This new chapter reveals what made Maurizio disappear from Ciriana’s life.

They were about to graduate from the law faculty at New York University in merely two months, with the plan to return home for good.

Their families talked about investing money in a common venture – a small law firm – where the young couple would start their jobs. But first they should get married! The plan however, failed.

Wham’s “Last Christmas” video evokes an understanding for and Maurizio’s desire to spend at least one last season’s holidays having fun with friends at the snow, rather than at the table with parents and cousins.

With the young couple’s enthusiasm awakened, Ciriana and her boyfriend invited a massive group of friends to an amazing ski resort in the Catskills Mountains. Young and beautiful, clad in branded ski wear, exploring unbelievably well-prepared hills, experiencing cross-country skiing and backcountry tours, they were spending the last days of the year enjoying their freedom.

Ending up each day enjoyably tired in one of the aprè ski bars and clubs, they were engaging themselves in playful uncommitted flirting, dancing, drinking and lazy conversations about professional dreams. It was in one of those moments when Ciriana noticed an uncommon interest of one of the girls in her own boyfriend.

Diana, was new to the circle of friends.

She had just appeared at the NYU campus moving from the west coast. Her parents who lived in California, were allegedly getting divorced and they had sent their daughter away to earn some space and “put things in order.” Diana seemed a spoiled daddy’s girl with her year-round tan and a constant need to focus other people’s attention on herself. It appeared that this time the toy she was aiming to get was a handsome foreigner, Maurizio.

Diana was different from Italian girls. She looked tacky for Ciriana’s taste with her multi-coloured skin tight clothes and heavy make-up that she wore at all times, even on the slopes. Her style was completely different from how Italian girls used moderate colour shades and tonalities; how they preferred exposing natural rather than fake attributes. Diana’s looks were bringing associations with a colourful exotic bird attracting everybody’s glances.

Ciriana was used to other women around her boyfriend, likewise with Italian boys flirting just to pump up their egos. She was there, however, side by side, guarding attentively her territory, not a bit less attractive than her partner or any of the young girls around. Until the day of an accident that changed everything.

It happened when craving the excitement of exploring the backcountry. With untouched white powder the group decided to go for off-site skiing. One improper decision based on misjudged situation and Maurizio was lying flat on the hill, his eyes shut, the helmet thrown apart and the crimson stain growing on the white from behind his head.

It looked terrible, but Maurizio was alive, rescued immediately by energetic friends, supported later by their mighty parents and by Ciriana herself, scared to death.

The boy spent nearly two weeks in a state of coma and then long weeks and months in a hospital looked after by his girlfriend, his soccer team fellows, boys and girls visiting him less and less frequently.

The good news were that he was slowly but consistently recovering, unfortunately his head damage did not allow him to be transported back to Italy. Ciriana’s university term was coming to an end; she was no longer able to stay in the US. She came back to Florence but instead of celebrating her new degree she was exhausted and clueless about the future.

The two families were doing all they could to ensure that Maurizio had the best medical assistance money could buy. Weeks and months were passing by and everybody expected that he would finally return home. Instead, to the family’s bewilderment, they got his phone call with a statement that he was staying in New York and getting married to Diana, the only person who stood by him in this difficult time.