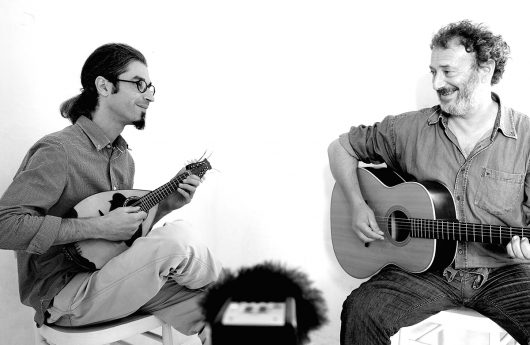 Mandolin, the icon of stereotyped Italy, which the greatest classical composer wrote for

I have known Mauro for years. Our mothers were work colleagues, and we often hung out together as teenagers, playing at being musicians. He played several instruments, including the accordion and the guitar. We both had long hair (yes, I once had long hair!) and we performed together in local rock bands.

Our passion for traditional music was strong and we would frequently visit the local artisan workshops (traditional music hubs), to immerse ourselves in the history of our land. For Mauro, this knowledge also was transmitted through his family (he used to accompany his grandmother as she sang). My parents came from different regions, so I needed to seek out this local heritage and it became familiar only because of my deep curiosity.

Our paths diverged for several years, and then we met again in the 1990’s at University. In Bologna people would gather in the squares to share songs, dances and good wine. Traditional music was alive though we were far from home, and we felt that the fight against globalisation somehow included the fierce claim on our musical roots. Mauro played the accordion brilliantly and had also mastered proficient technique in frame drums. His interest in folk music led him to continue research in Apulia, where he began to attend the barbershops and to learn the art of a beautiful instrument: the mandolin.

That’s right, the instrument known as an emblem of Italian style worldwide, whose name is used as widely as pasta and pizza, whose music is so often used in Hollywood to belittle the richness of our culture and reinforce the stereotypes linked to Italy.

The Mandolin’s place in the popular word developed in the 19th Century. Before this though, the Mandolin already had a significant history. Its origins are uncertain, although current studies place the first references to the instrument in the 17th century. As Mauro recalls in an interview with me last year at a country house near our hometown, the Mandolin and its music does not only belong in Naples.

“We know that there we find the oldest mandolin makers in the world, but musically it was Naples that drew much from the rest of Southern Italy”.

The Italian mandolin repertoire encompasses a wide variety of music. In many cases, dance music, used mostly in the popular festivals and the old barbershops of Southern Italy.

The instrument spread (and slightly varying models were built) in other parts of the peninsula. It was not Naples, but Padua, to appoint the first professor of mandolin in its Conservatorium, in 1975. A considerably long time after the other stringed instruments. Its use in folk environment has perhaps devalued the instrument in the eyes of Italian musical institutions, who forget that Vivaldi, Mozart, Paganini, Beethoven, and Paisiello all composed for Mandolin.

Now more and more Conservatoriums will offer Mandolin. Mauro for example, just enrolled at the Conservatorium of Bari. Strangely, however, graduates of the diploma program are not eligible for teaching positions. Yet another discrimination for an instrument that is increasingly chosen by young Italian instrumentalists. The mandolin would surely be given more importance in the current music scene if institutions would assist in its diffusion.

Mauro, a gifted instrumentalist, chose the mandolin as his instrument among all others. Or, perhaps it is the mandolin that chose him, enamoured by his hands, and driven by the desire to break free through him, from an identity obscured by stereotypes from which it does not feel represented. 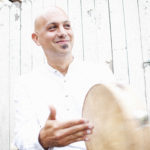