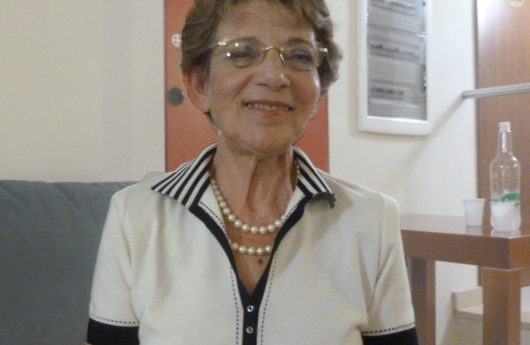 Born in Viggiano, Basilicata, Delia Estelle Giliberti, is an elegant lady with a soft voice and eyes that hold your attention as she speaks. We meet on a rain soaked afternoon in her native town, where she is visiting for the Festa Della Madonna from Liguria where she now lives.

The very first thing she does is telling me how grateful she is to be asked to share her story. She does not divulge her exact age, and I do not press the point, however she is anything but the stereotype many may have of the elderly in Italian villages of the South.

Dressed in a short sleeved white blouse, hair immaculately done, and wearing fashionable spectacles, Signora Delia has a youthful demeanour that I soon realise must have stood her in good stead throughout her life.

Like so many before her, she followed her husband to Australia across the many long miles of ocean. Unlike many of them however, her husband had not sailed to Australia ahead of her in search of work or opportunities. Mike Giliberti was born in Australia, his parents themselves children when each had made the journey with their respective parents out of Italy. They were truly migrant pioneers from the early part of the last century.

Hers was not a voyage in search of a better life, she was quite content with the life she led she tells me. It was a journey to go to the only home her husband had ever known, the place where he had made a life, before deciding to travel to Italy and the town of Viggiano in particular, to see his parents’ birthplace.

“Mio suocero aveva un negozio di vini a Melbourne, in Spencer Street, proprio in centro città,” (My father-in-law had a wine shop in Melbourne, in Spencer Street, right in the heart of the city) she informs me. “Stavano abbastanza bene. Ma Mike era curioso di vedere il paese nativo dei genitori e nel 1961 è venuto con alcuni amici come turista più che altro. Nel giro di quattro mesi ci siamo conosciuti, fidanzati e sposati. Un fulmine d’amore.” (They were rather well off. But Mike was curious about the village his parents hailed from, and in 1961 he set off with some friends as a tourist to see it. In the space of some four months he and I met, were engaged and married. It was a lightning bolt romance).

As the only daughter, Signora Delia realised that her parents would be heartbroken by her decision to marry a man who had no intention of settling in a small Italian village. Yet she felt compelled to follow her heart, and made the commitment to undertake the month long voyage to a country she admits she knew little if anything about.

“Peró mi mancavano i miei,” (I missed my family) she admits. “I miei suoceri mi trattavano bene, molto bene. Non mi mancava niente in un certo senso. Ma non riuscivo a lasciare la solitudine, la malinconia. Non riuscivo a fare amicizia, neanche con i vicini di casa. La lingua Inglese non mi veniva facile. Ho imparato abbastanza per fare le cose utili, la spessa, prendere i mezzi…ma…” (My in-laws treated me very well. In many ways I lacked for nothing. But I couldn’t shake off the solitude and melancholy. I couldn’t make friends, not even with our neighbours. I couldn’t grasp the English language. I knew enough to get by for shopping, transport, and yet…). She pauses and looks past me into the distance as though recollecting something still pressing on her thoughts. “E non c’era quel senso di vita del paese. A Melbourne tutti partivano presto per lavoro, tornavano a casa tardi e stanchi… Ero sola più che altro. Sola e senza la lingua, allora non c’era niente con cui riempire le giornate.” (There wasn’t the lifestyle of village life. In Melbourne everyone left early for work, and came home late and exhausted…I was alone more than anything else. Alone and without the language so there was little to fill my days with).

Signora Delia tells of a Melbourne that was largely closed after business hours, with cinemas and restaurants more or less limited in both their scope of offerings and their availability, especially to a young woman with time on her hands.

“In Italia il sabato e domenica si passavano tra amici,” (Weekends in Italy were spent with friends) she goes on. “Anche se si faceva soltanto una passeggiata era già qualcosa, ma in Australia non si usava la passeggiata. C’era bisogno di mettersi in auto e fare chilometri e chilometri per andare nel “bush” come dicevano gli australiani. Non era per me. Ma soprattutto era la lingua. Quella mancanza di lingua conta tanto sai.” (Even if it was a simple stroll it was enough, but in Australia this wasn’t the norm. One had to get in a car and drive long distances to go to what the Australians referred to as ‘the bush”. It wasn’t for me. But above all it was the language. That lack of a language counts for so much you know).

By 1967, Signora Delia had a son and decided he should see his grandparents. She took him to Viggiano while her husband-by then working for Ansett Airlines, stayed behind. It was then that she realised she did not want to live in Australia any longer. Unable to get work there, work is found in South Africa. That is where the small family transferred, living in both Zambia and Tanzania for a further six years and adding a daughter to their number.

“Ed ecco che la compagnia per cui mio marito lavorava in Africa lo ha trasferito a Milano e dopo dodici anni ci siamo trovati di nuovo in Italia!” (And so it was that the firm my husband worked for transferred him to Milano, and after twelve years we found ourselves back in Italy eventually.) However Milano was not to Signora Delia’s liking as a place to raise children at that time and so she took herself and them to Liguria, where she had family while her husband commuted every two weeks or so to be with them.

When I ask her if she thinks her life would have been different had she returned with her young family to her home town rather than Liguria to live, Signora Delia sighs and raises an eyebrow contemplatively. “Chi lo sa? Erano altri tempi. Erano tempi diversi rispetto ad ora.” (Who knows? They were other times, different from the present).

And then, just as we draw the interview to a close she adds, “Alcune volte io e Mike ci rendiamo conto che forse abbiamo sbagliato a lasciare l’Australia. Mio marito, adesso in pensione, dice, “Che paese è l’Italia? Ma il passato non si può cambiare.” (Sometimes Mike and I wonder whether we erred in returning to Italy. My husband, now a pensioner, sometimes utters: what sort of country is Italy? But one can’t change the past).

But of course Signora Delia smiles warmly and her eyes hold me long enough to suggest that whatever the case, they did what they thought best at the time, and that somehow that was all that really matters in the here and now.