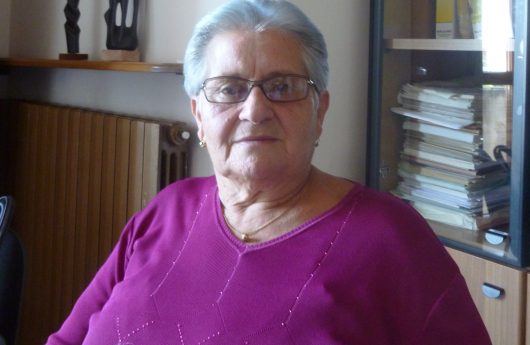 Their future in their past - Part 3

‘Nella mia testa, io cammino per le strade d’Australia, perche’ me le ricordo tutte. Tutti i santi giorni…Io sto qua e la.’ (In my mind I walk the streets of Australia still, because I remember them. Every day. I am both here –in Italy-and there.)

So starts Signora Giuseppina Sico, a wonderfully vivacious 66 years old native of Tramutola in the Basilicata region of Italy, whom I met in Villa D’Agri, as she reminisced about her time as a younger woman living in Australia in the late 1960’s and early 1970’s.

Unlike many of the people I spoke with, Giuseppina didn’t leave her native country after being sponsored out, nor did she leave in search of work. Rather, Signora Sico left Italy to follow her new husband to a country he had already become familiar with after having lived there from 1961 to 1964. They had been school friends and were familiar with one another before her future husband’s decision to seek better work opportunities alongside his four brothers who were already settled Australia. His brief return to his village was time enough for the two to marry and then move on to start a new life on the other side of the world.

‘A quei tempi in campagna non c’era lavoro… Mio marito decise di andare in Australia, con una certa sicurezza perche’ aveva famiglia la’.’ (At that time there was little work outside of the land…My husband chose to go to Australia because he felt some certainty because he had family members already there.) By the time they both migrated to Australia, Giuseppina knew that her husband was already confident of having work, of having some grasp of the foreign culture, and more significantly, in helping her transit from life in a small southern Italian village, to one in what was then a very English-style city like Melbourne.

Possibly because of her youth, possibly because she had a desire to learn, Signora Sico managed to learn English fairly quickly, taking great pride in telling me that she used television as a means to acquaint herself with the language, and how the good nature of their Australian neighbours helped her navigate the early difficulties. She fell in love with what she said were the quaint nature of the little wooden houses that lined the streets, and the general openness of the vistas.

Tellingly though Signora Sico had no direct relatives of her own in Australia, yet she spoke with enthusiasm of the fulfilment she felt at being able to find work as a seamstress, of how her work was appreciated by Italians and non-Italians alike. She was made to feel valued and her work important.

One of her fondest memories of Australia oddly enough though, was of the night she and her husband arrived by ship at Princess Pier, caught a taxi and presented themselves to her husband’s relatives unannounced. The audacity of such an act is difficult to comprehend in these days of Facebook, smart phones and satellite navigation. But in the mid-1960’s, it was a measure of the determination and compelling desire to overcome and move forward inherent in the spirit of people like Signora Sico and her late husband Vittorio.

Insightfully, Signora Sico makes a distinction few others I interviewed made so candidly; Being a tourist in a country and being prepared to live in that country are very different things to get one’s head around. To decide to migrate involves being prepared to make sacrifices that themselves are not knowable until the move has been made.

‘Il distacco dalla famiglia e’ una cosa triste,’ she said with a slow nod and a heavy sigh. (Leaving family behind is a very difficult undertaking.) She added though, that ‘Quando a una persona una cosa piace, si adatta a tutto.’ In essence she was adamant that it is so much easier to adapt to a new land when one likes it there, and she loved Australia. If not for her husband’s failing health, and the advice of a doctor that he would be better off back in Italy, and if not for the practical calculation that their income would not be improving with her alone working, then perhaps Signora Sico would not have been back in the Basilicata region to see out her life.

But as I was to discover time and time again, these were nothing if not practical people, accustomed to making practical, even if not the most desired, decisions, predicated on the need to both support and raise their families in the very best way they could.

And this Signora Sico did, returning to Italy in 1974 with a daughter born in Australia and tied by tradition and heritage to the land of her parents, thus bringing the circle round to close where it had started, but as Signora Sico put it, enriched by having lived in a country as bountiful as Australia.

As we were saying farewell, Signora Sico added that she and her husband Vittorio had often talked about perhaps returning to Australia, but ultimately her husband maintained that he could not bear to be buried in a cemetery so far from ‘home’. As the son of migrants it was a refrain I had heard before, and one I realised only those who have left their ‘other’ lives behind can fully understand-and appreciate.