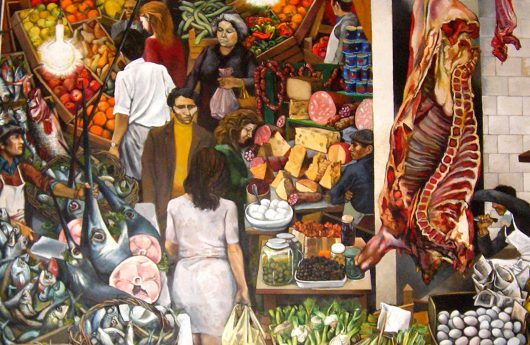 OOD: THE STATUS SYMBOL OF THE HASHTAG GENERATION!WHEN FASHION OVERLAPS CULTURE My mother-in-law lives in an apartment in a small city in Apulia. Her balcony faces a piazza, where the food market is held twice a week.

The fishmonger holds the stall directly outside the bedroom window. He is a leathery man who leaves a cigarette in the corner of his mouth, letting the ash drop to the ground as he screams about the catch of the day. He starts doing this at about 6am on a Saturday at regular thirty second intervals, not unlike my childhood pet Julian the rooster.

‘Tutto a mille lire!’ The man is also stuck in another time and currency.

My mother-in-law buys fish once or twice a week, on the days the markets are held. She also buys her eggs at 20c each from a local farmer. She buys whatever veggies are in season at that same market. She often buys legumes from sacks there, or flour for making fresh pasta, like orrecchiette or ……. from her native Sicily.

Like most eighteen year olds, when I moved to Italy, I didn’t really know how to cook. I could fry an egg and assemble a couple of gourmet dishes, but I didn’t yet understand the art and science of cooking.

I learnt from my then-boyfriend’s mother. She always had ferments and beans soaking on the kitchen benches, overflowing boxes of produce in the reception of their dental practice, which they gave away to patients. She and her family had a huge influence on the way I ate as a young adult. As a vegetarian in Tuscany, I learned to cook pasta, rice, and soups using legumes, fresh produce and day-old bread. I boiled potatoes and ate them with salt and olive oil. I learned to identify a few varieties of wild mushrooms, cook them and serve them on piles of polenta.

When my current partner and our daughter moved back to Australia a few years ago, I was a young mother feeding a toddler and a growing fetus. Like most people in their twenties, I probably spent too much time on the internet, and that is something else that has influenced my personal food culture. When we moved here, increasingly concerning to me was the quality of food we were buying, and I was comforted by the term ‘organic’. I found that stuff much more readily available here in Australia than in Spain, where we’d moved from.

In Melbourne we could grow some veggies in our own backyard, and order boxes of organic produce to supplement whenever we needed it. The boutique grocery shop on the corner sold organic peanut butter and biodynamic sourdough for around 8 dollars a loaf. My corner of the web filled with food terms like #vegan, #paleo, #glutenfree and my personal favorite, #eatrealfood.

We kept living on soups and vegetables, and found that baking our own bread would be necessary if it were to continue to be such an important mediterranean staple for us. For the rest of it, we slipped right into what I’ve come to consider Melbourne food elitism. In Australian cities, expensive organic food buyers talk about what good value six dollars is for a stick of butter, and how if you just go without (insert frivolous item here) you won’t notice spending the extra money. They don’t realise that they sound exactly like Joe Hockey comparing the cost of a doctor’s appointment to a schooner of beer.

Has Australia allowed food to become a status symbol?

We are currently living in country Victoria, and at a cafe in town the other day I had a conversation with a local organic farmer. He and his family are planning on visiting Italy for the first time, and he told me he was most excited about visiting the small farms there. “We live this life, with small family farms providing food for the village, and we instagram it. It’s fashionable in a way. I want to go to see these small farms in Europe. Small family farming… without the hashtag.”

I considered his words and wondered if he may be romanticising Italy’s food system. I thought about the way that the European Union laws oblige each member state to fulfill certain quotas for the export of their produce, meaning that the orange you buy in Valencia could have come from Sicily.

Also, is Italy really a hashtag-free zone? The buzzwords have certainly arrived there too, with kilometro zero (#km0) on shops and stalls everywhere, but the wise words of a small-scale Australian farmer articulated something that I’d been pondering for a while. Throughout Italy, eating healthy local food is a sacred daily ritual and these movements make little difference to the way most people already live. In Apulia, at least, there is nothing cool about growing food, or making your own bread.

Italians don’t need to hashtag #eatrealfood. They are too busy eating it, preparing it, and always, always talking about it.