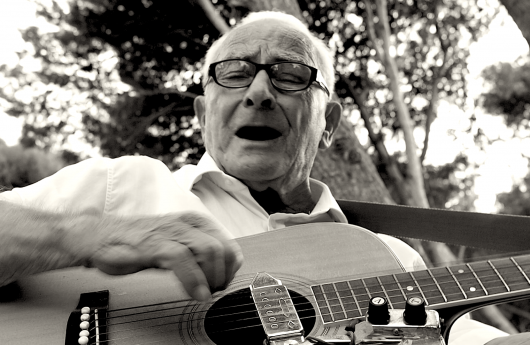 Witnessing history and sacredness in a former old distillery We recieved a text from Enzo at around 5pm. The ‘Pizzica Spagnola’ event is on at ExFadda at 7.

We laughed, assuming he meant some event involving the Jota, the folk music from the Castille region of Spain where we used to live, very different and far less fashionable than Puglia’s lively Pizzica. We rolled our eyes, because in Puglia, at this time of year, you really can’t accept every invitation, you’d be out of the house all day. Also, if we hadn’t fully embraced the Jota after all our years in Spain, then surely now, that we were in Italy documenting the Italian folk revival, was not the time?

Somehow we ended up there though. The ExFadda in San Vito was an old oil distillery and is now an ‘urban laboratory’, a space for creatives and scholars to unite in what Italians call a centro culturale. The beautiful limewashed stone walls were painted in sparse murals. There were wooden installations and colourful examples of craft everywhere. There was the kind of purposeful silence found in a library or a sacred space. When we walked in, an old lady in a house dress was sitting at a bench, her wrists flicking up and down as she worked with a crochet needle making a lime green doily. It was expanding visibly in her hands, and she was surrounded by young women watching in awe.

They do this type of thing so well, the Italians. The country is full of these spaces for artists, artesans and intellectuals to find each other. They are usually beautiful, old, repurposed buildings, like this one.

There were people of all ages sitting around but everyone was enraptured by the speakers, who were actually not at all concerned with Spain. Enzo must have misunderstood. They were talking about Pizzica and the anthropological research that has been done on the dance ritual. I sat down on overturned beer barrels to make oil pastel drawings with the children, as their father filmed the speeches. They kept quiet and allowed me to listen for about ten minutes. Then we were asked to keep it down by the organiser, but he quickly withdrew his request, proclaiming that children shouldn’t be silenced and it was unfair of him to have asked.

We took them out anyway, to a bar across the road where they were grilling meat on hot coals and offered to make us a mixed plate. I tried a local wine from a large, fancy glass, though it was probably more suited to a tumbler, perhaps even a plastic cup. The suprise of the evening was maretti, tiny sheep livers that really do not taste like offal at all. As I gave it a nod of approval I was told that the delicacy was typical of San Vito and a particular favourite of my late father-in-law. This made me smile, because though he is gone, he is somehow ever present as we rediscover Puglia with his two grandchildren.

We crossed the road and went back to the ExFadda in time for the final concert, and as I re-entered the old distillery its high ceilings again reminded me of a church. Three chairs had been set up beside the conference speakers for the musicians. The accordianist was my partner’s first music teacher, who apparently must have gained one kilo per year in the 25 years since their last class. The singer was Lino Sabatelli, an elderly man with very thick glasses.

He was the last living member of a group of musicians who used to actually participate in the ancient ritual surrounding Pizzica Pizzica. He would enter peoples homes to play for affected tarantate, curing women from the debilitating tarantula’s venom through music and dance. This was a special thing.

Lino always used to perform with his wife until her recent death, and though his lonliness could be felt in the room his voice rang clear and strong. It seemed nearly impossible that the sound could be coming from a 90 year old man.

As he played people got up to dance. My daughter was one of the first, jumping and twisting in her little white dress, curls bouncing. Some older ladies stepped back onto her bare toes but she didn’t stop dancing.

As I looked across the crowd I saw a woman around my own age with long dreadlocks, and tanned feet strapped up in grecian style leather sandals. She was staring at the musicians with tears streaming down her face. Another stared pale-faced out at the dancers, partipating with demure flicks of her hips and barely visible bounces onto the balls of her feet. One hand hung by her side, the other was held over her heart.

There are moments, in Italy, where one realises that they are tasting a delicacy that has been prepared in a certain way for decades, and has probably always tasted the same. There are moments where one is aware of witnessing history. There are times when one is so moved by culture that the tears flow freely in a public place. There are times when the sound of guitar, tamburello and voice bouncing off stone walls makes one ponder the differences between a church, and an old oil distillery.