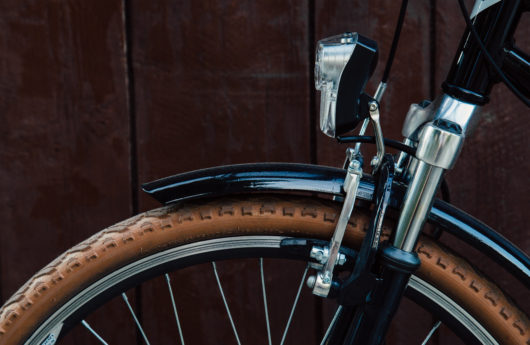 I gave myself an early birthday present this year: a bicycle, with a trailer for the kids, complete with jaunty red flag to keep us seen. It resolved a significant transport problem for our family. I really love riding with my children. It feels like walking around with a newborn baby, because people are constantly smiling at us as the little ones wave from their chariot.

The bike means I don’t have to make extra time for exercise, and we can remain a one-car family, even though we live in a small country town.

It was also a nostalgic purchase for me. If the second half of my twenties was all about babies, perhaps the first half was all about bikes. They had names, they got stolen, they got replaced, they got me from A to B.

So when I started riding again in those last weeks of being a 20-something, I felt like something had come full cycle. Pardon the pun.

Most of my biking memories are from Italy. In 2007 I was one of the 80,000 students that go to study in Bologna every year. The University of Bologna is the oldest in Europe, and students make up almost a third of the city’s population. There are ancient classrooms occupied as squats, graffiti, dark corners and stray dogs. But Bologna is undeniably beautiful, with buildings the colours of a desert sunset. And freezing, with dark snowy winters.

Going to uni in Bologna means setting aside a day to wait in line for your student card, and spending nights drinking wine from nutella jars. A second-hand bike is the best method of transport available, and they can be purchased on Via Zamboni for about fifteen euros. I owned three over the years I spent there. I named them Frida (Kahlo), Isabel (Allende) and Eva (Peron), because in your early twenties there is still just enough childhood left over to make you want to name your bicycle.But there’s nothing innocent about the process of buying a second-hand bike in Bologna. They are sold in the arcades in front of the most ancient rooms of the University, guarded lazily by dogs with swollen teats, and filled with heavily pierced individuals who shuffle back and forth with one freshly painted bike after the other. Every student who buys a bicycle there accepts that it will be stolen back before their degree is completed. Cut from the racks while they are in class and sold to someone else.

When it happened to me, I complained to my friend Illaria, on our way to buy ‘Isabel’, the first emergency replacement.

‘Everyone has to eat.’ she had said with a shrug. Her argument was elaborate. The people who sold the bike would then take the money to buy, let’s say, dog food. The pet shop owner would use the money to buy rice, and so on.

‘At what point is the money clean?’ Italians don’t do finger quotes, but she raised her hands around the word as though protecting an invisible crystal.

‘When the person who accepts it doesn’t know that it comes from something stolen!’ It was obvious to me.

‘In Italy we always know that at some point, something was stolen.’ she’d replied, as a perfectly groomed eyebrow disappeared under her fringe. ‘Stealing is human nature. It’s part of the economy.’

It was one of the more morally ambiguous lessons from my Italian experience.

When my time in Bologna came to an end, I was using ‘Eva’, the bike I bought to replace ‘Isabel’, (vanished while I was at the cinema watching ‘The Science of Sleep’). On the day I left, I loaded her up with a single suitcase balanced on the saddle. I wheeled her right on to the platform, and left her there.

As I made my way down the train with my suitcase, I nearly laughed aloud as I wondered how long it would take for ‘Eva’ to find a new owner.

When the train starting moving I thought about the way it had felt to coast down the hill through the Porta San Mammolo when the traffic was quiet at lunch time, or the way I’d stand outside the bar in Piazza San Francesco, drinking wine and balancing on the seat, hours after I should have pedalled off. How safe I’d felt on those nights, once I did start sailing home through the dark streets, too fast, (I thought) for any potential predators.

Objects are transient, but memories are much harder to shake. A swarm of commuters covered the platform and I lost sight of ‘Evita’, mine no longer, already released back into Bologna’s bicycle black market.

On this side of the world it’s autumn and I’ve just finished a day’s work at an art gallery here in Daylesford. I step out into the crisp evening, unlock my bike from a signpost, no trailer today. Then I jump up on the seat and fly down the hill to Hepburn Springs.

It would be strange if my new bike were stolen while I work. It certainly cost more than 15 euros, and Daylesford is no Bologna. But apart from that state of constant paranoia (which my memory has somehow made charming), and despite the little cheer-squad that I tow along behind me, using a bike to get around feels just the same now as it did ten years ago.

I plan to spend my thirties riding my new bike. But I haven’t given it a name, and I don’t think I will.