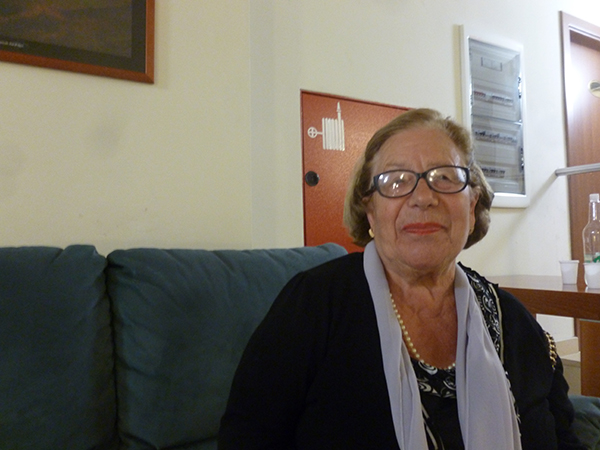 She misses Australia deeply after 52 years of life in Italy

What catches my attention the moment Signora Vincenzina Marsicovetere and I sit down to chat is her accent. It is distinctly northern Italian. Although born and raised in Viggiano, Signora Marsicovetere has lost all her native dialect as a consequence of years living with her husband’s family who were from the Trieste region.

Listening to her as we sit in the Hotel Dell’Arpa in Viggiano, surrounded by the very voices that resonated with the local dialect, it is incongruous to hear the lilt in her speech and the constant referencing of self with “mi” rather than “io”.

As an instance, when I ask her to tell me when she arrived in Australia, Signora Marsicovetere answers, “Mi son arrivata a Melbourne il 24 Giugno del 59,” (I arrived in Melbourne on July 24th 1959) and goes on to add, “Mi son andata per ragione di lavoro. Mi cugina mi ha fatto il richiamo.” (I went in search of work. My cousin sponsored me out.)

What makes her phrasing so interesting is that it is so unexpected. It takes me completely by surprise, as does her candour in telling me her story.

“Mi ho fatto sei anni in Australia, dal 1959 al 1965,” she explains. “Avevo mi cugina lì a Melbourne da gia alcuni anni. Lei mi scriveva sempre, ‘Vieni. Vieni. C`è lavoro, ma purtroppo non era così facile. Era duro trovare lavoro, anche per qualcuno che aveva famiglia gia lì. Mi ho impiegato tre mesi prima che tramite un’amica ho riuscito a trovare lavoro. Ed anche questo non ha durato a lungo. In quel tempo i padroni ti tenevano alcune settimane, forse un mese e poi ‘Sorry, no job for you’. Era una cosa brutta.”(I spent six years in Australia, from 1959 to 1965. I had a cousin in Melbourne at that time. She would always write and tell me, ‘Come. Come. There’s work.’ Unfortunately this wasn’t the case. It was difficult to find employment, even for someone who had family there. It took me three months to secure work through a friend. Even this didn’t last long. At the time many employers kept you on for a few weeks, perhaps a month, and then told you there was no work for you. It was a terrible situation’)

“E poi la casa dove mi abitavo con mia cugina e sua famiglia era a Carlton, ma era una casa vecchia e in bisogno di essere buttata a terra,” she recounts, and one can hear the scorn in her voice, the memory still raw in her mind. “Abbiamo dovuto affitarci due camere in un altro luogo, Fitzroy, non tanto lontano da Carlton, e pian piano mi son abituata all’ambiente in Australia. Si lavorava, si metteva moneta da parte e ci riunivamo con paesani quando era il weekend.’ (On top of all this the house we lived in with my cousin and her family in Carlton was in a state of disrepair and conceivably in need to be torn down...we had to rent a two-room accommodation in nearby Fitzroy, and gradually I got accustomed to the way of life in Australia. One worked, saved, and spent weekends with fellow Italians.)

Despite the initial hardships of not having the language, Signora Marsicovetere assures me she came to like the little of Australia that she slowly got to know, in particular the Australians themselves whom she stressed treated her well. And it was in Australia that she met and married Albino, and together they set about making their own home in Balwyn.

“Albino era in Australia dal 1955, e lavorava per il Tramsway Board,” she  explains. “E mi lavoravo a Balwyn,” (Albino had been in Australia since 1955, and worked for the Tramsway Board. I worked in Balwyn) though she doesn’t tell me what exactly her work was, adding instead that one of the great challenges she and her husband faced was the fact that they couldn’t afford the unexpected medical expenses that came their way. When I press the subject she pauses contemplatively then whispers, “Non c’era Medicare in quei anni. Mi son trovata incinta con tante spese di medici e ospedali...e mi morì prima di nascere.”(There was no Medicare back then. I soon found myself pregnant and we had to meet so many medical expenses, and then I suffered a miscarriage.)

The sadness in Signora Marsicovetere’s voice is palpable and more so when she tells me that this wasn’t her only miscarriage.

It was the turning point in her late husband’s dalliance with Australia as the place to secure their future. That and the fact that his mother never ceased to write to him that he belonged back in Italy, with his parents.

As it transpired Albino couldn’t resist the lure back to his homeland, and in a move that surprised his then still youthful bride, he booked their return passage to Italy without consulting her.

“Siamo andati a vivere con sua famiglia nell’Alto Italia,” Signora Marsicovetere explains. “Dopo dieci anni in Australia mi son trovata di nuovo in Italia, ma i famigliari di mio marito non parlavano l’italiano. Avevano un dialetto loro, piuttosto slavo. Si sentivano più austriaci che italiani. Per mi era molto difficile. Meglio in Australia. Da mi marito io ero una straniera, peggio che in Australia. Ero meridionale. Non mi trovavo. Almeno in Australia non c’era questo senso di essere meredionale. Eravamo italiani.” She pauses briefly then adds, “Piangevo sempre. Per mi era cattivo tempo.” (We went to live with my husband’s family in northern Italy. After ten years in Australia I was once again in Italy, and my husband’s family didn’t speak Italian. They had their own dialect that sounded Slavic to my ears. They saw themselves as Austrian rather than Italian. I found this all very unsettling. To my in-laws I was a foreigner. It was worst than when I was in Australia. I was a Southerner. I didn’t fit in. In Australia at least there wasn’t this aspect of being a Southerner. We were Italians.)...I cried incessantly. It was a very bad time for me.)

Signora Marsicovetere is enthusiastic about Australia’s innate beauty and all these years on, she continues to harbour a pang of affection for the country she never wanted to leave. Ironically enough, and perhaps somewhat sadly, in the same breath she bemoans the fact that after years of living in northern Italy she returned to Viggiano only to find that she was estranged from the kind of life that was and continues to be lived there.

“Non conosci più le persone,’”she reflects. “Non si parla più il dialeto. In un certo senso è cambiato tutto. In un altro non è cambiato niente in questi paesi.” (You don’t know anyone any longer. The dialect is no longer spoken. In many respects so much has changed and so much has remained the same in all these small towns.)

Does la signora still feel an affinity for Australia? Yes, of course, she smiles.

“Sento una nostalgia profonda per quella terra,” she says as we stand to farewell one another, adding, “Grazie, non è spesso che ne parlo, forse mai.” (I still miss Australia a lot...Thank you, it’s not often that I talk about it, perhaps never.)