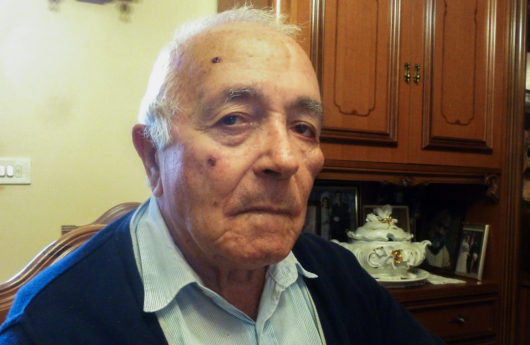 Fond memories of a toilsome, yet rewarding experience of an Italian migrant

Angelo Savino was 31 years old when he decided to follow his sister to Australia. After a ten-year absence and during her brief visit back to Italy she had been one of the very first in the Post-war era to take advantage of the call for migrants. Having made a life in her adopted country, she felt Australia and its opportunities would also appeal to her brother and his young family.

“Parlando con mia sorella mi sono convinto, e nel 1962 sono partito, lasciando mia moglie e due bambini di 4 e 2 anni qui in Italia” (In 1962 speaking about Australia with my sister I was convinced, and I left, leaving behind my wife and children aged 4 and 2). He nods as we sit and share a few moments of what is still a very significant part of this 83-year-old man’s life journey. “Ho fatto 28 giorni di nave partendo da Napoli. Dura questa partenza, solo, senza mia moglie, senza i miei figli. Anche se c’erano degli amici, non fu un viaggio privo di dubbi e malinconia”. (I spent 28 days at sea, having left from Naples. It was a difficult parting. I was alone, without my wife and children. Even though there were friends, it was still a voyage filled with doubt and sadness).

Angelo Savino, a native of Marsicovetere, has fond memories of Australia, particularly the manner of the Christmas celebrations and the orderliness of the official institutions where people respected authority and the need to wait one’s rightful turn. “La gente australiana era generalmente molto gentile verso noi stranieri. Non ho avuto grandi problemi, a parte la lingua che non era semplice. Infatti, lavorando nelle fabbriche ho imparato il calabrese più che l‘inglese”. (Australians were overall quite friendly towards us strangers. I didn’t have any great problems, apart from the language, which was difficult. In the many factories where I worked, I actually learned more Calabrian than English).

Angelo gives a hearty laugh at the memory of working at the Ford factory and then at a tannery in Footscray, where he earned what he termed a good income because he did a great deal of overtime, working laborious jobs many others refused to undertake.

What he didn’t like was the manner in which migrants, and in his particular experience, Italian migrants, were given work that non-migrants either didn’t want to do because it was often backbreaking, or felt beneath them to do.

“Sono andato in Australia per migliorare la situazione finanziaria della mia familglia” he tells me. “Lo scopo era di mettere soldi da parte, una cosa non possibile nell’Italia di quel tempo. Volevo caso mai richiamare la famiglia in Australia, essere insieme di nuovo. Non è una cosa bella essere separato dalla famiglia, anche se avevo mia sorella e la sua famiglia. I miei erano lontani. Ero solo”. (I went to Australia in order to better my family’s economic situation. The aim was to put money aside, something not possible at that time in Italy. I wanted to call my family out to Australia, to be reunited. It was not a pleasant thing to be separated from one’s family, even if I did have my sister and her family. My family was far away, I was alone).

Initially residing with his sister in one of Melbourne’s inner city suburbs, Brunswick, a suburb which was then filled with Italian migrants just like him, and where it was possible to mingle with likeminded people who had come to Australia in similar circumstances and therefore understood the state of mind of a newly arrived resident. His sister’s move to outer Pascoe Vale made his life difficult – particularly his commute to work.

“Pascoe Vale era un bel posto” he reminisces, “ma per uno come me che aveva bisogno dei mezzi per andare a lavoro era scomodo. Allora me ne sono andato ad abitare a North Fitzroy, vicino la Chiesa Di Santa Maria, lì a Nicholson Street”. (Pascoe Vale was a lovely spot, but for someone like me who needed public transport to get to work it was inconvenient. So I went to live in North Fitzroy, close by the Church of Our Lady – Help Of Christians – in Nicholson Street)

His mind is sharp and Angelo describes the church for me in detail, asking if it is as he remembers it. I am pleased to tell him it is and he smiles with satisfaction at this obviously vivid recollection.

“Ho lavorato più di tre anni come cementista” he says and his tone darkens slightly. “Lavoro pesante. Pesante. Lavoro che tanti australiani non volevano fare. Infatti tanti di loro facevano una giornata e basta. Lavoro molto duro. Ma non avevamo scelta. Noi immigranti dovevamo lavorare ad ogni costo” (I was a concrete layer for more than three years. Hard work. Very hard. A kind of work many Australians didn’t want to do. In fact, many of them lasted just one day and then they had had enough. But we had no choice. We migrants had to work).

We are sitting across the kitchen table on his farm, sharing a coffee, and Angelo Savino frequently breaks off his conversation to gaze around. I ask him if he has any regrets and he looks at me right in the eyes as he answers.

“Ho portato buona moneta in Italia. Mi sono sistemato. Però mi sembra che uno sta meglio dove è nato”. (I took good money back to Italy. I set myself and my family up. However, it seems to me, that one is better off in one’s native country).

Therefore, it was that after some six years in Australia, Angelo Savino decided that despite all the positives of his experience in Melbourne, his heart and mind were constantly drawn back to Italy, and to his young family whom he missed intensely. It was a return journey he made via Argentina, where he spent a mere two days with a brother who had migrated there, but with no intention whatsoever of even considering putting roots there himself after his economically successful but personally challenging time in Australia.