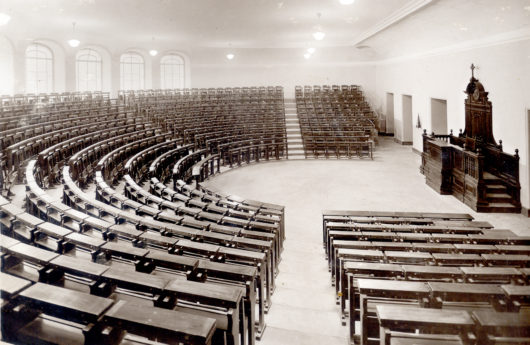 An eighteenth century amphitheatre and marbles of dead poets: the stage of an Italian examination

I will always remember my first exam at an Italian university. I had barely been seven months in Italy. I had arrived on a scholarship from the Italian government, enthusiastic and fresh-faced, just after graduating in Italian Studies at Melbourne University.

It was the 28th of May, a bright and windy spring day and the subject was “Letteratura italiana 1”, a cornerstone subject for the degree in “Lettere”, or Arts. The subject focused on early Italian literature ranging from the poetry of the Sicilian School to Petrarch.

The exam was entirely oral, consisting in an interrogation by a panel of academics, much like a serious job interview. It was also the only form of assessment for an entire subject. The exam mark was out of 30. An 18 was a pass. The difference between a high and a low mark rested on whether an examinee, or a ‘candidate’ could elaborate a complex, articulated response that showed a firm recollection, some understanding and an ability to connect the themes informing the subject.

The exam was in two parts: the first was a general overview of Italian Medieval literature, covering all the known poets, from the minor to the major, from those writing in Tuscan, to those writing in other dialects. This part of the course was mostly based on a single anthology, an encyclopaedia of authors, ordered according to their region of origin and chronology. I would have to memorise each entry and, if possible, at least some excerpts of their work. The second part of the examination was the specialised or ‘monographic’ part. This was based on a single article by an English scholar, written in Italian, on the different extant versions of Petrarch’s most well known work: his collection of Tuscan poems called Il Canzoniere. This too was to be memorised. Class attendance was optional, and indeed, considered a waste of time by many students. It was better to concentrate one’s efforts on memorising, most suitably in extended sessions with another student, where each would take it in turns to read aloud, underlining the textbook as he or she went, and then from memory repeating orally to the other student, who would have the textbook in front of them, checking the accuracy of the recitation. For months I had prepared, sharing my time and a textbook with another student who was almost at the end of her degree in Philosophy, and for whom this exam was one of the compulsory optional.

On the appointed day we took our seats in an eighteenth century lecture theatre, steep and semicircular with rungs in dark wood. Our fellow students, ranged along its curved rows, were separately murmuring to themselves, heads bowed over books whose scripts they had heavily underlined, coloured and annotated. From the theatre’s windows overlooking the internal courtyard of the university complex, I could see brooding marble statues standing silent and pale, monuments to dead poets, scientists and scholars.

In the pit of this theatre was a single table accommodating three people who sat facing the amphitheatre’s funnel that rose above them. These were the examiners: in the middle grey haired and distinguished was the “Professore”. On either side of him sat the Assistants, two women not much younger than he. On the other side of the table, with its back facing the amphitheatre, there was a single empty chair. This was reserved for the candidate whose mind, on its entry into the Elysian fields of knowledge, could only be admitted white robed and pure.

One by one an assistant would summon a candidate by calling out a name from a long list retrieved from a noticeboard where students had written their names, sometimes scratching or cancelling, and rewriting them, according to when they felt they would be ready to be examined. This could be on day one, two, three, or beyond, depending on the length of the list and the severity of the oral interrogation. Sometimes students would fill in their names where another name had been cancelled, inserting it above or below the dark mark, to bring forward their ‘moment of truth’.

When a name rang out, the candidate to whom it belonged would glide down past the semicircular rings, feet barely making the wooden steps creak, despite the weight of the facts crammed into their brain, down past each rung into the pit. A soul aspiring to the laurel leafed crown of salvation must first pass through Hell.

At the appointed hour, my name was called and I descended the creaking steps. My memory was blank and I was in shock. How would I be able to navigate the hundreds of pages, verses and dozens of poets whose names dotted the Ptolemaic constellations of Italy’s medieval firmament, some shining brightly, some a little, and some barely at all?

How I did it or did not, is another story. However, one thing was for sure, my success would depend on performance, on being able to take the stage without failing my lines, and to dance enough between them to enthral and entrance my audience.

As everywhere, but perhaps even more so in Italy, theatre is the true metaphor of life. 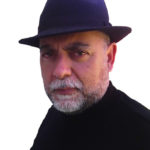 Gerardo Papalia
Dr. Gerardo Papalia is a Senior Lecturer at La Trobe University in Melbourne. He has completed degrees in Italy and Australia and has taught in universities in both countries. He is a specialist in the study of the history and culture of the Italian diaspora in Australia which he analyses through post-structuralist theoretical approaches. His publications cover a wide range of disciplines including history, cinematography, religious belief, literature and cultural hybridity.
Follow this author
previous post
stay with us