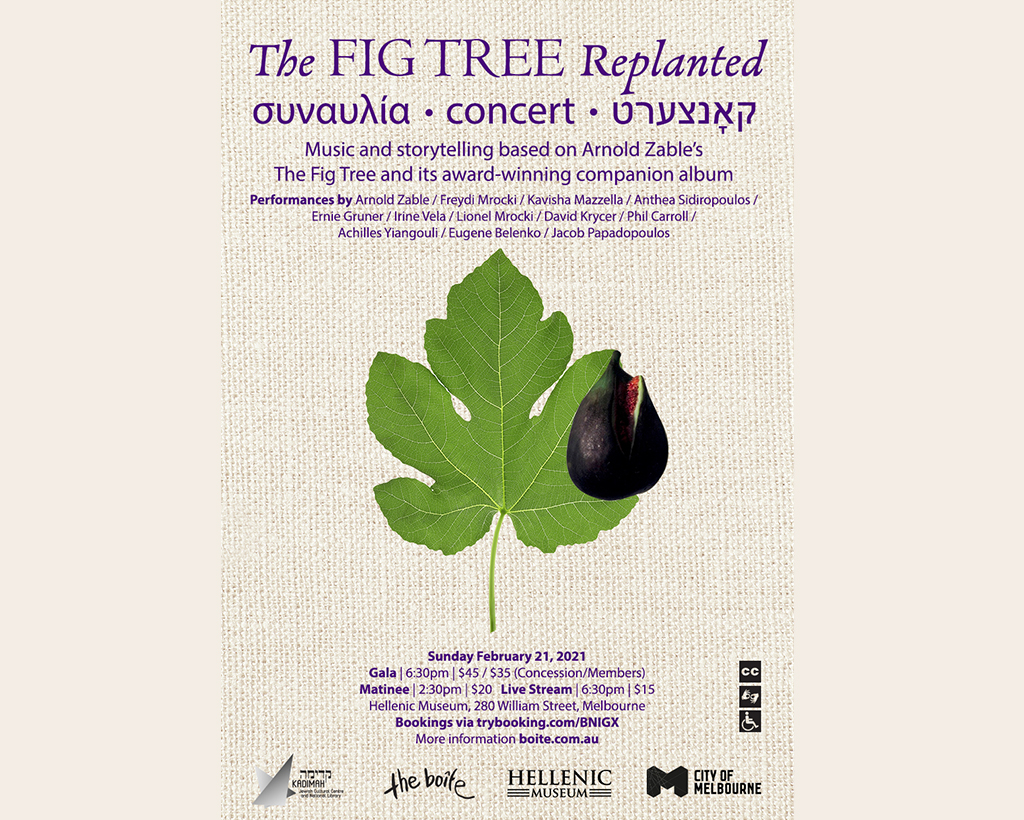 An Interview with Author Arnold Zable

First published in 2002, the book The Fig Tree by Melbourne-based author Arnold Zable gave a poetic and empathetic voice to the migrant experience, to the love of family, the search for belonging, and longing for home. The book of short stories was followed by a series of concerts by the same name which grew to be one of The Boite’s most successful artistic productions in its 40-year history.

On the 21st of February 2021 The Hellenic Museum is hosting The Fig Tree Replanted, a rendition of this storytelling concert, celebrating the rich multicultural tapestry of Australia’s collective identity and providing an evocative demonstration of how the arts foster cross-cultural connection and collaboration.

Though centred largely around Zable’s Jewish background and his wife Dora’s Greek background, the production also has strong Italian themes that come through in ARIA award-winner Kavisha Mazzella’s original song Wedding Sheets about a proxy bride (sposa procura) journeying from post-war Napoli to Australia, as well as her rendering of Vulumbrella, a Neapolitan serenade from the 1400s making reference to the ripe fig.

I had the pleasure of chatting with Arnold Zable about the process of bringing these stories to life on the stage.

First of all, what attracted you to the idea of putting your book onto the stage originally?
‍

Well, after the book came out in 2002, I realised that a lot of the stories were associated with songs as well. I kept hearing songs especially from Greek,Jewish and Italian immigrant backgrounds and so I thought maybe I’d make a companion CD with The Boite world music organisation who loved the idea. It then went on an unexpected journey, ending up at the National Folk Festival in Canberra in 2004 where it won the ScreenSound Australia National Folk Recording Award. So the book came first, then came the CD, then came a series of concerts and it just kept evolving from there.

What was your motivation for creating the second edition of concerts, The Fig Tree Replanted?
‍

All of the underlying themes of the book are ever-recurring; the search for belonging, the search for a new homeland, the attempt to make sense of one’s own ancestry, and of what we hand over to the next generation, to my own child Alexander.
And now you have new generations of immigrants and refugees on the move. We are living in a time when the number of displaced persons worldwide is higher than ever, over 70 million, and I have personally been involved with asylum seekers and refugees for the past two decades. So the idea began, I thought perhaps we could replant the fig tree!
‍

On top of that, I’m excited by the collaboration with The Boite, The Hellenic Museum and the Kadimah Jewish Cultural Centre, and the fact that the production will draw new audiences and keep the conversation going.

As a successful writer of novels, short stories and memoirs on the one hand, and live performance and storytelling on the other hand, what are the challenges distinct to each medium for you and what are the strongest similarities?

‍
The two mediums do overlap but there are interesting differences. The major difference is that once the story is down on the page that’s it, it’s done, whereas in live performance it’s living and there’s always the unexpected. There is also the challenge of being there in front of the audience, engaging them and taking them with you. When you write your own books you’re the author, you take responsibility for better or worse but when you’re on the stage you’ve got a responsibility to the people around you, both those on stage with you and those in the audience. It’s a collaboration.

In The Fig Tree Replanted I’ve rewritten the script a little more tightly than I used to do it in that particular performance so that every song tells a story of a journey. There are some new stories that have come my way since then as well as a fresh approach to some of the older stories. With TheFig Tree it was part concert and introduction to songs and part script whereas now with The Fig Tree Replanted we’re aiming for a kind of flow between story and song and in doing that I’m writing for the ear. I’m writing to take people into the worlds of the songs and into the worlds of other people’s lives, the lives of people who sought that undertaking, that journey towards finding new life.


You’ve previously referred to Australia as “a land of many melodies.” I just love that description, and you have some incredible musicians from Greek,Jewish, Italian and other backgrounds playing in this concert. What is your involvement with the musical side of the production?
‍

I’m intimately involved with the musical side. Each song has a story to tell and I worked with the musicians in terms of exploring the stories of the songs.
One of the songs Anytime the Wind can Change I co-wrote with Kavisha Mazzella way back in 2002 and it was performed in a play about refugees that I co-wrote Kan Yama Kan (meaning Once upon a time in Arabic).
There is another song with lyrics that were written by my father who was a Yiddish poet. I collaborated on it with musician David Krycer, we talked about the poem and he then interpreted it in a very extraordinary way, wrote the melody and turned it into a song.

The booklet in the CD tells the stories of the songs too, in a way that is very different to the book The Fig Tree. It tells different stories that are linked to the themes of the book, sometimes indirectly and sometimes very directly, as in the Greek Song of Songs, the Mauthausen Cantata, which is a story I tell in The Fig Tree book, so there are all kinds of ways in which we play around with the written word. It’s an exciting kind of cross-fertilisation between music and song on the one hand and story on the other.


The Fig Tree Replanted is such an important piece of art to be showing, in part because it’s as relevant today as it was nearly 20 years ago when the book came out, and in part because it showcases the richness and beauty of cross-cultural exchange and collaboration. What are your desired outcomes of this project in the sense of, what do you hope audiences take away from the performance?

‍
First of all, I hope they’re enchanted by us and by the experience of movement that takes them into another place with the magic of story and song flowing effortlessly from one to the other. I’m hoping they come with us on that journey. That’s the first obligation of the artist, is to use their craft to evoke many things in the listener but mainly to have them engaged and enchanted.
Then beyond that, of course, are the conversations that naturally flow from those stories; conversations about displacement and about the plight of refugees in this day and age. I weave in a couple of new stories that concern refugees that I’ve known who have been incarcerated on Manus Island, so I hope it leaves people reflecting on their plight and on their struggles. Above all, I hope it helps audiences to see that with just one shift in the wind we could be the refugee, we could be the person knocking on the door asking for refuge.

Firstly it’s that enchantment and enjoyment of the performance, secondly the conversations that flow from it, and thirdly a heightened sense of intimacy and compassion for the people who are making the journey now.


There will be two live performances of The Fig Tree Replanted on Sunday the 21st of February at 2:30pm and 6:30pm at the Hellenic Museum in Melbourne, as well as one live stream at 6:30pm.

Tickets can be purchased at http://trybooking.com/BNIGX