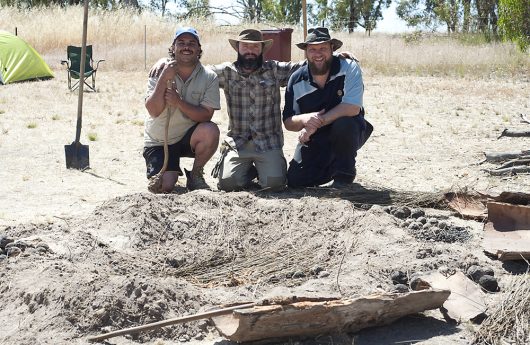 I would like to acknowledge the Jadawadjali and the Wotjobaluk peoples as Traditional Owners of the Wimmera region, and pay my respects to their Elders past and present, and the Elders from other communities of Victoria.

Maurizio Campanelli is an Italian researcher who specialises in prehistoric archaeology, and born in a small medieval town near Taranto in the region of Puglia. He graduated in classical languages and studies at the University of Bari, with a consequent specialisation in archeology, attained with a master by coursework. After several years of field work at archaeological sites in Europe, in 2012 he decided to relocate to Melbourne.

But what is an Italian archaeologist doing in Australia? This is the question that prompted me to meet with him and write this article.

He came to Melbourne to follow his partner, who started a PhD in archaeology with a focus on archaeological sciences. At the time, he had no idea that he would have the opportunity to further his studies, until he participated as volunteer at the archaeological excavation at the old Carlton United Brewery site, northwest of Melbourne CBD. Run by La Trobe University, the excavation aimed to unveil evidence of Melbourne’s early history.

Maurizio’s desire to undertake a PhD course was prompted by this first approach to Australian archaeology and the friendly high standard academic environment he encountered. This was made possible through a Postgraduate Research Scholarship by La Trobe University in 2014.

The topic of his current research is a study of the last 11,000 years of human occupation in central western Victoria; an area traditionally belonged to the Jadawadjali people.

“In Australian Indigenous archaeology is not easy to predict what you will be uncovering, where and how old it is,” Maurizio explains, when asking him about his expectations while digging in Victoria. An archaeologist however, has high chances to run into surprising revelations, bringing to light what has been long buried under soil and dust. This is exactly what happened in 2015, when he was allowed to conduct a field investigation in collaboration with the Barengi Gadjin Land Council Aboriginal Corporation.

From the preliminary results, the collaboration developed into a project of experimental archaeology consisting in the re-creation of an Aboriginal earth oven with “clay balls”, traditionally used to cook vegetable foods in wetter environments. Originally excavated at a swamp area near Clear Lake, the earth oven was re-constructed on the southern bank of the Wimmera River near Horsham. It consists of an earthen fire pit filled with lumps of clay that act as heat retainers when the pit is layered with foods and sealed. It may be considered a slow-cooking method or “moist baking” as Maurizio suggests.

Re-construction apart, the experimental procedure has involved the cooking of Murnong (also known as Yam Daisy), a tuber traditionally recognised as a staple food for the Aboriginal peoples of Victoria. Nearly brought to extinction by European settlement and early pastoral development, the tubers have been donated by an amateur grower from the Geelong suburb of Corio. More importantly, Aboriginal communities are striving to reintroduce them as part of their cultural and alimentary practices.

Maurizio’s contribution has been important for the success of this experimental revival which restores a “broken tradition”. Starting in October 2015, the Barengi Gadjin Land Council is keen to make this ancient culinary practice an annual event celebrating the Aboriginal connection to the Country.

The common aim of an archaeologist is to record, interpret and preserve ancient material remains for future generations. The Indigenous cultures of Australia are the oldest continuous living cultures on earth, it follows that Indigenous archaeology can be rightly considered a social science with the potential of supporting Aboriginal self-determination. Experimental archaeology, among many other possibilities, shall serve as a tool to recover and revive intangible heritage.

Keen to complete his PhD degree despite living on a budget, Maurizio is driven by passion and gratitude, and makes it a public utility, no matter the dust and the difficulties he may be rolling into.