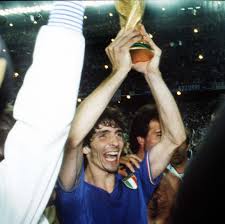 Paolo Rossi: from dreamer to champion

PAOLO ROSSI - Dreams Create the Future" is a 90 min feature documentary tracing the fascinating parable of Paolo Rossi's life story, from being impoverished to achieving his greatest dream: becoming a World Champion.

One of the very first memories of my early childhood is the scream from my mother and her friend at Paolo Rossi's goal and the victory of Italy in the World Cup of 1982. We watched the game on TV, and that scream still resonates in my head.

Paolo Rossi – un campione è un sognatore che non si arrende mai (Paolo Rossi: A Champion is a Dreamer who never Gives Up) is a film that speaks straight to the heart. Gianluca Fellini, in his feature film directorial debut, along with the award-winning Michela Scolari, masterfully transports us all (even those who do not dabble in soccer at all) into the private world of Paolo Rossi and into the world of football itself.

Fellini tells us the story through the eyes of Paolo (who came to be affectionally known as Pablito), in a close-up which dives into his soul. Pablito tells us his story from where it all started: on a public square of Santa Lucia, a suburb of Prato where he played as a young boy. In the middle of the square, and even sometimes in the middle of streets, Pablito and his friends would lay down rocks or T-shirts as goals posts. The rest is history.

To support Pablito’s story, there are not only images of a glorious past but also authentic and genuine testimonies. Fellini presents us an impressive gallery of some of the biggest protagonists of the so-called Golden Age of football: Rummenigge, Platini, Tardelli, Baggio, Antognoni ,Falcao—each of whom shares their Pablito story.  In fact, the legendary Pelé  and Maradona both speak of Pablito as one the best players of all time.

Recounting the events of his incrediblecareer, Pablito guides us through what seems to be a true fairytale of courageand resilience, from some dark days to his legendary phoenix-like rebirth,ultimately taking the world by surprise winning both the World Championship andthe Ballon D’Or in 1982.

In the documentary, we hear Pablito’s warm voice as he reminiscences about his first source of inspiration, Kurt Hamrin (known as l’uccellino – the little bird ), a legend who played a crucial role in teams such as Milan, Sweden and, of course, Fiorentina (his favourite team). Pablito’s dad would take him to watch Fiorentina at the Artemio Franchi’s Stadium. At that very stadium, Pablito would closely watch his hero style of play. Ironically enough, l’uccellino turned out to be a great fan of Pablito himself and was honoured to participate in the documentary.

Half-way through Pablito’s chronicles, I was moved to learn of the truly special bond he had with his coach, Bearzot, who became, for him and his teammates, a fatherly figure.

The short but rich career of Paolo Rossi is told against a backdrop of the social and political issues that challenged Italy at the time.  It was a time when the entire social fabric of Italy was changing. In that era, during the so-called anni di piombo (years of lead) of terrorist bombings and massacres, political issues and financial hardship characterised the country. However, it was a time when football evolved into the lucrative billion-dollar business it is today.

The victory of the 1982 World Championship did not represent merely a sporting achievement, rather, a watershed moment, for both Italy and Pablito, who after his umpteenth setback, managed to get back on his feet stronger than ever. As Pablito rises from his own despair and troubles, so does the Italian nation, awakening from the bloody torpor of the years of lead.

Through his hardships, his ups and downs, we come to learn about Pablito. In front of the camera, he proves to be  a true poet, contemplative, almost a philosopher of life and football. A sensitive man whose only loyalty was to football, he admits becoming emotional while listening to the national an them when taking his place on the Italian team. Pablito would in fact come to describe himself as ‘extremely Italian’.

This documentary is a loop, a circle, like life itself. It ends where it all began, with Pablito returning to the streets where he played as a child. It reminds us that every child is a dreamer. For Pablito ,that child was wrapped up in a simple time in which a game is still just a game.

Paolo Rossi is a timeless icon. An epitome of a great football player, the quintessence of football. Paolo Rossi is football—the kind of football that no longer exists, a sport that, as Paolo reminds us, is made up of 11friends who play against 11 friends.