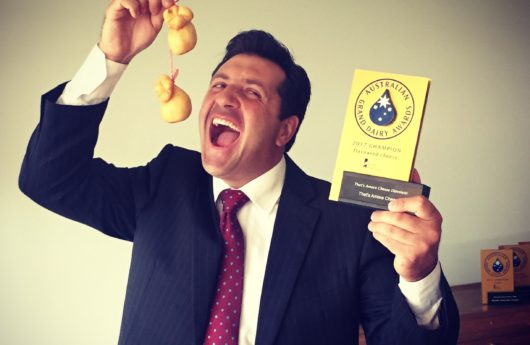 That’s Amore Cheese Diavoletti has been crowned Champion Flavoured Cheese at the Australian Grand Dairy Awards, the Grand Final of dairy competitions in the country.

The Australian Grand Dairy Awards are the industry’s most prestigious and highly-regarded accolade, established to recognize excellence and quality in the Dairy Industry.

This year Flavoured Cheese Champion Diavoletti it is a very unique and special product. The name translates in “little devils” and it is a small provolina shaped smoked cheese with a single chilli stuffed olive at its centre. The balance of the mild cheese, with the salty olive and a kick of chilli makes for a wonderfully unexpected taste sensation.

“What a great honor for our Diavoletti to be crowned Champion Flavoured Cheese for the second time at the Australian Grand Dairy Awards! It is the Industry’s most prestigious competition, and we are over the moon that our dedication in producing the very best quality product has been recognised again.” Says the owner, Giorgio Linguanti.

In 2004 Giorgio arrived on the shores of Port Phillip Bay without a word of English. When he migrated to Melbourne he got a job in a cheese factory where his interest and passion for making cheese ignited. After this experience, in 2008 Giorgio started his own business ‘That’s Amore Cheese’, initially producing just one product – the bocconcini leaf.

Giorgio’s business grew rapidly and now after 8 years he moved into a bigger factory in Thomastown where they process 5 million liters of milk per year to make cheese. That’s Amore Cheese supplies top restaurants and selected Delis with six vans delivering freshly made cheese every day in Melbourne. The company also distributes Australia wide and is currently exporting to Singapore, Hong Kong, Bali, South Korea and registering to export to other market destinations.