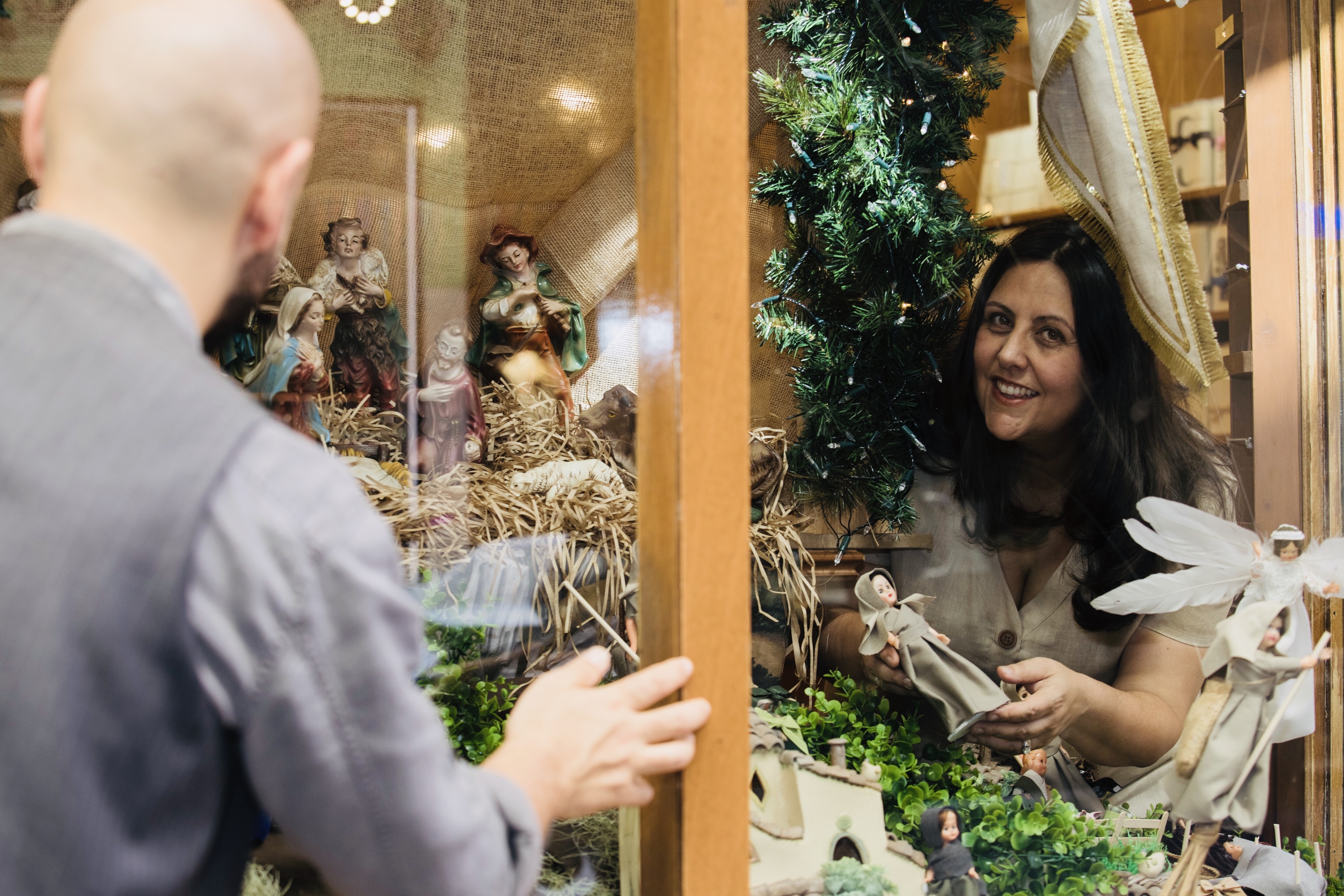 ‘After being locked down for so long and seeing the city lose its vibrancy, I wanted to create something beautiful to welcome Melburnians back to Degraves Street,’ says Romina Beltrame, of Melbourne's Il Papiro.

Create something she did, with the help of Anthony Montesano, Couture Artist and Owner of Signor Mont.

Tucked away in one of Melbourne’s most iconic laneways is something truly special. The meeting of these two artisanal minds conceived a Christmas window, but it’s unlike anything you’ve ever seen before.Moss green, pastel hues and earthy tones envelope you, drawing you into the intricate world Romina and Anthony have created. Living within the layered pockets of the window are scenes depicting the story of the Befana – the Christmas witch. The story, which bridges religion and folklore, calls upon the imagination of young and old to believe in magic at Christmastime.

The window brings together elements of both their lives; Romina’s presepio and stable scenery, the Buon Natale banner hand stitched by Anthony and his aunt, not to mention the collection of vintage Italian dolls sourced from across Australia, who each now wear matching Signor Mont original costumes. ‘We thought of the things we had in common,’ Anthony says, explaining how they approached the project. ‘It had to be, 1- Italian, 2- it had to have some artisanal, or hand-made elements, 3- it had to be something very classic, 4- with the storytelling, it had to be interactive, it had to draw people in somehow.’ Romina smiles, adding, ‘It had to be più grande di noi. Bigger than just Il Papiro. Bigger than Signor Mont. Something greater than that. It’s a point of pride, a point of celebration of our culture.’

‘Christmas has become very westernised,’ Anthony muses. ‘That’s the thing about telling the Befana story; It’s very unapologetically Italian, it’s very unapologetically Catholic. Young Italians and the next generations might not be Catholic, necessarily, but we can all appreciate that culture and storytelling. That’s timeless. That’s above religion, and anything else. That’s cultural.’ Romina explains how since the window’s unveiling, she’s watched countless people stand and marvel at their creation.She shares a few anecdotes of comments heard and scenes witnessed, being reminded that their work has educational merit beyond its aesthetic value.

Romina and Anthony bounce off each other with ease.Sharing the same creative and cultural values has set this pair in good stead for future collaborations. From the initial idea to completed display, the pair has worked tirelessly for weeks to bring Melbourne a culturally-significant artisanal masterpiece. Timely, many would suggest, is their choice to launch a creative venture at such a juncture in Melbourne’s current state. ‘If this year has taught us anything, the one thing we’ve missed is the sense of community and connectedness, and we wanted to rebuild that community element. This is a chance to come back together, and now that it’s set-up at Il Papiro until the 7th of January, it’s a place where people can congregate,’ Anthony says. ‘Our window provides a bit of escapism from what’s been happening this year. It allows people to dream again.’ As we are unable to travel at the moment, they invite everyone to come along and be transported to Italy with the masterpiece they’ve gifted to Melbourne this Christmas.

Romina, reflecting on her time as a small-business owner during COVID closures in Melbourne, calls this her Rinascimento, her Renaissance, a renewal of passion, drawing her back to 2002 when she first opened Il Papiro’s doors. Her care and attention to detail extend beyond the buttery soft leather-bound journals and textured writing cards on Il Papiro’s shelves. Her drive is one of integrity and tradition, shared and demonstrated equally by Anthony. It’s no wonder they were destined to join forces to help bring Melburnians out of their COVID slump.

Il Papiro and Signor Mont. The collaboration we never knew we needed.

Bring your children to experience the story of La Befana and you might just get a glimpse of her!

She is visiting IL PAPIRO - 10 Degraves Street, Melbourne, on Saturday 19th December, between 10am - 12pm.