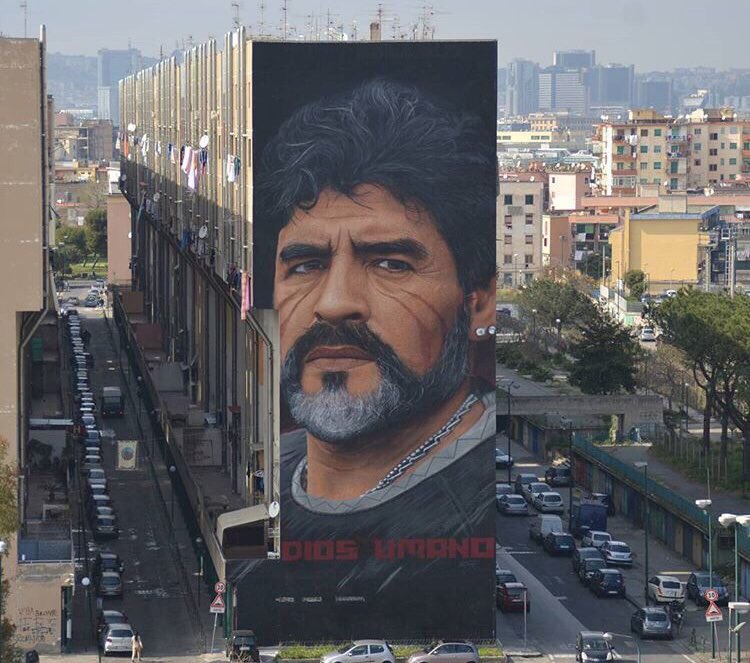 Multi-award-winning British filmmaker Asaf Kapadia’s eye-opening new documentary on Argentinian soccer legend Diego Maradona draws a fascinating connection between Maradona and the city of Naples. Therewith a symbolic connection is also drawn between Argentina and Italy at large, but the interaction between the two is complex and fraught with challenges and is soon taken into a political realm ̶ sports a subject triggering a heavy socio-political discourse. (Photo Naples, Italy: Diego Maradona by Jorit Agoch)

The documentary stands firm in the belief that ‘Life is not what we do, it is about how we do it’. Chartering Diego Armando Maradona’s life and career, the film moves from one event and high (and low) light to another, gaining speed as we get to know the footballer both as a man with many needs, and a legend, untouchable, unbeatable, a national and international hero (and, granted, anti-hero). Kapadia does not judge or take sides but skilfully and respectfully separates Diego from Maradona, an ‘invented personality’, clearly explaining the difference between the two while ultimately establishing that Maradona in the midst of a career that became larger than life, had to at least temporarily abandon Diego, the man, so as to cope with the pressure, the media hype, the multitudes of fans in Naples and worldwide, and perform at his best. Better than the rest.

Full of parallels, comparisons and contrasts, this ambitious 130-minute documentary that captivates and engages from beginning to end presents us with Diego, the man, and Maradona, the legend. In the screened portrayal of the man flashbacks transport us to the squalid streets of shantytown Villa Fiorito in the Lomas de Zamora district in the province of Buenos Aires, where Diego Maradona grew up in a family of seven siblings and to doting parents, particularly mother Dalma Salvadora ‘Doña Tota’ Franco Cariolichi (1930-2011) with whom the footballer enjoyed a very close relationship (an article in Spanish declares that she had given birth to the most transcendent player in the world of football).

And beyond, even detached from, ‘the man’: as a legend in the making Maradona was brought into the Napoli team at a stagnant moment in his career and at a time when the collective performance of the Napoli players also left much to be desired. The film documents Maradona’s remarkable ability to transform this uneven team, taking it to unprecedented heights, with the Argentinian player himself intelligently, skilfully and urgently changing his on-field technique to tackle and ultimately beat ruthless opponents recurring to foul play in their chase for victory. Maradona has proven to us that football is, above all, a mind game: ‘Fútbol es el juego del engaño’.

After a powerful opening where the viewer is taken on a breakneck car ride that resembles more of a chase through the windy streets of Naples in July, 1984, and which brings to mind Ventura Pons’ speedy portrayal of the urban space of Barcelona, in Amor idiota (2004), Kapadia’s documentary takes the viewer into the middle of a press conference as Maradona first entered Naples upon being bought by the Napoli team and S.S.C. Napoli president Corrado Ferlaino. The scene is intense: a chaotic and packed room, media photographers flashing away, Maradona and team hounded by inquisitive reporters, an insolent journalist stressing the close connection between Naples and the Camorra. And all the while the video clip makes us almost viscerally aware of the external crowd waiting in anticipation in the stadium above. Maradona is greeted with roars of ecstasy as he enters the stadium to play his very first game for the Napoli team. After a number of documented initial setbacks Maradona finally breaks through and that is the beginning of a star career for the player and S.S.C. Napoli. When asked about his role in soccer history, about his predecessors and about what the future might hold, Maradona, not yet mastering the Italian language, spontaneously responded, in a recorded press interview clip, ‘Yo quiero ser simplemente Maradona, ni mi sucesor, ni Pelé” (the acrimonious relationship between Maradona and Pelé is well documented by a hungry media but it does serve the parallel purpose of boosting public viewers’ ratings for both celebrities). Among the people of Naples, Maradona was revered as a semi-God; his picture often featuring next to the Catholic crucifix in homes where the player supposedly embodied almost Christ-like attributes. Maradona himself entered an almost mystical realm on the pitch, which may have explained his almost otherworldly ability to perform in a league of his own. As he once declared, ‘when you are on the pitch life goes away, problems go away, everything goes away’.

Kapadia’s explosive documentary, which contains footage and video clips from the most crucial games in Maradona’s meteoric career and explores the footballer’s Italian connection in depth, captivates both cinematographically and narratively. The filmmaker takes us on a rocky ride through a personal life that soon became public, his visual narrative both juxtaposing and blending press shots, public footage and video recordings of games that have gone to sports history, and personal videos and intimate photographs from the Maradona private family albums. Narratively, flashbacks and flashforwards make this a very dynamic, highly sensorial documentary but the screened life story is still surprisingly smooth to follow and there is logic behind the constant bombardment of images.

The ever-scrutinising, often biased media celebrated Maradona’s many achievements and successes but proved all the more ruthless as it sensationalistically reported the Argentine footballer’s almost unprecedented fall from grace through drug addiction, an unexpected fatherhood scandal, and the Italy team’s crushing defeat against Argentina on 3 July, 1990, on their very home turf. Played at the Stadio San Paolo, in this much debated match where Maradona represented Argentina, he was forced to compete against his former Napoli team members. The conflicted Italian masses went from loving and worshipping Maradona to rejecting him in horror and disgust. While it is true that he went from rags to riches, Maradona ultimately ‘lost by knockout’, the ensuing media torture after the 1990 turn of events a setback that affects him to this day, severely testing his resilience. With regard to Maradona’s many drug scandals, a 1994 New York Times article by Rob Hughes comes down hard on the player, arguing that: ‘When Maradona fled drug charges and a paternity suit in Naples, Menem [former president of Argentina] welcomed him, suffered the indignity of Maradona's further arrest for cocaine abuse and trafficking in Buenos Aires, and still gauged public opinion to be that Maradona should escape the law and not go to prison but be rehabilitated by presidential decree’.

Still, throughout Kapadia’s multifaceted documentary, the director never forces us to take sides but, rather, allows us to admire, witness and judge for ourselves, forming our own opinion. Whatever our opinion, we leave the cinema moved and affected by the life drama unravelling on screen, questions around ethics lingering as we slowly go back to our daily routines.

On a final note, from a specifically Italian point of view Kapadia’s documentary allows for comparisons to be made between Maradona, his values and determination, and the city of Naples and Italy in general. The film highlights the many similarities between the man or the individual, and the surrounding urban space, including the people inhabiting it. In Maradona’s many superhuman accomplishments on the pitch he symbolically fought against childhood adversities and he equally much battled the Italian establishment, confronting slander and prejudices. As a foreign representative for a Napoli team long denigrated and subjected to racist slur and public ridicule, Maradona stood up against injustices both on an individual and collective level, proving to Rome and Italy that the comparatively poor and battered city of Naples could rise through the rankings and thereby also rise above. The hero became the antihero and became once more the hero, as has Naples and its team throughout the years.

And in his parental devotion, Diego Maradona, who financially supported his family from age 15, proved that he was as Italian as any other: loyal to both his team and his parents, compassionate and loving, caring and protective to the core. For this and his professional prowess he must be remembered, revered and respected not only by the Italian community but by the world at large.