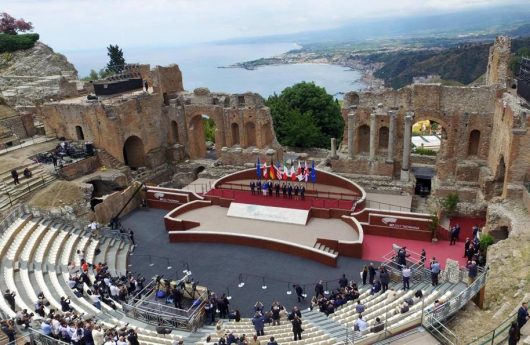 A summit overshadowed by the beauty of Taormina

As the heads of government of the world’s seven most industrialized democracies walked down the streets of Taormina towards the San Domenico Palace Hotel where their meetings were to take place, an old Sicilian man observing the scene was heard saying: “Questo G7 sarà oscurato dalla bellezza di Taormina” (This G7 will be overshadowed by the beauty of Taormina).

He was right. Taormina is intoxicating like no other city that has ever hosted a G7 summit. Whoever goes there is bound to fall under its spell. It’s like being transported to another realm of existence. Such was the experience of the English novelist, D. H. Lawrence who, in a letter from Taormina where he spent two years of his life, wrote: “Here the past is so much stronger than the present, that one seems remote like the immortals, looking back at the world from their otherworld.”

Situated high up on a clifftop overlooking Sicily’s north-eastern coastline, Taormina has a unique combination of attractions: a picturesque medieval design, magnificent ancient ruins, belle époque villas, breathtaking views of the Ionian Sea and, on clear days, the awesome sight of Mount Etna, the highest active volcano in Europe (3,295 meters above sea level) and one of the most active in the world.

At the G7 opening ceremony held at the stunning Greek theatre, the Italian Prime Minister Paolo Gentiloni said that he hoped the summit’s beautiful location would encourage participants to make the world more beautiful. He meant of course a world more committed to peace, cooperation, the well-beings of its inhabitants and a healthy environment even if he knew that the seven leaders would go back home preoccupied by their domestic realities rather than by global concerns.

However, the summit, while just succeeding in softening U.S. president Trump’s reactionary stances on free trade and climate change, has decidedly achieved what former Italian Prime Minister was aiming at when he opted for Taormina as the G7 host city, instead of Florence which was the original choice.

“We decided to move it – Renzi wrote in his Facebook page on the G7 opening day -when, during an international meeting, some leaders made a few bad jokes about Sicily drawing from the usual prejudices and stereotypes. You know my love for Florence, but then I thought we ought to show the world the cultural and historical richness of Italy’s South and Sicily. […] Italy today responds to the bad jokes with the splendour of Taormina, with the Greek theatre where La Scala orchestra will perform in a breathtaking scenery, with the majesty of Etna. […] The images that will go around the world will be a spot for tourism but above all a universal message of civilization and culture.”

Taormina has long attracted an unending series of famous people in search of inspirations or perhaps just the replenishing strength of the air, the views, and the ineffable aura of the town’s immortal past. Lawrence was not alone in being seduced by its atmosphere. From Cervantes to Goethe, Richard Wagner, Oscar Wilde, Truman Capote and Tennessee Williams, Taormina has hosted and inspired a multitude of writers, poets, music composers and artists.

For all the fascinating elements of Taormina, one cannot escape the ever-present ominous aura projected by Etna. Wherever one walks by, the great volcano is always looming, a reminder of mortality, of dramatic downfalls and explosive possibilities. Serene contemplation is hard to come by, when the land beneath one’s feet might conceivably be a torrent of molten lava. With this in mind it s unsurprising to discover that it was on the patio of a local hotel that Friedrich Nietzsche wrote portions of “Thus Spake Zarathustra”.

For Ernest Hemingway, though, the sight of Etna did not raise any sense of nature’s ultimate supremacy over man’s destiny. In Taormina he was happy just to enjoy the relaxed southern Mediterranean lifestyle and its pleasures. The town provides the setting of his short story “The Mercenaries”, where he extols the gentle pace of life “under the orange trees, jasmine matted on the walls, and the moon making all the shadows blue-black”. The protagonist of the story, is an aged soldier of fortune who marvels that everything in this part of Sicily is “all colour”, and the countryside “so pretty that it hurts to look at it”.

The G7 leaders did not have neither the time nor the spirit to fully enjoy the beauty of Taormina but it’s most unlikely that they will ever forget their brief interlude in what Goethe once described as “a patch of paradise”.