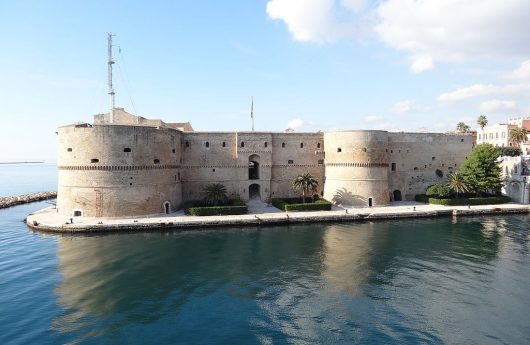 An Italian city of ill-repute rehabilitated by three films

Each year when I attend the Italian Film Festival in Melbourne I feel I get a glimpse into the heart and soul of Italy through the films that have been made, and most loved, by Italians that year.

Last year I was struck by the number of films set in or around Taranto, where my husband is from, which during the seventeen years I lived in Rome, no one ever seemed to have visited or wanted to.

I had been visiting Taranto regularly over the years, spending long periods during Christmas, Easter and summer months. It always seemed strange to me that a place that was so much cheaper than the rest of Italy, with some of its best beaches and spectacular food, was not overrun with Italians and other tourists. To me it was a place of unique beauty, full of love and laughter from my in-laws, and people that stared at me unabashedly as though I was an alien but who were never the less incredibly welcoming and friendly.

I got engaged in 2002 and I was living in Rome at the time. When I excitedly shared the news with my local Roman shopkeepers, café and bar owners that I was to be married, there was a look I didn’t recognise that came over all of their faces, and a distancing. Their congratulations were formal and stilted, quite different from the jokey comradery we had built up over the years. The change seemed to come because I said my fiancée was from Taranto, not because I said I was to be married. I recounted reactions I was getting to the news I was marrying a man from Taranto to my fiancée. To my surprise, he wasn’t surprised: “Taranto doesn’t have a great reputation in the rest of Italy.”

I felt like my parents had told me I was adopted, that the view I had of the world was wrong, and that everyone was in on the conspiracy. I listened to the descriptions given by my fiancée as examples of what others in Italy thought of Taranto—lazy Southerners, violent knife wielding thieves, impoverished communist strongholds, aggressive and illiterate fisher-folk, Mafia corruption, and backward saint worshipping enclaves.

So it was with much pride and some amazement that I watched ‘Daddy’s Girl’, ‘Ever been to the moon?’ and ‘Pomodoro’, three films all set in or near Taranto in the 2016 Film Festival. Each of these films juxtaposed the North of Italy with the South. Only this time the stories had changed. Taranto is portrayed as a bastion of humanitarian principles in a world gone mad with excess and ego; a stronghold of human kindness in a world obsessed with image and power, a place that has not lost its core human values of connection with the land and the life sustaining food it produces, and as having deep wisdom about the true needs of the human soul.

In these films it feels Italy is telling a story, portraying herself as the troubled teenager that went off to find her fortune in the big city and got sick from too much of a good time, returning to her roots to find what she has been searching for, what truly sustains her, was always there.

The common theme in these films is that modernity, luxury, wealth and fame are not always the pots of gold they are made out to be. There are disadvantages to them just as there are to primitiveness, poverty, sobriety and ignorance. It seemed that through these films, Italians were expressing their lessons learnt, and revaluing things about themselves that perhaps previously only outsiders could see. I am looking forward to the 2017 round of films and this years’ stories that Italians tell about themselves.