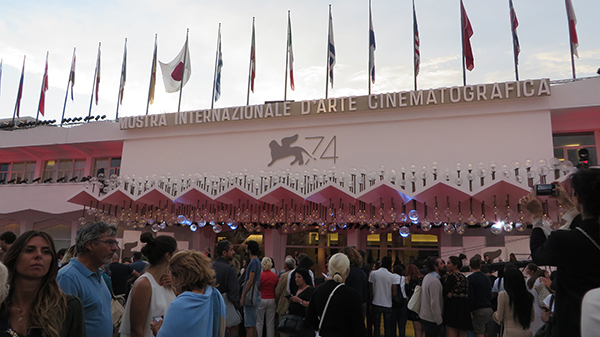 The Venice International Film Festival 2017 (30 August to 9 September) marked 74 years since its inception in 1932.

A country rich in history and culture and with a passion for the arts, Italy is steeped in a cinematic tradition and widely celebrated for its locally concerned yet globally influential neorealist movies of the 1940s and its iconic movies produced during the height of the early Cinecittà decades, and where fascist propaganda films and sweeping historical narratives attracted audiences from near and afar  - the Cinecittà film studios and gigantic movie apparatus, generally known as “The Hollywood on the Tiber”, currently covers a 100 acre area and includes 22 stages, 2permanent tents, 300 dressing rooms and offices, 21 makeup areas and an outdoor tank of 112,000 square feet.

The studios were first established by Benito Mussolini in Rome in 1937, and in its beginnings they took the Italian film industry to new heights through filmmakers such as Vittorio de Sica, Bernardo Bertolucci, Roberto Rossellini, Luchino Visconti, and Federico Fellini. These cineastes wrote themselves into cinema history with films like de Sica’s Ladri di biciclette (Bicycle Thieves, 1948), Visconti’s La morte a Venezia (Death in Venice, 1971), and Fellini’s La dolce vita (1960), Roma (1972), Amarcord (1973), and La città delle donne (City of Women, 1980). The filmmakers are also famous for lending both extraordinary acting talents and stunning faces to the screen, with, e.g., Sofia Loren and, now, Monica Bellucci seducing audiences both nationally and abroad. Both women could be considered the epitome of Italian beauty.

As Italy is now part of an ever more globalised world, the country has become cinematically influenced by trends beyond national borders. This is most definitely the case in the globally impactful and immensely popular Venice International Film Festival (part of the artistically rich and varied Venice Biennale) which alongside the equally influential Cannes Film Festival and the Berlin International Film Festival presents audiences with a whole gamut of film genres and narrative styles and welcomes the works of filmmakers from all over the world. As Venice plays host to this grand event the Italians themselves prefer to call it not so much a festival as a cinematic display or exhibition (in Italian the festival is called “Mostra Internazionale d’Arte Cinematografica della Biennale di Venezia”).

With Italy’s partial move away from its epic narratives of the past that shed light on eras of importance in Italian history, the Venice International Film Festival has become an important platform for Italian and international filmmakers alike. This year’s festival particularly highlighted the names of non-Italian acting veterans Judi Dench (most recently praised for her role in Stephen Frears’ royalistic drama Victoria and Abdul), Anette Beaning (also President of the festival jury), Helen Mirren, Donald Sutherland, and Michael Caine. It is fitting that Caine - producer of My Generation which also screened at the festival - was paid attention this year given his still relatively recent role in Youth (2015) which, although set in the Swiss Alps, is directed by Italian Paolo Sorrentino (two years earlier Sorrentino became widely celebrated for his whirlwind of a movie, the hugely successful La Grande Bellezza). American superstars Jane Fonda and Robert Redford were being paid particular tribute at this year’s festival. The two were honoured for their long careers in and contribution to cinema and were conferred life-time achievement awards. Both Redford and Fonda starred in Ritesh Batra’s romance “Our Souls at Night”, screened at the festival, and they dazzled on the red carpet alongside a number of other celebrities.

Filmmakers especially highlighted this year were Guillermo del Toro (The Shape of Water), actor turned filmmaker George Clooney (Suburbicon), and Darren Aronofsky - the latter’s psychological horror movie Mother! drawing much critical acclaim. These cineastes and others competed for the much coveted top prize the Golden Lion where the winner was del Toro and his “1960s-set melodrama with an amphibious twist”, starring Sally Hawkins in the lead role. Awards were, according to tradition, presented within the following remaining categories: “Silver Lion - Grand Jury Prize (awarded Samuel Maoz for Foxtrot), Silver Lion for Best Director (Xavier Legrand for Jusqu’à la Garde), Coppa Volpi for Best Actor (Kamel El Basha in The Insult), Coppa Volpi for Best Actress (Charlotte Rampling in Andrea Pallaoro’s drama Hannah), Award for Best Screenplay (Martin McDonagh for Three Billboards Outside Ebbing, Missouri), the Special Jury Prize (which, noteworthy from an Australian perspective, was awarded Warwick Thornton for Sweet Country), and ‘Marcello Mastroianni’ Award for Best New Young Actor or Actress”  (awarded Charlie Plummer for his role in Lean on Pete). The additional virtual reality competition this year, said to have featured 22 films and installations, certainly reflected the technological times we live in.

On a final note, and of interest to our Melbourne readership, was the focus on Ai Weiwei at this year’s festival. His documentary film Human Flow has taken him to 23 different countries and is concerned with the refugee crisis across the globe. The bold and controversial Chinese artist was recently celebrated at a parallel exhibition (co-representing Andy Warhol) at the Melbourne National Gallery of Victoria, running from 11 December, 2016, to 24 April, 2017. All in all, the hugely successful Venice International Film Festival attracts film enthusiasts from across the globe and successfully moves with the changing times, combining cinematic strengths and trends from countries all over the world. The festival is a cultural melting pot and demonstrates how it is possible for a country with an open mind and with great artistic traditions to become a symbol of cross-national tolerance, interest and respect at a time when these qualities are sorely needed.