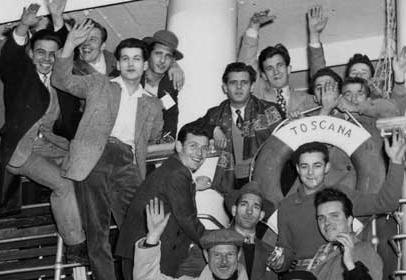 This poem, titled “New Australian Alien”, was published in 1986 by Luigi Strano (1913-2009) one of Australia's foremost Italian-Australian poets. Luigi, who was born in Reggio Calabria Italy, emigrated to Australia in 1930.  The terms “New Australian” and “alien” may appear to be unfamiliar to some readers. These terms were used extensively in the post-war era to describe migrants who were not of British origin. For most of the 20th Century in Australia’s legal language to be an “alien” meant you came, not from another planet, but from another (non-British) country, in other words, that you were foreign.

Strano’s poem conveys the precariousness of being a migrant. Or to use an Italian expression: “to live with two feet in one shoe.” Whether you belong to any society, especially if you have a diverse ethnic or gender background, or sexual/gender orientation, greatly depends on media discourse and the political climate.

Today, unfortunately, we are still “alienating” people through our use of language. A good example is the current debate about marriage equality or same sex marriage. But to return to the theme of emigration. Some of you will be aware of the new citizenship act that the Government has been trying to get through the Senate. Not all will have read the finer print of the bill. In practice it would give the Minister for Immigration the power to revoke the citizenship acquired by any migrant if when applying for citizenship, the migrant “misrepresented” Australian values, or if their “commitment to integration” was questionable. The minister can also withdraw approval for a previously granted citizenship application. In both instances the migrant would have no right of appeal to a court. The outcome would be entirely at the minister’s discretion.

Luigi Strano had another good reason to write his poem. Not many will know that during the Second World War, the Commonwealth government interned 7104 civilians. Of these, thousands were naturalised Australians and some were even born here. How could this happen? Because the Government believed that anyone of Italian, German or Japanese origin might decide to assist the Axis powers in their war against the British Empire, which included Australia. So as a “preventative” measure, these civilians of “alien” origins were torn from their families and interned for years behind barbed wire and watch towers in camps that dotted the Australian landscape. The internees could not appeal to a court. Whether you were interned depended on what the authorities thought. At the time, the police also raided Luigi’s home to arrest him and to confiscate any “compromising material.”

They found a poem, titled “Sydney”, written in English:

Sydney city of my dreams / if I ever think of leaving you… / my eyes become moist with tears. / If I ever return / to the land of my childhood… / Yes. I remember everything and everyone, my brothers. / But the memory of you, Sydney will always be closest to my heart.

One of the policemen, moved by these words, simply said “Very good, Lou” and decided not to arrest him.

We can only hope that Australian authorities will start reading the poems of those asylum seekers that they have been banished to Nauru and Manus Island, and of those migrants living here in Australia whose access to social security they wish to deny. I would also add to these poems those written by Indigenous Australians, who have long been deprived.

If the habit of reading poetry spreads, maybe we will be able to save the world too.

Dr. Gerardo Papalia is a Senior Lecturer at La Trobe University in Melbourne. He has completed degrees in Italy and Australia and has taught in universities in both countries. He is a specialist in the study of the history and culture of the Italian diaspora in Australia which he analyses through post-structuralist theoretical approaches. His publications cover a wide range of disciplines including history, cinematography, religious belief, literature and cultural hybridity.

THE SHIFT THE ITALIAN CULTURE UNDERGOES FROM NEWLY ARRIVED ITALIANS