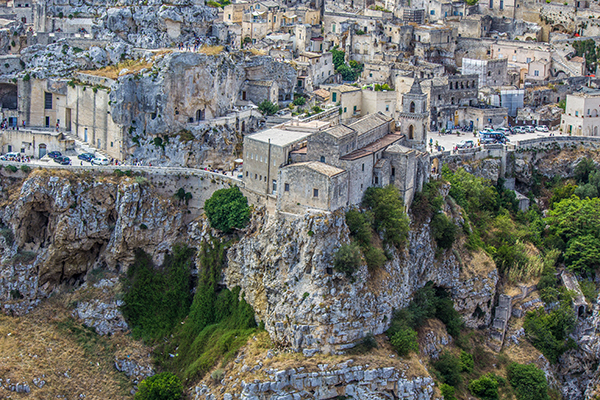 Matera: from Italy’s national shame to European capital of culture

It's a familiar cycle throughout Italy and all over the world. The humble, traditional ways of living were abandoned, for a newer, more comfortable lifestyle.

Now in the age of consumerism, enviromental concerns and technology addiction, there is an international trend toward the return of simplicity. All over the world millenials are turning in interest to their elders, seeking their knowledge of traditional ways, reclaiming their vintage belongings and cooking methods. There is a renewed appreciation for things that are natural and bespoke, that remind us of a simpler time. We are nostalgic for an epoch we view now through rose-coloured instagram filters.

No city is a more extreme example of the phenomenon than Basilicata’s jewel, Matera. Matera is the first southern Italian city to be named the European Capital of Culture. This is a title that enables the city to apply for millions of euros in public funding for events and new infrastructure. The intention of the funding program is to create cultural awareness and interaction between the member states of the European Union, as well as to generate prosperity for the city itself. In recent years it has been reported that public funds spent in the programme generated revenue of up to five times the investment. More than just prestige and international notoriety, being named a ECoC provides an excellent opportunity to improve local economy and industry, an opportunity that could not have come at a better time for this upcoming tourism destination in one of the most unexplored regions of Italy.

The tendency to move from old to new, to old again is strong in Matera, where a return to the market place, traditional cooking and the historical centre is well alive, with its plentiful gastronomic offerings and up to 25% of the historical centre estimated to be available on AirBnB, providing the opportunity for visitors to experience the wonders of years past. It also appears to have undergone these transformations in fast-forward, because in Matera, just decades ago, a good percentage of the city’s population were literally living in caves.

They are known as sassi (stones), and are a section of the historical centre predating to Paleolithic times. The sassi have no windows. Until the late 1980’s, they had no running water or electricity. Traditionally, large families would live inside them with chickens, mules and other livestock. Hygiene was poor and disease and infant mortality was high. The writer Carlo Levi, when exiled by Mussolini to Basilicata, gave the city international notoriety when he wrote that he had never seen such poverty and poor living conditions.

When World War 2 ended, Italian prime minister Alcide De Gasperi declared that the poor conditions in Matera were a state of emergency, and Italy’s ‘national shame’. With post-war funding, public housing was built in the city’s outskirts and the inhabitants of the sassi were evacuated from their homes. Traditional living became, reluctantly in some cases, modern living. The people were forced to embrace running water and electricity. Health and infant mortality rates improved, but the city’s poverty took on a different face, as the public housing dwellers now had no-where to keep their animals, and the younger generations lost touch with their city and culture, as they joined the masses from the rest of the mezzogiorno in their migration to the North, and overseas, in search of work.

So what happened to Matera? Well, it sat empty and ghostlike for a decade or two, waiting for the progressive types to arrive and make the old new again. Then the process of gentrification began, as it has in so many other places, with the artists and hippies, who ‘rediscovered’ Matera’s sassi as early as the 1970s. By the 1980s, the council was approving the repopulation of the sassi and allowing electricity and water to be connected there. In 1993, Unesco declared Matera a world heritage site. The local tourism industry took off, focusing on history, artisan products and gastronomy, and the place that was once Italy’s ‘national shame’ and a symbol of destitution and squalor, was eventually selected as the European Capital of Culture for 2019.

What does this mean for Matera, now and in the coming years? The funding has been secured, over 400 million euros from Rome and Brussels has been allocated to Matera’s overall smartening up. Unfortunately, the slow, complicated bureaucratic system that Italy is renowned for could mean a lost opportunity for this resilient southern Italian city. ECoC cities are given six years to secure funding and prepare for their year in the spotlight, but 2019 has begun, and five of the seven buildings that were intended as venues for some of the cultural events are not ready, nor are they expected to be ready before 2020, according to labour unions and local businesspeople. Too late.

The Guardian reported in September, 2018, that there is still no dedicated railway to the city, despite 200 million euros of the funding allocated to build one, and the Bradanica highway, a road intended to connect Matera to the north of Basilicata, is still under construction after 40 years. Not even the influx of European funding was able to speed up the construction. Accessibility is going to be a setback for the city as it should be enjoying its year in the cultural limelight.

Not everyone, however, is concerned about these setbacks. According to Enzo Acito, the former director of tourism for Matera, it was widely known that many of the deadlines would never be met. It was enough to ‘just be elected’ a European Capital of Culture.

Matera has, after all, still come a long way. It represents a shift in values throughout Italy and Europe, where there are many town centres that have been abandoned for more comfortable apartments at the cost of community living, a simpler life and of course, culture. There are residents of Matera that remember this life, and it’s a memory that in the midst of all the notoriety, the younger generations are eager to preserve.