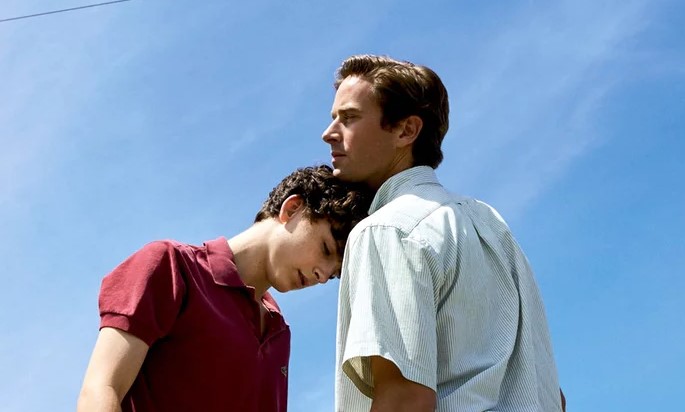 Luca Guadagnino's film is a serious contender for the Oscars

Set in a non-specific northern Italian location - we are told the narrative about to unfold develops “somewhere in Italy” - in the early 1980s and based on the 2007 novel by Sephardi Jewish writer André Aciman, Luca Guadagnino’s multi-award nominated new film Call Me by Your Name (or Chiamami col tuo nome in Italian) is an ageless celebration of love and life, of scenic beauty and parallel human beauty - particularly that of the male body.

The film also explores the transitory nature of human existence and themes like youth and aging, loss and heartache, religious affiliation, affinity and faith, and parental, marital, as well as both male and female bonding.

These being themes we can all relate to, Guadagnino’s fifth feature film engages and captivates, it presents the viewer a story that reads like a poem and we readily identify with the feelings of the two male protagonists; emotions that cut deep and are ultimately universal. A soundtrack including various singers and composers is so haunting and effective that music as an accompaniment to images of a breathtaking scenery becomes a character in its own right. This pastoral summer landscape, in turn, enhances the gradually heightened emotions of the protagonists and the film becomes a welcome contribution to the celebration of love between members of the same sex. It is perhaps particularly significant for Australian audiences who only last year saw gay marriage rights finally successfully included in the political agenda.

Call Me by Your Name begins with images of Greco-Roman sculptures where the opening credits are superimposed over seductive naked male bodies. These images set the tone for the narrative to follow. John Adams’ rapid piano piece Hallelujah Junction – First Movement accompanies this initial visual mosaic. We are transported to an Italian idyll where we first meet precocious adolescent Elio (played by dynamic actor Timothée Chalamet whose character has been called a “force of nature”[1]) and his openminded parents Mr and Mrs Perlman (played by Michael Stuhlbarg and Amira Casar) holidaying in their 17th century villa. The multilingual trio of Jewish heritage engage in fluid conversations where they effortlessly switch between Italian, French, and English. Smoothly interrupting the predictability of everyday holiday existence 24-year-old Jewish-American scholar Oliver (enacted by a suave Armie Hammer) steps into the narrative at the very early stages. He sets out to conduct doctoral studies as an intern for Mr Perlman and seduces everyone with his appealing masculinity, his foreign charm and intellect. Handsome and attractive, he seems initially to be unaware of the effect he has on his host family and he commands also the viewer’s attention with his sheer physical presence. It is clear that Oliver embodies the ultimate male previously represented by the perfect male sculptures in the opening sequences of the film. Similar sculptures are visualised and favourably commented on throughout the film as they are projected to the viewer on screen - within the film. “It is as if they are daring you to desire them”, the older academic observes midway through the film while at the same time he is also able to aesthetically appreciate the both physical and intellectual qualities of his research student. Oliver is undoubtedly the better looking of the two – but then again, he may also be several decades younger – and although Oliver is comparatively still in the early stages of his research career, at times he surprisingly matches his mentor in intellectual sharpness. The two collaborate well and engage in vivid conversations while visually they both share an appreciation for the sculptured male body.

This mutual appreciation for the smooth male form soon spills over into homo-erotic undercurrents that run through the narrative and become a force driving the story onward. The awakening desire between men in the film does not involve Oliver and Mr Perlman but Oliver and Elio and, although subtle, their mutual attraction grows stronger and bolder as the story unfolds. As the two set out on regular bike rides through the Italian landscape, it is as if they formed a part of a painting that envelops them in its scenic beauty. Their love story develops effortlessly and is visually enhanced by images of their natural environment. Guadagnino skilfully bridges initial platonic love and spiritual bonding and the men’s physical desire for one another in intimate scenes where they kiss but where the sexual act is never graphically visualised. This allows for the poetic and metaphorical qualities of the story to remain intact and many scenes read like dream sequences.

As Elio and Oliver grow closer they eventually begin to mirror each other and undergo a symbiotic process of transition and metamorphosis. “Call me by your name and I’ll call you by yours”, Oliver whispers during a moment of tenderness and from hence onward Oliver becomes Elio and Elio becomes Oliver. As they later refer to one another they do so by exchanging names and the two have become one. They begin to see each other “without my eyes” and bond on a deeper level. As they do, Elio undergoes a transition from a self-confident and apparently carefree young man with a gift for playing and appreciating music (his piano playing skills are impressive and he has a sound understanding of musical composers) and who relates well to women on a both platonic and intimate level, to an ever more sensitive and with that also more vulnerable individual. His feelings for his new, older male lover move along a spectrum from initial infatuation to mental connection and sexual desire, to deep pain at the prospect of Oliver leaving as his research stint comes to an end. As the two share a few days away together in the Italian Alps Elio learns what true love is and inevitably experiences deep heartache as he has to say goodbye to Oliver at the platform. Italian place names are heard through the loudspeakers as the main locations along the train route are being announced, and the men’s final minutes together relentlessly tick by until it is time for Oliver to depart. The viewer is left in a moment of suspense as, captivated by the moment, we sympathise with Elio and feel his pain.

Emotionally hurting and unable to engage in the practicalities of making his way back home by train, Elio calls his mother who picks him up by car. The scene where they journey back home is void of dialogue but Elio’s facial expressions speak volumes. Maternal comprehension and empathy is, in turn, reflected in her respectful silence. As Elio later physically reunites also with his father the latter shows self-awareness when he declares that “When you least expect it nature has cunning ways of finding our weakest spot.” This comment echoes his statement in an earlier scene: “People who read hide who they really are.” Elio learns that the emotional turmoil he is experiencing at the loss of Oliver has been felt also by his father - for another man and in a different period of his life. In this emotionally charged, captivating scene Elio is encouraged to embrace his feelings, as “[t]o make yourself feel nothing so as not to feel anything” is “a waste.” Male bonding is taken to a different level and the years that separate father and son momentarily disappear as both Elio and the viewer get to know Mr Perlman better. Love in all its guises conquers gender barriers and becomes timeless and ageless as both Guadagnino and the original writer of the story that has opened up to us teach us that love enters our hearts whenever and for whomever it may be.

As the film comes to an end, Elio receives a phone call from Oliver during Jewish Hanukkah and he learns of Oliver’s imminent marriage. As the final credits roll across the screen to the sound of Sufjan Stevens’ touching song Visions of Gideon the raw power of this last scene is unparalleled and the sight of Elio’s face as he lets the sadness and emotions wash over him will enter cinema history. His heartache transcends the screen and is physically felt by the audience: “Call Me by Your Name is the kind of movie that makes you sit through the credits with tears rolling down your face, staring blankly at the screen with a lump in your throat and tightness in your chest.”[2]

Engaging the viewer on every level, Call Me by Your Name is an emotional and artistic tour de force that leaves an impact on the viewer long after the final credits have ended.