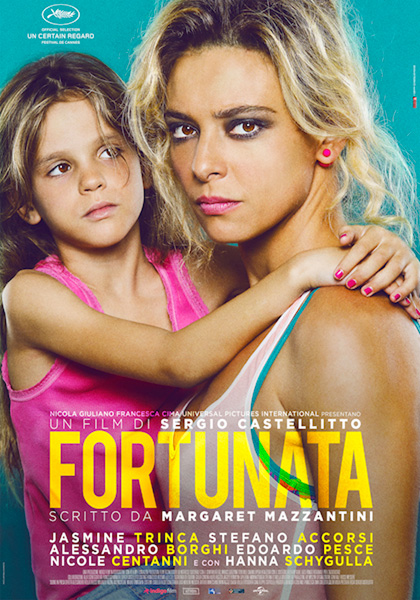 This year’s Lavazza Italian Film Festival (Melbourne 14 September - 8 October, 2017) offered a selection of fine films, some of which have recently been released.

As a successful finale to the festival, Palace Cinema in Brighton Bay screened multi-award winning Fortunata (Sergio Castellito, 2017) and with that left viewers with long-lasting cinematic impressions and an insight into a human fate played out on screen that touched and entertained us all at once. The film, a vibrant and joyous scene from which features on the cover of the festival programme and corresponding poster, captivates and gives food for thought while situating the plot in the partly gritty outskirts of Rome (it has been noted that the film is “[s]hot in the same working-class Roman suburb as Pasolini’s neo-realist classic Mamma Roma”[1]), well away from the hustle and bustle of the more glamourous central business districts.

That of Fortunata is a hot and dusty suburban environment that visually underscores the earthy spirit of a vivacious female main character. This woman is ultimately a feisty survivor despite the obstacles she faces throughout the film. True to her nickname meaning Lucky in English (she seems to go under no other name and if she did it would only distract from her own unwavering optimism and innate luck) Fortunata - played by a memorable Jasmine Trinca who has received accolades for her performance by being conferred Un Certain Regard Cannes Film Festival and Nastro D’Argento awards for best actress - is driven by a strive for security and stability and ends up celebrating life in momentary bursts. With a cascade of rebellious blonde hair and almost constantly pictured in physically appealing sleeveless bright tops and miniskirt against a suburban backdrop, she moves fast, acts fast, and speaks fast and attracts both men and women also with her exuberant yet at times also troubled personality where her personal ordeals and dilemmas reflect real, off-screen issues dealt with by women subjected to mental and sexual domestic abuse, and who lead a precarious existence professionally and financially.

Watching the film (which has received rather mixed reviews, with, e.g., Jay Weissberg of Variety delivering a surprisingly harsh verdict[2] and Tom Bond arguing that “Trinca owns every frame of this film, and there’s not much it offers beyond her dogged performance”[3]) viewers will find themselves able to draw immediate links to another film by Castellito and also to Spanish powerhouse Pedro Almodóvar. Thus, Fortunata shares commonalities with Non ti muovere (Don’t move, 2004), a film both directed by Castellito and likewise starring Castellito in the male lead role. Yet compared to female character Italia (movingly performed by an impressive Penélope Cruz who here speaks fluent Italian) Fortunata never really comes across as quite as downtrodden and her character, one might argue, is less multifaceted. And yet, a complex sense of realism enters also this 2017 visual narrative on several occasions. Both characters, symbolic of women subjected to plights today and throughout time, are hard done by and abused by the men close to them. In a true Stockholm syndrome fashion, struggling and exploited Italia ends up falling for her upper-class rapist who, coincidentally, is a medical professional just like his more tolerant yet perhaps weaker male counterpart in Fortunata. And while also Fortunata is haunted by her tormentor - of a husband - she bears her suffering stoically and never quite surrenders to her abuser. This is the case in Non ti muovere where male obsession and possession and female victimization nevertheless gradually give way to love (albeit one of a distorted kind).

Fortunata sees Castellito again pairing up with wife Margaret Mazzantini. She has written the script on which the film is based and is also the author behind the novel Non ti muovere (2001) and the gripping Venuto al mondo (Twice Born, published in 2008 and with the subsequent film directed by Castellito again starring Penélope Cruz). The aesthetically pleasing, visually effective opening scene of Fortunata seemingly borrows elements from Almodóvar’s La mala educación (Bad Education, 2o04) - and on occasion the film also shares cinematographic commonalities with La Grande Belleza (Paolo Sorrentino, 2013). Through an aerial shot the film camera zooms in on a group of Asian women engaged in external physical group activity where they move their arms and legs slowly, perfectly synchronised. The camera then pans out and away from the determined group of women dedicated to their cause, and who are apparently present for decorative rather than narrative effect and perhaps to reflect the multiculturalism of an ever more globalised Italy. A sweeping panoramic shot shows us the ruins of a Roman aqueduct situated behind the Parco Giardino Sangalli4. We proceed to enter the apartment building that had formed the architectural backdrop to the previous scenes. Here we first meet Fortunata and her daughter as they prepare to they themselves exit the building, the camera following their moves in a fluid tracking shot. Similarly to in Castellito’s opening scene, in Almodóvar’s La mala educación - at once controversial, provocative, and brutally honest - we are presented a mass scene where a group of young male adepts engage in physical exercise outside the convent where they supposedly receive a strict Catholic education (one which turns out to be flawed when the monks are seen taking sexual liberties, reflective of the off-screen liberties taken by a powerful Spanish Catholic Church during the Franco era).

Despite its occasional parodic and (more often) melodramatic elements, Fortunata stays true to its contemporary Roman roots in the sense that the vibe of the place and zest of the characters is what propels the plot forward. A film about human relationships on a number of levels, it is ultimately about the still unbroken bond between mother and daughter. In smatteringly fast Italian (at least to foreign ears) Fortunata - who precariously gets by as a hairdresser and harbours a dream of, sooner rather than later, opening her own beauty parlour - converses with individuals primarily ranging from her 8 year-old daughter Barbara (Nicole Centanni), to her close soulmate and intended future business partner: bi-polar and apparently drug-infused Chicano (Alessandro Borghi), her insidiously obnoxious and abusive husband Franco (skilfully played by Edoardo Pesce) who she has separated from but not yet divorced, and his almost diametrical opposite: a psychologist who after initially making therapeutic headway with Barbara (a girl in need of listening and being listened to and who learns about “la forza interiore”) ends up jeopardising the sensitive patient-doctor relationship and thereby his own professional integrity and reputation when his calm erupts into passion as he falls for Fortunata herself and initiates a steamy relationship with her. At first sight bringing back memories of the grand cinema of the past, worth noting, as well, is impressively prolific renowned actress Hanna Schygulla who first made a name for herself under director Rainer Werner Fassbinder and the New German Cinema but who in Fortunata stars in the less impressive role as Lotte - an elderly woman who tenaciously clings on to her past career as an actress by obsessively reciting lines from Antigone5 (Ingmar Bergman once had a similar idea but in Persona, 1966, his no longer performing lead actress played by Liv Ullman instead shuts down, shuns the limelight, and refuses to talk).

While the plot of Fortunata is apparently simplistic and easy to follow, the action unravels effortlessly, each scene engages, and Jasmine Trinca is a refreshing whirlwind of an actress who shines and captivates with her sheer presence on screen.

[5] In Stephen Dalton’s words. “Schygulla is wasted in a thankless semi-cameo role that gives her barely a handful of incoherent lines.” ‘Fortunata’: Film review Cannes 2017. Retrieved from http://www.hollywoodreporter.com/review/fortunata-review-1008304