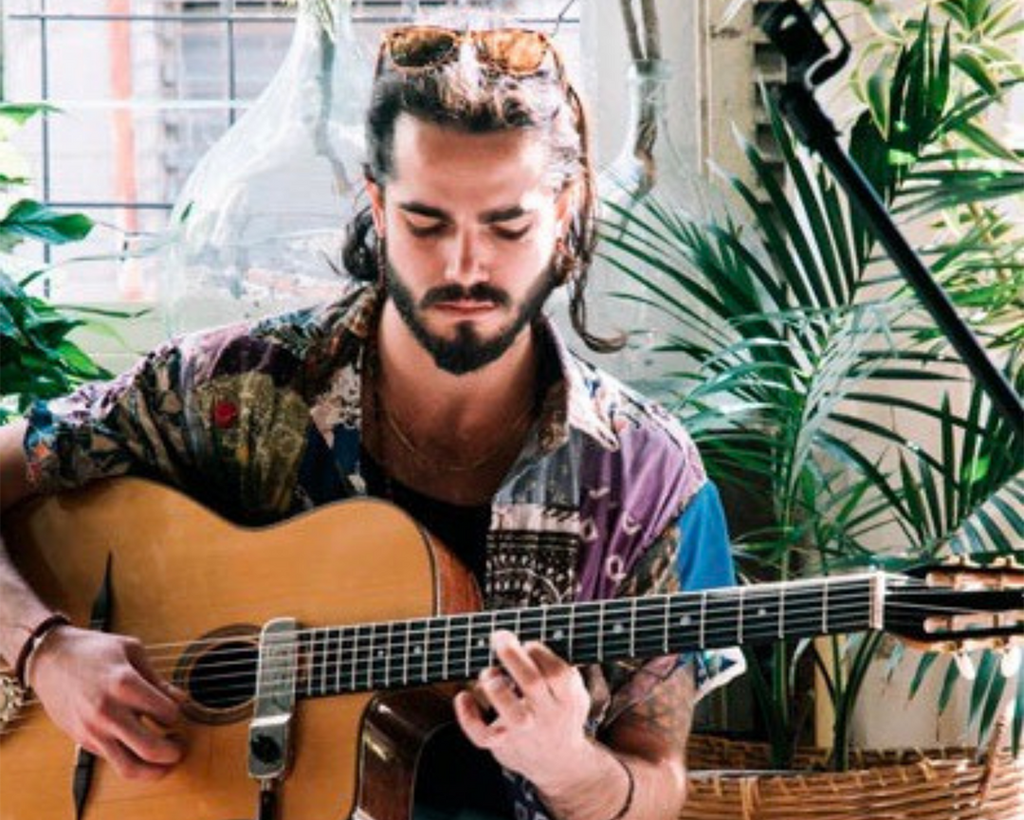 A Flame that Burns Within

For the Love of Music and Art.

Step into a gypsy jazz event anywhere in Brisbane and amongst elegant Selmer guitars, rollicking dance floors and wine-soaked, cheery revellers, there is a good chance you’ll encounter a few of the emerging Italian musicians taking the scene by storm. Gypsy jazz or jazz manouche originated in 1930s France thanks to Romani guitarist Django Reinhardt, and in recent years its popularity in Australia has grown through the late Ewan Mackenzie’s Oz Manouche Festival.

One such musician dedicating his life to carrying on this lively artform is Dany Avanzini. Over the years he’s performed with The Gypsy Cats, Amy Jane& Her Vipers and several other local bands, gracing stages at Woodford FolkFestival, Island Vibes, and Brisbane Festival to name just a few. Completely self-taught musically and now a notable gypsy jazz name in Brisbane, he is living proof of the power of focus and perseverance.

Dany was kind enough to share with me his story of finding success as a musician and painter in Australia. Having seen him play countless times, I can attest to the mastery of his plucking, his fingers skipping over the strings with impossible speed and dexterity. It’s truly a pleasure to watch a man so in his element; jovial, humble, and warm, onstage and off. So I’m surprised when he admits, ‘I never thought in my wildest dreams I’d ever do a paid gig, are you crazy? Now it’s been maybe three full years that I’ve done only music and art to support myself and it’s been going well. I was up to like five gigs a week and thinking, how is this possible?’

At 17 Dany left his parents’ house in Sardinia to move to London where he worked as a bar tender for five years. When it came time for a holiday, he decided to visit Melbourne for two weeks. ‘I remember my friends saying, “oh, you’ll never come back from Australia if you go!” At the time Dany thought that was a bit extreme but, he adds laughing heartily, ‘Nine years later I’m still here with a citizenship!’

‘When you’re young, you want to go to the other side of the world and make it on your own. So I tried that and it was awesome. And now I’ve made it to a place that I actually fell in love with, so I decided to stay here. I’ve been in Brisbane for nearly eight years now.’

It was London where his relationship with music began. His housemate taught him to play some blues on the guitar and for Dany it was love at first strum.‘When I heard Django for the first time I was like “whoa!” I’d never heard anyone do that with the guitar, so I started learning for myself. I did art all my life but then music came in after and I kind of left everything for that. I’d listened to Django in London but I fell in love with it when I saw it played live in Australia.’

A few years later Dany first performed gypsy jazz at the little FortitudeValley bar where he was working, to try to draw a crowd in on Sundays. ‘After a month it started going off and there were queues outside. Local jazz musicians started showing up. That was the beginning of the product. We were all playing that music for the fun of it and that jam was aimed more towards the involvement of people. After I got to a certain point I realised I had to lock myself inside and study guitar properly not to perform but just because I wanted to be at that level where I could jam with my musician friends.’ Dany’s confidence grew immensely in this supportive musical setting where everybody was encouraged to play, regardless of skill level. Once he learnt the repertoire he started being offered paid gigs and he hasn’t looked back since.

While COVID-19devastated the music industry in March, this year has seen an increase in art commissions for Dany. I see his eyes light up when I ask him about being able to immerse himself in his first passion, painting.

‘People are buying more of my art, so that’s good. We’ve converted the garage into a studio so I can throw paint around as much as I want and make a mess, and I can work on three paintings at the same time. I’ve been drawing since I was like 5, I’ve done art all my life. But sometimes it’s almost like you’re never satisfied. I’m learning to live with that feeling, that non-satisfaction. It’s like a flame that burns within you.’

He confesses that the marketing side of his work is not his strong suit, reflecting on the wise words of his teacher in art school who said, ‘You can choose where your energy goes. If you focus 50% on your craft and 50% on promoting it, the quality of your craft will be 50%. If you focus 100% on your craft, trust me, people will come and take it from you. I try to live by that; let the art speak for itself.’

Compared to his past working 60-hour-weeks in hospitality, he couldn’t be happier in his current situation.

‘As for making a living, it feels so much better when it’s done with art. Your money becomes of more value to you when you make it with something that you love.’

Alongside Salvador Dali and of course, Django, his biggest inspirations remain his parents in Sardinia.

‘My Mum is the best person ever. She’s a physiotherapist, a counsellor, a healer and she just wrote a book. My Dad is the real proof that you can centre yourself, that you can overcome a lot of challenges in life. I look up to them a lot and I don’t think I’d be who I am today if it wasn’t for them. I’m very grateful for that.’

With the music industry’s future increasingly uncertain, Dany’s sights are currently set on growing his painting practice and he hopes to secure representation from an art gallery.