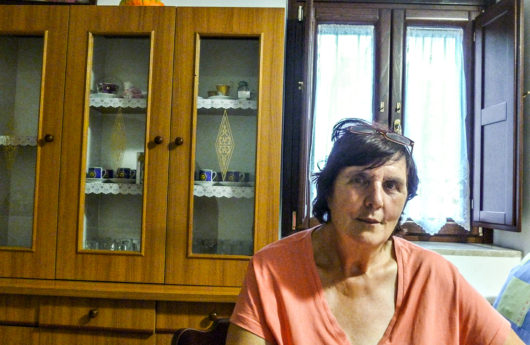 “I saw my father for the first time when I was five years old. My zio, mum’s brother, had been back to Italy several times, so I knew him. When we disembarked from the ship in Melbourne, I ran to embrace my zio rather than my father.”

Such is Francesca Mazzetelli’s first recollection of coming to Australia in 1956 from Calabria, to follow her father five years after he had left the family to find work and make a future for himself and his family in a foreign land.

“I didn’t know who my father was,” Francesca tells me as we sit across a kitchen table in Grumento, a picturesque village in the Potenza region of southern Italy. “He barely knew any of us really.”

Such is the depth of her recollection that Francesca pauses and sighs loudly, her eyes misted over, and I understand how intense such memories still are for her.

“My father didn’t know me or my sister Connie,” she adds. “He always said that he was sfortunato in this. That he was unlucky in having missed out on getting to know us as children. But he really had no choice but to migrate. He already had three children, a small house, and worked for others. I am the fourth daughter. My older sister was 14 when we moved to Australia. She too had missed out on getting to know dad as a child. He had been away in the war, so she was six by the time he came home from that.”

It is apparent that Francesca is both saddened by and yet proud of all that her mother and father had to endure as young people trying to raise a family in very difficult times. There is a quiet dignity in her manner as she recalls her life in Australia as a child and teenager; her English still fluent even after years of being back in Italy with her Italian-born husband.

“School in Australia was hard for us kids,” she whispers. “We were relegated, and as I was big for my age I was always put at the back of the room. I was conscious of the fact that we were different. The language, the customs. Other kids had bikes, we didn’t. Such a simple thing, yet so important to us because it made us stand apart. It hurt. Those things that make you feel that you don’t belong, they hurt. We went to Sacred Heart Primary School in St George’s Road Preston. I remember that clearly. And I remember my parents both saying that the bad things would pass. They told us that over and over.”

Despite the rawness of her memories of her childhood years in Australia, there is no bitterness in Francesca’s voice as she talks about that time in her life. She is accepting, even resigned, to the fact that this was just how it was.

“We were called wogs,” she continues. “I can remember as a school girl being on a bus and seeing an old man who couldn’t speak English struggling to tell the driver where he wanted to go, and other passengers saying – All these dirty wogs come here and don’t know how to say a word. – I was so upset by this that I barked out, – You have to thank the wogs who’ve come here and civilised you! –

But even as she tells me this I can see that Francesca is not happy with that younger self that reacted in that manner. And she confirms this when she adds, “I felt both good and bad for saying that.”

Perhaps because, despite the difficulties of language and the struggles of customs that marked her and her siblings out as being from another country, Francesca is grateful for the opportunities Australia gave her family, and she is conscious of the fact that her parents did their very best to help them adapt to their new surrounds.

The great irony of Francesca’s life is that at the age of 19, after leaving school at age 16 to go to work— because “the Italian mentality of the time was that boys had to go to school and study and girls got married, and maybe had a little job,” – she married Biagio Lorenzo, himself a migrant, and after making a home for themselves in Fairfield, they went back to Italy in 1971 for what was to be a holiday, but Biagio found that he missed his homeland too much to want to remain in Australia.

“Biagio was a friend of my brother-in-law, my sister’s husband,” Francesca explains. “We met by chance when my brother-in-law came to pick up my sister from work and Biagio happened to be with him. We courted briefly and married soon after, which was normal at that time.”

Sadly, though Francesca was to suffer two miscarriages and a still-born in quick succession, it was this that encouraged the holiday to Italy, and precipitate yet another, perhaps ironic, change in life direction for Francesca.

A native of Grumento, Biagio was reunited with his mother and sister, and with his own eyes saw that many of his friends who had remained in the village had indeed prospered.

“Biagio hadn’t moved to Australia because of economic necessity,” Francesca explains. “His family had land and could make a living from it. Biagio went to Australia because he and three friends wanted to see this country they had heard so much about. When we came back here (Grumento), he realised that even those who had less than his family were doing well, were progressing.” It was enough to convince Biagio to move back to Italy in 1972, taking Francesca back to where she had left as a five-year-old to follow her parents in seeking a better future.

The irony is not lost on this quietly spoken but eloquent woman. “I didn’t grow up on a farm,” she says. “The closest I’d been to an animal was a cat or a dog, and yet here I now was, working and having a family on the land.”

Her parents were not accepting of their daughter’s decision, seeing it as a backward step, yet they did not interfere. “La moglie segue il marito” (A wife follows her husband) she says. “That was the way.”

In 1975 Francesca did have a child, a son, but a medical mishap left him with severe eye damage, the result of which was that Francesca spent the next seven years trying to find means of helping him, and this, she tells me, “left little time for worrying about why we had come back to Italy. That was the thing that blocked me insisting we go back to Australia. Once I’d had my family I started to really miss my parents.”

Did she have regrets? Francesca considers my question for some moments then says, “No, not now. I miss my sisters and nephews of course. But I don’t miss Australia. I’d only live there if I had to. We have learned to block the bad things about Italy; the things you can’t have. You focus on the good.” She pauses, then adds, “My father came to visit us here before he and mum passed away. My son was three years old then. He’s in his 30’s now, so it was a long time ago. Dad was happy with what he found, how we lived, what we’d made for ourselves.”

As she says this, Francesca smiles warmly. The wheel had gone full circle and somehow it had all come together. Her parents had accomplished what they had set out to do, helped make a future for themselves and their children.