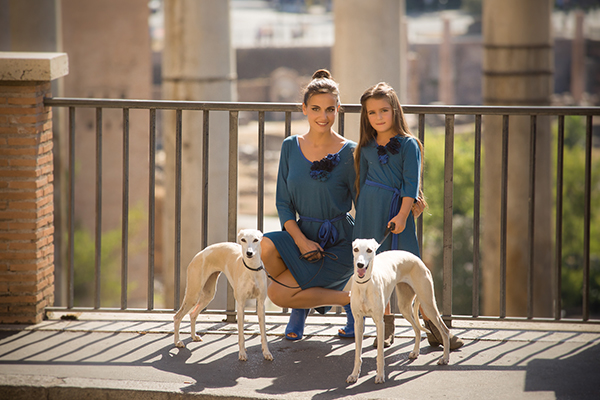 A beautiful Sunday, the day of Carlo’s confirmation, began with hasty preparations of the family and guests who arrived to Vinci from all over Italy.

Ciriana, an attractive and professionally successful single woman in her late thirties, receives an unexpected email message. It’s from Maurizio, a man with whom she had an intense love story fifteen year earlier. The message has the effect of re-opening an old wound in Ciriana’s heart, so much so that she refuses to read beyond the subject line that says: “I dream to see you in your granny’s pearls again”. In the previous chapters we learn that Ciriana and Maurizio fell for one another while they were studying at the University of Florence and after graduating, they both were granted a scholarship from the New York University and moved to New York together. They seemed destined to be married until their life took a turn for the worse. Maurizio had a serious skiing accident and had to undergo a period of treatment in a New York hospital. After completing her PhD, Ciriana was forced to return to Italy as her student visa had expired. She waited for Maurizio to reach her after his full recovery but one day she learned that he was about to marry Diana, a flamboyant and flirtatious American girl who had joined their circle of friends during their PhD days. Maurizio’s decision came as a blow which inflicted a deep wound in Ciriana’s heart but slowly she regained control of her life by focusing on her professional career. The story resumes the day of the confirmation of Carlo, Ciriana’s sister son, in the beautiful Tuscan residence of Ciriana’s wealthy parents.

Even though the holy mass was to begin at noon, everybody woke up too late to remain calm. Running from one place to another, ironing their shirts and jackets, looking for a hairdryer or tripping over a running dog, swearing and laughing, all of them were bearing consequences of staying up late the previous night.

Ciriana’s outfit - a dark blue shift dress with a draped neckline - was impeccable. Also her shining long hair never looked better. She was ready. The only thing that made her nervously check her looks over and over again was a scary thought of seeing Maurizio, her high school boyfriend, for the first time after their breakup several years ago.

What a relief that there was no sign of him in front of the Church of Santa Croce! Instead Ciriana was watching a steady influx of fabulously stylish people who had put loads of effort to look perfect on this special day. Ciriana thought that nowadays it was such a unique and marvelous view.

Women of all ages were wearing smart cocktail dresses of all possible shapes and colours, splendid accessories and fantastic shoes, which by no means looked adequate for cobblestones of Vinci. Majority of them chose toned dark shades avoiding black reserved for elder women. It was apparent that they did not try to experiment with colours, knowing that dark clothes match best with their black hair and olive complexions. Vivid tonalities however were used in abundance by the young generation of new trends’ adopters.

Solemn dimness of the medieval church’s interior rested in a perfect harmony with the gravity of its visitors’ elegance. Heads sticking out from among the sea of black-haired man and women were trying to catch a view of their teenaged sons, daughters, nephews and cousins gathered at the altar. They could hardly hide their emotions seeing the youngsters looking so sublime and mature. When the ceremony got to the end and the time for greetings and congratulations came, for many families it was the moment of an affectionate reunion with separated family members.

Thank god Maurizio spared Ciriana embarrassment in front of everybody! Even though Cristina invited him to come over, he must have had decided rightly that this was not a particularly good idea.

When the jolly crowd arrived to the house after the ceremony the good mood continued to prevail among the guests. The reception in the garden was all about eating, drinking wine, laughing and bringing back best memories of the past.

Ciriana however did not feel quite well. Was it because of fatigue and lack of sleep or perhaps the contents of Maurizio's email that she had finally had the courage to open?

The email received unexpectedly after several years of silence between them was both eye opening and shocking for the woman. A thunderstorm of toughts and emotions, like disbelief, love mixed with hatred as well as regrets of the lost romance and wasted young years took over her, spoiling the pleasure of the family reunion.

Maurizio explained that marrying Diana was for him a way out of the complicated relationship with Ciriana, the one and only love of his entire life. When they were about to graduate and return home to run their family business, he feared of responsibility. He also ran away of Ciriana’s disease - the epilepsy she was born with - and even if kept under control, scary for him. He hated  watching his love suffer and despised a thought that she might die. He wrote also that he knew he was a cowardly bastard but these things a boy understands only after he becomes a man.

It was not before the dessert that all of a sudden the very boy who turned a man appeared at the gate of Cristina's property, in front of the whole family. Not many words were uttered as it all happened instantly. He came up and stood before her. She got pale and fell down. He caught her before she hit the ground and held her defenceless body now turned white like the pearls hanging dead on her neck. She was not breathing.