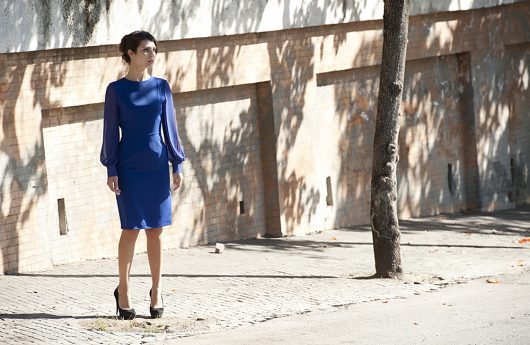 THE PRELUDE OF A CAPTIVATING STORY - Another weekend was coming for Ciriana, managing partner of a Rome subsidiary of a blue chip American consultancy. She was not a great fan of Friday evenings. Returning to an empty apartment from her top-floor office, with a breathtaking panoramic view of roofs and steeples of Roman churches, reminded her painfully of her solitude.

She did take advantage of being single for years, enjoying her freedom and flexibility, not allowing herself to reflect on failures with men. Until the day she got an email from Maurizio.

Ciriana was always full of passion and thirst for knowledge. Mentally agile and talented she was advancing her career dynamically and skillfully, maneuvering to avoid traps in a male-dominated business realm. It might have been her flair, but also her physique, that added to the royal aura of a strong and classy leader, even at times when she was just a young graduate.

Her sophisticated style and elegance impressed people she was dealing with. She had embraced her family trademark, which had been passed through generations within a clan of affluent Florence landowners.

Ciriana remembered her grandfather, a respectful pediatrician who married an heiress of one of the most innovative and entrepreneurial pharmacies of the times. Until the end of their lives in their 80’s, they would attract attention from their neighbours, whilst strolling gracefully through the town’s streets. The grandfather, wearing a tailor-made suit, a snow white shirt and a pair of hand made leather shoes, would be leading his wife, who had the appearance of a local version of Sofia Loren. In a toned colour skirt suit, kitten-heeled stilettos, with a tiny handbag, and her hair always carefully styled. Their age had always been unrecognisable, as if shrouded in mystery.

Likewise, her parents, both respected orthopedists, remained faithful to the imprints of their family’s core style and values. Her mother had once said to Ciriana: “It is not you who should compromise herself to fit others. Let them aspire to your class.”

From todays perspective it wasn’t easy to agree that this learning helped the young woman to build a happy life. There might have been a few men who had attempted to reach for her heart, but there had been many who had never even tried. A traditional approach to a woman’s role as mother and housewife still prevailed as a cultural pattern of the Italian family. Only Maurizio accepted her fully, and was up to the level that they both aspired to.

They both liked to present themselves as young, bold, beautiful and classy. Even during the times when they both earned scholarships at the New York University and left Florence to study overseas. Their families strategically sent them limited financial resources in order to keep them away from the risks involved in affluent living in an unfamiliar place. Nevertheless, the couple quickly became notorious for being obscenely… chic.

Ciriana loved the way Maurizio looked at her. When instead of wearing popular, yet expensive super trendy skinny jeans, she preferred simple black dresses synchronizing perfectly with her olive skin. High heels, complimenting the look, accentuated her long legs, and a pair of her grandmother’s pearl earrings was her only accessory. Maurizio cherished his love of well-cut shirts, and perfectly clean leather shoes. Never, not even in casual social situations, did he present himself in a careless or untidy manner.

Indeed, they felt like vain young gods encountering glances and hearing whispers throughout the campus. They loved the impact they had on fellow students arduously trying to copy their style, especially when it was so effortless for them.

It is hard to believe what happened to the couple in the following years. Time etched away all traces of Maurizio in Ciriana’s life. Only one visible line of the unopened email brought memories back. It said: “I dream to see you in your granny’s pearls again.”