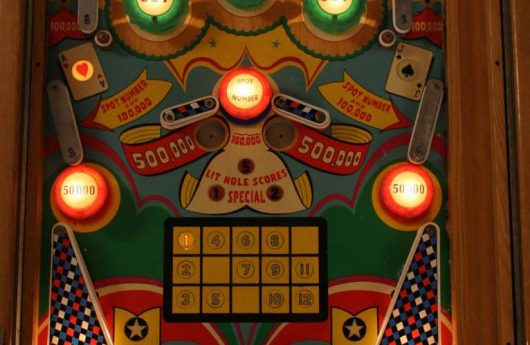 THE REDEMPTION OF THE PINBALL MACHINE Once considered a source of evil and a symbol of youth rebellion, it is now seen as innocent as a game that can be compared to the blood, drugs and sex you find in today’s video games

Do you miss the old pinball machine? Do you remember that wonderful clicking and clacking sound, all those colourful blinking lights and the joy of getting an extra ball? Not long ago, pinball machines seemed to be everywhere, now they have all but disappeared from pubs, bars and game arcades.

There was actually a time when pinball was a symbol of youth and rebellion as it was declared illegal by the American authorities. If you watch a movie or TV series that was either produced or takes place during the 1940s and 1950s, virtually any time pinball makes an appearance, it is for the purpose of portraying a young character who is a rebel. For example, the Fonz is regularly seen playing pinball in “Happy Days” episodes and in “The Simpsons”, Sideshow Bob once proclaims, “television has ruined more young minds than pinball and syphilis combined.”

Pinball was banned from the early 1940s to the mid-1970s in most of America’s big cities, including New York, Los Angeles and Chicago, where the game was born and where virtually all of its manufacturers have historically been located. The stated reason for the bans was that pinball was a game of chance, not skill, and so it was a form of gambling.

To be fair, pinball really did involve a lot less skill in the early years of the game, largely because the flipper wasn’t invented until 1947; five years after most of the bans were implemented. Up until then, players would bump and tilt the machines in order to sway the ball’s gravity. Many lawmakers also believed pinball to be a mafia-run racket and had a bad influence on youth. The machines robbed the “pockets of schoolchildren in the form of nickels and dimes given them as lunch money,” Fiorello La Guardia, the first New York Mayor of Italian background, wrote in a Supreme Court affidavit.

In 1976, the New York City pinball ban was overturned. The coin-operated amusement lobby (which represented the pinball industry) eventually succeeded in earning a City Council hearing to re-examine the long-standing ban. Their strategy was to prove that pinball was a game of skill, not chance, and thus should be legal. To do this, they decided to call in the best player they could find, a 26-year-old young man named Roger Sharpe. Fearful that this hearing might be their only shot at overturning the ban, the industry brought in two machines, one to serve as a backup in case any problems arose with the primary machine. Suspicious that the pinball players had rigged the primary machine, one particularly antagonistic councilman told them that he wanted them to use the backup. This presented a problem. While Sharpe was intimately familiar with the first-choice game, he had never played the backup and as he played the game, surrounded by a huddle of journalists, cameras and councilmen, he did little to impress City Council’s anti-pinball coalition. So he tried a make or brake final shot. He pulled back the plunger to launch a new ball, pointed at the middle lane at the top of the playing field, and boldly stated that, based only on his skill, he would get the ball to land through that middle lane. He let go of the plunger and it did what he said. Almost on the spot, the City Council voted to overturn the ban.

In the digital era, pinball machines have become collectors’ items but somehow they have managed to stand the test of time. One important development is the introduction of pinball simulations on home computers. Yet, while there are some good simulations, nothing beats the feel of having a full sized machine in front of you with real bells, buzzers and flippers.