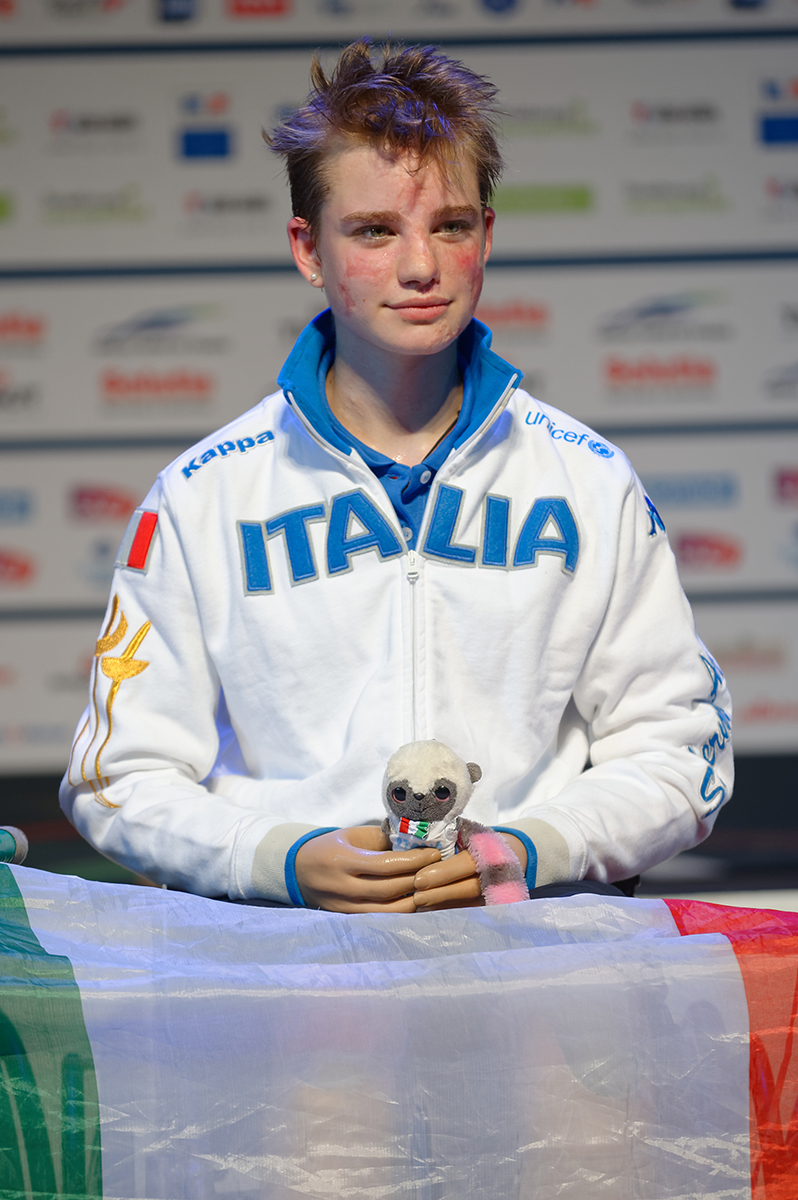 The incredible story of Bebe Vio: The girl with no arms and legs who rose to sports stardom

Beatrice “Bebe” Maria Vio, the most popular Italian wheelchair fencer, is a living example of how a terrible misfortune can be transformed into a glorious destiny.

Born in Venice and raised in Mogliano Veneto, she won the Gold Medal in the 2016 Paralympic Games based in Rio, by getting the winning score against the Chinese Zhou Jingjing: that was the climax of a long series slams and finally the event that brought her huge media attention.

At the age of eleven, Bebe contracted a severe meningitis that caused her the loss of both arms and legs and several face and body scars. After three months of intense rehabilitation and thanks to a prosthesis specifically designed for her, she could go back to the love of her life, fencing: a discipline she had been practicing since the age of five.

As she explained on national TV, soon after the end of the rehab she went straight to the prosthetic centre saying: “Do something, give me something, but I want to go back to practice fencing!” The professionals working at the centre told her about the possibility to do fencing on the wheelchair. Bebe replied: “Fencing in a wheelchair? Nooo, this is stuff for handicapped people, I don’t want it!” Later on, she humbly admitted how extremely ignorant she was about the Paralympic world and disability in general. Right from there her new life started its course.

“How could that be possible,” you may wonder, “to showcase such a genuine and undefeated grit?” not merely referring to her victories, but to the inner strength that accompanies every moment of her daily life. Fortune, or vocation, or innate skills, I leave you the choice.

No one, not even her own parents, believed she could go back to hold the foil with such agility. Well, all the credit belongs to Bebe, to her strength, optimism and spirit of competition, but also to the lead of her two coaches, Federica Berton and Alice Esposito, that pushed her in 2010 to take part in her first wheelchair fencing competition, becoming the first athlete in the world to pull fencing with prosthetic arms.

Despite her young age, many are the sports awards she has gained since that day. To name a few: the Under 20 Italian Championship in 2011, which became the Overall Title in the following two years; the double gold at the Strasbourg Europeans of 2014, both with the individual foil and team game; gold again in the same year at the Under 17 World Cup in Warsaw. More recently, Bebe scored another gold as individual at the 2015 World Championships in Eger, while at the games of Casale Monferrato, in 2016, she reconquered the European gold.

Nowadays, Bebe’s sports career has become emblematic of turning a severe impairment into a special gift and is probably what inspired her parents in creating a non-profit organisation. The “Art4sport Onlus” promotes sport for amputee young people and helps their efforts succeed.

Today, Bebe Vio gains and actions are not just limited to sport. A great commitment has been put into many campaigns for vaccination against meningitis, which have seen her also posing for the Australian photographer Anne Geddes.

Another remarkable event was being part of the special guests added to the Italian government delegation who attended the last official dinner at the White House of the Obama administration. When she received the formal invitation, she thought to be a victim of “Scherzi a parte”, the Italian TV pranks series, making publicly fun of herself on Facebook.

What the audience love the most of this incredible girl is exactly her self-irony that makes everybody laughs anytime she opens her mouth and talks about herself: “Mom always told me that I could become anything in life... so I decided to be a selfie stick!” - That is the statement that she posted on Facebook a few months ago, while publishing a selfie using her right prosthesis. Needless to say, in just a few hours the “likes” and “shares” became thousands.

“Being special means to be able to make people understand that your weakness can be one of the things you can be proud of the most”.

In the end, citing Sir Edmund Hillary, “it’s not the mountain we conquer, but ourselves”, and so far, she seems to have achieved, widely, the top of herself.