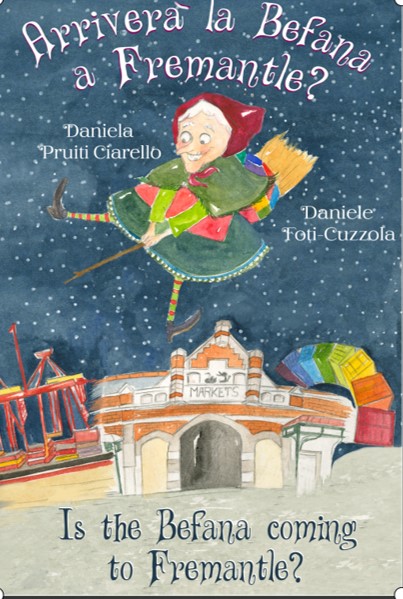 The Befana is invited to Christmas...Down Under

Young Sicilian boy, Antonio, has recently moved to Fremantle with his family. Realising that Christmas and the Epiphany will be celebrated very differently in Australia, he struggles to let go of his Italian traditions. With the help from his friends, Antonio sets about embracing new Australian traditions with an Italian twist. Little does Antonio know that the Befana has a little trip of her own planned…

Published just in time for Christmas, the book, which took almost four years to realise, is a joint venture by the two creatives, backed and supported by City of Fremantle and the Italian Consulate of Perth. ‘When these two organisations said they wanted to support us that was some validation that we were working on something special,’ Daniele says. Further supported by Professor John Kinder from The University of Western Australia, the launch event was a huge success, with all copies selling out. Their journey to date, Daniele tells me, ‘has been a real labour of love,’ and they couldn't be happier.

The initial idea for the book came to Daniele while working as an Italian teacher. ‘I found resources were lacking, and we didn't have anything that celebrated our unique Italian-Australian culture. A lot of the books were fairy tales or fables or set in Italy, and considering the majority of my primary school students had never travelled to Italy, I found few of them could relate to the stories we were reading in class,’ he explains. Noting the disconnect between his learners and experiences of Italian Christmas, he sought to bridge the gap between exciting folklore and inter-cultural knowledge.

The Christmas Witch, or La Befana, is a uniquely Italian tradition which Daniele wanted to make as accessible as possible for all readers; both Italian and non-Italian. The story of La Befana left a remarkable impression on Daniele as a child, and his early experiences in Italy afforded him wonderful memories of family celebrations, something he has brought back to Australia to celebrate with loved ones.

A case of life imitating art, Daniele acknowledges that the story he has written is very much a retelling of aspects of his own life. ‘I was born here in Australia but had a very traditional Italian upbringing, and have spent a lot of time in Italy. I'm very attached to the traditions and holidays my family celebrate in Italy, and I try to replicate as much as I can here in Australia. My Italian friends and family are always fascinated that we spend our Christmas by the beach, and while I used to feel sad that we couldn't exactly replicate things, I realised there is still something unique about what we do have here. The fusion of both Italian and Australian traditions is beautiful in its own way.’

Fremantle was deliberately chosen as the narrative’s setting, given its rich Italian identity and historical importance, having once been an arrival port for many Italian migrants. Fremantle also has special connections for Daniele’s family, as it’s the Sister City of Capo d’Orlando, located in the Sicilian Province of Messina, where his family has a home.

Daniele tells me that the process of conceiving the book in bilingual form was layered and time-consuming. Negotiating challenges around language accessibility, he wanted Arriverà la Befana a Fremantle? to be used as an inclusive language learning tool for speakers of both English and Italian, in Australia and overseas. The bilingual structure avails the book to a plethora of readers, both here and overseas.


Daniele first met illustrator Daniela a few years ago. They got talking about Daniele’s book idea, and immediately a collaboration was formed. ‘While I'm the author and Daniela’s the illustrator, we both gave input on both text and images. I also wanted it to be her story as much as mine,’ Daniele says.

Daniela’s approach to illustrating the book drew primarily upon her childhood memories of celebrating Christmas and the Epiphany as a young girl in Italy. She tells me all about how the Befana’s arrival was a much-anticipated event in Castell’Umberto, where she grew up, recalling the community spirit, and the receiving of small gifts from La Befana. Daniela also found inspiration observing students at school where she teaches Italian. Enjoying long walks through Fremantle, Daniela sought to imagine how the young characters would feel on the real-life streets, dreaming and wondering about the arrival of the Befana.

Arriverà la Befana a Fremantle? invites readers on a journey of cultural discovery, with a sprinkling of seasonal Italian magic. Be sure to be on your best behaviour… this year the Befana has her passport packed.