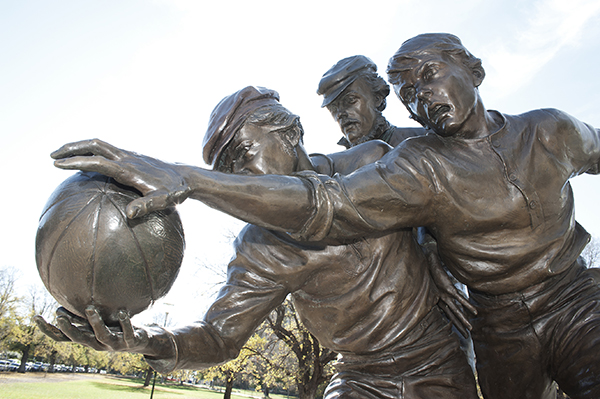 Tracing back the origin of Australian Rules Football

The origin of Australian Rules Football has inspired many books, articles and much historical research. This in itself gives us a clue as to how important this game is to so many Australians.

Anyone who drives along Punt Road or spends time around the city of Melbourne on a Friday night, or Saturday afternoon, cannot deny the great popularity of this game.  Let alone anyone who watches TV during the football season, (Autumn and Winter).

It is only when something is so popular and so prominent in a society that we become interested in how it all began. With Australian Rules, the focus is always on how such an original game came into being, given that much of who we are derives from other cultures or civilisations.  How did Australian Rules Football get created and why?  The following sources give us some clues.

The First Australians are said to have contributed to the development of Australian Rules Football. There are accounts of Australian aboriginals throughout Victoria playing a game called Marn Grook, (Gunditjmara language for game ball).  This game featured an oblong ball made of possum skin, slightly spongy, and included high jumps to catch the ball, a large side of players, and long kicks of the ball over long distances.  Sound familiar? Players were also divided into teams that often had totems as a team symbol (cockatoo, crow, eagle).  Kristin Otto in her history of the Yarra River states that Marn Grook was probably played on the same site as the Melbourne Cricket Ground (MCG), home to current football matches, as it is on the site of the Woiwurrung meeting and corroboree ground.

For anthropologists the landscape, weather and geological timeline (e.g. pre or post-industrial revolution) significantly influence the development or evolvement of a human social practice.  In this case, large, flat and clear tracts of land around the early settlements of Melbourne, provided by the Yarra River flats, can be said to contribute to the origins of Australian Football.  They enabled a game to be played across a wide space in a fluid, fast pace, rather than fixed manner; and quick growing grass in all seasons plus a temperate climate, provided a ready pitch and opportunities for outdoor games most of the year.  Given that the ground was often hard, players kept the ball off the ground, preferring to run with it and throw or kick it to each other, and opted for games that involved less tackling and throwing of players to the ground in opposition to English rugby.

Europeans naturally brought their own traditions of sport and games with balls.  Many of these, in particular, English rugby football and Gaelic football (caid) were played in varying forms throughout the early 1800’s in various settlements across Australia.  The knowledge and understanding of a game with rules, played with a ball and against opposing sides was present as soon as Europeans were.

In Melbourne 1859, the first formal rules for an Australian Football match were written down and agreed upon. The aim was to create a game that could be played during winter, (when the cricket season was finished, taking into account the physical environment, and drawing from games that were already being played informally across the country) by both indigenous Australians and new Australians. A hand written copy of these rules still exists: published and widely distributed at the time.  A man by the name of Tom Wills, credited as being the ‘father of Australian Rules Football’, was the convenor of this meeting.  He was the Chairman of the Melbourne Cricket Club and a renowned cricketer.  Present at this meeting were journalists and several other men who were interested in introducing a game, with clear and agreed upon rules that could be played in Australian schools.

Another man named H.C.A Harrison (also known as the ‘father of Australian rules Football’ due to his significant contribution in managing the game), established and formed the first five teams from the early days, making up the Victorian Football Association (VFA) in 1877.  H.C.A. Harrison was the Vice Chairman of the VFA, the inaugural Chairman of the Victorian Football League (VFL) formed in 1897, and active in the Melbourne Football Club for many decades.

The Victorian Football Association (VFA) was established primarily as an administrative function, to resolve disputes, reinforce rules, and to facilitate inter colony matches, as each Australian state or territory was ruled independently before Federation in 1901.  Prior to the establishment of the VFA, the Secretaries from each club would meet at the beginning of each year to plan games.  The VFA began with five clubs and by 1897 had sixteen established clubs all over Victoria.  The VFL began its life when the eight strongest clubs of the VFA broke away to form a more professional association – Carlton, Collingwood, Essendon, Fitzroy, Geelong, Melbourne, St Kilda and South Melbourne were the founding clubs.  Over the next twenty-eight years they were joined by Richmond, Footscray, North Melbourne and Hawthorn.  These twelve teams then remained unchanged for fifty-seven years.

Until the mid-1980’s, players lived and worked in the suburbs their team represented, and therefore mingled with local residents.  The players in your local team that you saw every Saturday were often your car mechanic, your shop keeper or your children’s teacher.  My grandfather lived and worked in Essendon and he and my father and his brother were and still are avid Essendon supporters.  My father went to school with some of the players - he and his brother went to the matches each week at the Essendon football ground, and de-briefed after the game at the pub with the players.  My grandfather’s newsagency became the place where stories from the match that week were swapped and embellished, often with the players themselves involved or in ear shot.

My grandfather and my dad attended matches until they were too old and frail to make it to the stadium, and then they watched them on TV.  My uncle played for Essendon as a young man and became Vice President of the Essendon football club, contributing greatly to its refurbishment and upkeep.  His grandson currently plays football for Essendon in the ‘little league’, the club for under 18’s. Barracking for Essendon is our family tradition passed down generation to generation even though they are now three since any of us lived there. When I arrived back in Melbourne with my Italian husband, one of the first conversations my father and uncle had with him was his ‘choice’ of football team.  There was none.

Similar with most people in Melbourne, my father and uncle moved from the suburb in which they grew up.  This became problematic for many of the clubs as their membership bases eroded and they became financially weak and unsustainable.  The chaos theory suggests however, that this entropy led to a re-flourishing in a different form for the VFL, which became the Australian Football League (AFL), as clubs were privately bought and moved interstate.  This supported the most recent version of the game that we see today, of clubs from all over Australia coming to play and compete in Aussie rules.  Although the origins of our game may be unclear and disputed at times (indigenous, Gaelic, English, European) one thing that is never in dispute is that it is ‘our’ game, evolving and changing but unique and distinctly ‘us’.