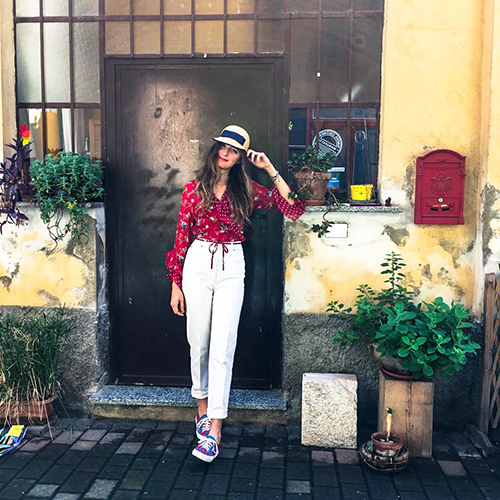 Shopping and eating in Isola, Milan

If Rome has Testaccio, Milan has Isola. Both are areas that have been subject to renewed urban interest, and both have the atmosphere of a village where creatives and locals live side by side.

Isola takes its name from the agricultural isole or farmholdings that used to occupy the area. It’s appropriate for a neighbourhood where when the Garibaldi train station was built in the 19th century, Isola (which also means island) was effectively cut off from the rest of Milan by the train tracks and linked to the rest of the city by a bridge.

Urban landscaping of the Garibaldi station and ex Varesine areas over recent years have changed Milan’s skyline and injected new energy into the area. The Porta Nuova skyscrapers just over the train tracks form an impressive background for vibrant street art and the traditional case di ringhiera or popular housing consisting of blocks of flats characterised by a shared balcony that runs along each floor. Over recent years it has become popular with creatives and young families who have chosen to live here and has developed an alternative vibe that mixes with the local feel.

Ambroeus (www.ambroeusmilano.it) sells vintage and second hand clothing. Even though there are specialised vintage shops that have been around for years in Milan, the second hand scene is slightly less familiar to the Milanese but shop owners Giorgia, Ettora and Massimo have already ensured a large following. Follow their Instagram account (@ambroeus.milano) for their daily look. For more vintage, head to Live in Vintage (www.liveinvintagemilano.com). Also go to Le Vintage for new items with a distinct retro feel. Look out for their Le Solferine shoes (www.lesolferine.com) designed by owner Silvia Berolaja. If you love jewellery, you have to go to international jewellery designer and photographer Monica Castiglioni whose creations are architectural masterpieces. This is her Milan shop. The other is in New York, the other city from which she takes inspiration, particularly in her photography.

And finally, don’t forget Isola market where you can stock up on some Italian food goodies while you’re there or just generally enjoy the atmosphere.  Market days are Tuesday 7am-2pm and Saturday 7am to 5pm.

Ache (www.anche.it), translated as also, is a bar, restaurant and baker’s all rolled into one. Head there for your morning cappuccino and brioche, and keep in mind that the baker’s stays open till 4.30 in the morning so if you’re still hungry after a night out, you know where to head. And seeing as though we are in Milan, you should go for an aperitivo. It’s a Milanese tradition of drinks with snacks, and you may find you end up skipping dinner altogether. Try Frida (www.fridaisola.it). Their courtyard is very popular during the warmer months, and they also hold various markets. For a taste of home, check out Australian brand Deus ex Machina for surfboards, motorbikes and bicycles, and their Deus Café (www.deuscustoms.com/cafes/milan). For jazz, Blue Note Café is the only European venue of historic New York jazz club Blue Note.