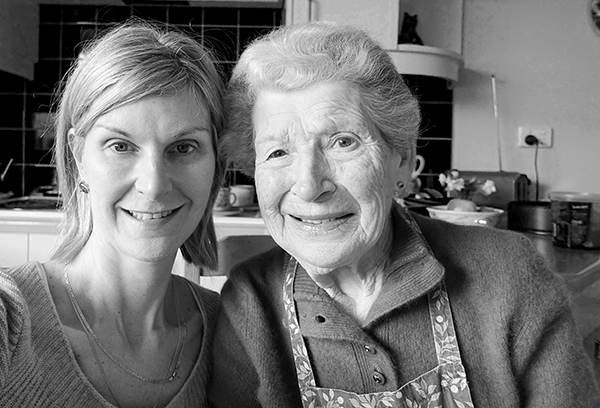 Paola Bacchia: she learnt it all from her mamma

She told me that she was tall. Very tall. I spotted her arrive from across the bar and from over the top of the coffee machine. She was indeed tall, but also very elegant and refined.

I was giddy inside, experiencing butterflies of a different kind – not the romantic sort, but rather what I can only describe as ‘fan-girl’ jitters. Paola Bacchia had arrived and I simply couldn’t contain myself.

In preparation for this catch-up I re-read (seemingly for the 50th time) both of Paola’s books, ‘Italian Street Food’ and the recently published ‘Adriatico’ (Smith Street Books), in the hope that their whimsical and dreamy Italian food-filled pages would inspire something of a poet in me, and that I might dazzle her with insightful questions about her work, travels and aspirations. In actual fact, all they did was make me hungry. Hungry and nervous! Paola sat across from me with such grace and confidence; it was hard not to get wrapped up in her life and journey as she spoke. She knocked back her macchiato in two sips and I was hooked.

Paola is the beating heart behind not only the two aforementioned Italian cookbooks, but also the @italyonmymind Instagram feed and blog. She is a passionate foodie with a lot of love, inspiration and joy to share. Paola’s family roots, which I will come to in a moment, are the driving current that underpin her work and motivate her to create and inspire other apron-clad home cooks. Though she has had no formal cooking training, she has learned all that she knows from watching her beautiful mamma in the kitchen. Livia, 91, features regularly on Paola’s social media feed, and her timeless recipes adorn the glorious pages of her cookbooks. “I trained with my mother,” she says. “Mum had one recipe book, Il tesoretto della cucina which her brother, Fide, brought out from Italy in 1953.” As she speaks of the relationship with her mother, she becomes very impassioned. She adores her mother beyond words and is making the most of the sweet moments they share together.

Paola lost her beloved father, Nello in 2012. “Dad was 70 when he retired”, she shares, explaining how Nello had always worked hard to support his family and provide for them. Recounting the story of how her parents met lights up her face, and she animatedly explains that it all went down in Monfalcone, a little town not too far from Trieste. Livia’s parents owned three bars in town, and her photo, which graced the local photographer’s shop window, caught the attention of 26 year old Nello. He popped in to share a coffee with his father – he saw her and he was smitten. Their first unofficial date was at the local cinema, where he had followed her one day and sat down next to her.  Nello planted a big kiss on Livia’s cheek, and she promptly ran out to go home and wash her face. Her feelings for him quickly changed and not long after they were married.

The aftermath of World War II set into motion a chain of events that forced Nello and Livia to make some critical decisions about their future in Italy. Nello had lost his home, and Pola, his native Istrian town had changed significantly, both geographically and culturally. He wanted more for their children than post-WWII Italy could offer, so he chose a free migration passage to Australia in exchange for two years of work. This exchange sounded like a good idea as it also allowed Nello to see more of the world.

Sadly, like so many other migrants, they found their initial time in Australia very difficult. Nello and Livia eventually settled in once they sponsored her brothers to come out, forming their own little community. They returned to Italy, however, in 1970 to visit family, with Paola’s older sister, Barbara staying on. Paola returned to Australia with her parents only to help them sell their home in Melbourne’s Box Hill South and migrate back to Monfalcone. “I was la cangurra!” Paola laughs. “I spoke dialect and was so very tall!” She may not have fit in right away, but she certainly left a piece of her heart in Italy. Their time was short-lived, returning to Australia in 1972 where they remained and set down permanent roots. Throughout it all, the to-ing and fro-ing, there remained one constant in their lives: good food and the traditions and passion that come with it.

One word that comes to mind when I reflect upon her extensive body of work is ‘integrity’. Paola is exceptionally particular about the research that goes into her books and travel adventures. This fact is plainly clear as she explains in intricate detail the history of the Istrian peninsular and shifting borders along the Adriatic. But beyond the formal publishing work she does, she puts the same care and attention into her cooking classes. Paola feels most comfortable welcoming students into her own home. “It’s more intimate. It’s my own kitchen, not some commercial space,” she explains. Students get a real hands-on experience under Paola’s guidance, making and tasting a variety of pasta dishes, sauces and sweets.

Sharing her love for Italian food brings Paola great joy. In recent years she has been extending this love across the continents, running food and cooking tours in Italy. Sicily in 2016 and 2017, Trieste in 2018 and in 2019 it’s Trieste and Puglia. “Pugliese food is my preferred style of cooking,” she tells me. “I love Puglia. I love the simplicity and the people are genuine.”

On her blog Paola has a very beautiful black and white photo of her parents taken on the day they announced Livia was expecting Paola’s big sister. It’s symbolic of the love her parents shared, her family’s journey, and how she connects with their stories and traditions. So where will this inspiration take Paola next? She already has a few coals crackling away on the fire – afterall, there’s nothing that she can’t do… or cook, for that matter!

Here’s to you, Paola! Cin cin! I’ll be waiting…with fork in hand.