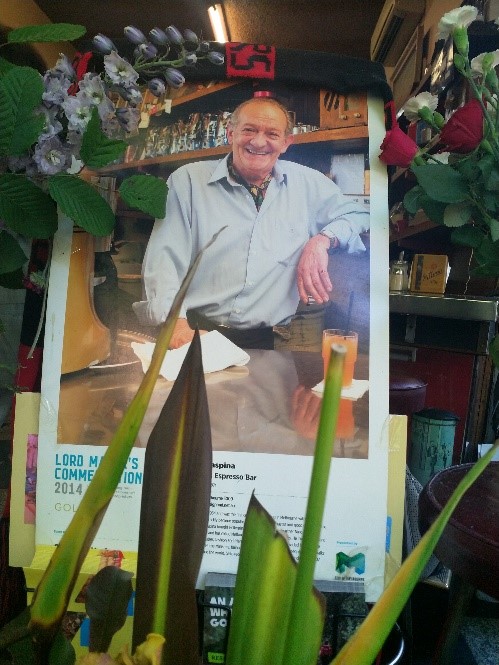 A tribute to Sisto Malaspina

A life taken during a random act of terror, Melbourne icon Sisto Malaspina was cruelly ripped away from the breathing fabric of the city in the recent Bourke Street attack on 9 November, 2018, as he generously offered his help during the commotion – only to be fatally stabbed instead.

The much loved and respected 74-year-old Italian restaurateur and co-owner of Pellegrini’s espresso bar, located in the vicinity of the scene of the crime, had run the establishment originally set up by Pellegrini brothers Leo and Valdo in 1954, for decades and is forever present in the hearts of those who remember him, his important contribution to local history and culture, and his warm smile as he greeted customers, telling anecdotes as he went along.

A native from Le Marche, Malastina arrived in Melbourne in the early 60s and took over Pellegrini’s – an increasingly popular Italian establishment – in 1974, running the bar with co-owner Nino Pangrazio. Melbourne was at that stage positively influenced by several waves of Italian settlers promoting their culture in suburbs like Carlton and Preston, and most definitely the Pellegrini’s part of Bourke Street which was a hub not only for Italian locals with an appreciation for simple but authentic Italian signature dishes, and the homely and accommodating feel to the bar, but also for a mixed nationality clientele who made Pellegrini’s their regular hangout.

Malaspina embodied the very essence and goodness of Italian style and values: cultural sophistication in simplicity, human kindness and generosity, narrative abilities, and appreciation of the family as a unit – in this case Sisto’s additional family was very much Pellegrini’s clientele and the staff who made - and keep making – it such a special place. Nino, who knew Sisto for 56 years and who kindly shares a few words with me inside the bar on the busy morning of 19 November, first met his friend when they were working together at a reception room at Inkerman Street in St Kilda. Nino says that for a long time the two were “conjoined at the hips” and summarises Sisto’s personality as follows: “Happy, outgoing, complete love of life, fantastic with the customers, a lovely family man, he’s got beautiful children, his wife, the whole lot.“

Sisto indeed made his clients feel as if they were part of one big family. Often referred to as “the heart and soul of Bourke Street”, he is remembered by renowned Melbourne writer Arnold Zable who in his heartfelt tribute to the Italian the day after his death writes that “Sisto loved people, and I was one of the thousands who loved him”.

Friends, family, Melbournians, foreigners – we all remember Malaspina for his unobtrusive, friendly and charismatic manner behind and in front of the counter, for dedicatedly upholding a daily morning routine of sipping long blacks at the bar, and for his seemingly effortless ability to create a friendly and easy vibe and atmosphere in the venue as he greeted customers from all walks of life; young and old, foreigners and locals, workers and parliamentarians – with the 70s defined by Pellegrini’s receiving regular visits from politicians from the Spring Street Parliament buildings just up the road, in need of a caffeine kick and a friendly chat before commencing their busy days. As summarised in a recent article in Il Globo, “Pellegrini’s started out as a coffee bar which aimed to satisfy the needs of the growing Italian community in the 1950s but, by the 1970s, it had become a favourite among intellectuals and arty types… and the politicians of Spring Street, of course.”  And in Nino’s words, “Pellegrini’s was the first Italian espresso bar on the market. Pellegrini’s put coffee on the market in Melbourne and also in Australia.”

As I revisit Pellegrini’s in the warm evening of 18 November it is business as usual although the atmosphere inside the bar is one of pensive reflection; not sombre, but pensive. Customers are enjoying their artisan plates of pasta in comparable silence and the only three waiters serving customers behind the counter this evening carry out their tasks in a low-key manner, not saying much but looking at ease. Beautiful and colourful bouquets of flowers are placed inside the window and the bar, Sisto looks back at us from photographs and his spirit is very much still alive and present. A decorative bread at the back reads SISTO in big letters. Young waiter Dominic serves me an espresso, then another one, and is happy to let me take his picture. “Come back tomorrow morning”, he says, to talk to Nino. That I do. On the day before the State Funeral in St Patrick’s Cathedral on 20 November – simultaneously broadcast live-stream on screens on Federation Square to crowds all paying their respect to an icon who represented an Italian institution and good, human values – his dear friend Nino (who during our interview is approached by individuals entering the bar, personally paying their condolences) expresses his gratitude to all: “I cannot say enough about the outpour of love and grief that we’ve had over the last week” … not only in Melbourne but in “Victoria, Australia, the whole of the world. Phone calls from Italy, America, Canada, New Zealand; all over, cards, letters, everything, it’s been amazing.”

Nino, very accommodating, a warm and gentle man with a calm and steady voice and the ability to share at a time that is personally devastating for him, shows us what really matters: strength in adversity, undying love, respect and deep admiration for a man who meant so much to so many. Sisto himself gone, the memories of this great individual live on, as does his spirit and a light that keeps shining bright: inside Pellegrini’s, on the streets of Melbourne, and in the world at large.

That same evening I come home and make myself a plate of spaghetti bolognese –  in honour of Sisto and all the good things in life.

Jytte Holmqvist is a movie enthusiast with a doctorate in Screen and Media Culture from the University of Melbourne and a keen interest in contemporary Spanish and Italian culture. She has established a publishing record and presented at conferences nationally and abroad. Her interest in Italian film began in earnest at the University of Auckland when in the paper Italy on Screen she explored films by Fellini, Rossellini, De Sica, the Taviani brothers, and Pasolini - to mention but a few. With that grew a love for Italian cinema and the fascinating world that it opens up to the viewer.

THE TRANSCULTURAL VERSATILITY OF THE MANDOLIN