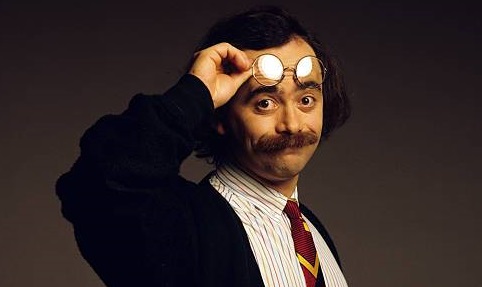 Maurizio Nichetti is one of the most gifted and daring screenwriters, actors, and directors to emerge with the low-budget comedy Ratataplan in 1979. Segmento explores Nichetti’s innovative contribution to film-making.

Nichetti began his film career almost by accident. In dire straits, he applied for a job as an actor for a commercial. The agency he approached was owned by none other than Bruno Bozzetto, who is known as one of the most prolific, imaginative and cutting-edge animators the world has ever seen, a man revered by creative giants at Pixar Studios.

According to Nichetti, he didn’t believe he had a chance of gaining employment but, as fate would have it, he walked into Bozzetto’s agency on the very day their only writer suddenly decided to quit. What are the odds? The agency was full of stylish models hoping to pitch for a part in a movie or TV commercial. People darted everywhere in the building, calling out to each other across rooms, holding meetings striding down corridors—a hectic, suspenseful atmosphere. He got a sense that something incredible was about to happen from the first moment.

Not only had Nichetti set the foundation for a friendship with Bozzetto that has lasted to this day, he also landed the chance of a lifetime to be part of one of the most significant animations ever produced, Allegro non troppo (1976). It marked Nichetti’s first foray as a writer and actor in a surrealist film that would influence his own career, if not the Italian film industry.

Nichetti’s creative output in film has been celebrated for drawing on an array of surreal and eclectic techniques, almost re-inventing the Italian cinema through state-of-the-art technologies, borrowing directly from TV ads, and for adopting silent film acting methods—not surprisingly Nichetti is also a mime artist! Indeed, for the latter Nichetti has said that his inspirations were American comedians Buster Keaton, Stan Laurel and Oliver Hardy. Like Keaton, Nichetti is anachronistically energetic in his body movements and superbly nuanced with his facial expressions.

With Ladri di saponette (The icicle thieves, 1989) Nichetti experimented with a dichromatic film technique, a process involving the direct application of colour to black-and-white film. Computer generated imagery (CGI) was still in its adolescent phase at the time, and so the process for Nichetti’s film was carried out by hand, frame-by-frame. Admittedly, this was not a new technique, but it was captivating.  Perhaps the best-known example of this technique is Steven Spielberg’s black-and-white holocaust drama Schindler’s List (1993), in which we see a little girl in a red dress being led into a concentration camp. We finally learn of her fate when we see the red dress, sans the little girl, atop a pile of clothes. The red standing out in the black and white film through the use of CGI. It should be noted, however, that Spielberg’s film was released four years after Ladri di saponette.

‍Ladri di saponette also takes on other modernist techniques to become "metacinema" — that is, ways in which certain films unexpectedly remind audiences that they are watching a movie. Nicholetti’s film, for example, references Italy’s filmic past in that it parodies neo-realism (the title is an obvious take on Vittorio De Sica’s 1948 film Ladri di biciclette). More to the point, though, the film adopts modes of acting reminiscent of the theatre of Luigi Pirandello, Bertolt Brecht and Samuel Beckett, in which actors drop their façades as characters. They either directly address the audience or give hints that they are aware of being actors in a play.

Volere Volare (To Want to Fly,1991) is probably Nichetti’s best known film worldwide. A romantic comedy that blends live-action footage and animation, which has characterised much of his creative output since Allegro non troppo.

Again, the technique was not new, but it was creative (for instance, in Australia, the Yoram Gross Studios was hugely successful from the late 1970swith a series of live-action and animated theatrical feature films, starting with Dot and the Kangaroo in 1977 and concluding with Blinky Bill’s White Christmas in 2005).

Even so, by the time Nichetti came to make Volere Volare, commercial feature-length films that mixed live-action with animation were a rarity. Such productions were still predominantly short-length, infrequent, specialist works of political allegory and social satire. Nichetti did not pioneer the technique, but his film may have given audiences a degree of self-reference not seen inanimation since the Bugs Bunny and Daffy Duck cartoons from the Warner Bros. Looney Tunes series in the 1950s.

For Volere Volare Nichetti created the marvelously quirky Maurizio Sbaffino, a character who works as a voice and sound effects artist for American cartoons. The plot has Sbaffino fall in love with a woman who is obviously, totally unsuited for him. But what happens from the moment they first meet is that Sbaffino literally starts to turn into a cartoon version of his live-action self. In doing so, Nichetti takes the formal and plastic possibilities of film to a new level -for what is obviously impossible live-action is made possible in a self-reflexive blend with animation.

Nichetti was at his most experimental in television in the mid-1980s when he wrote, co-directed and hosted the Italian variety shows Quovadiz (1984–85) and Pista! (1986–87).In both he used the studio stage as a canvas for experimental art. His formats went way beyond what was customarily allowed for TV variety shows, or what audiences expected. He played with split screens, animation, colour, and exploited newly developed special effects, such as the blue screen, to burst through the limitations of broadcast television. For instance, for one show you might see Nichetti seemingly float mid-air, or as a startling giant version of himself.

In another, his guests would appear as segmented body parts—an arm here, a head there, a torso somewhere else—and with Nichetti moving them from one screen to another as though he was trying to solve a jigsaw puzzle. The television studio became the stage for experimental art, and it seems that kind of television is unmatched today.

The techniques Maurizio Nichetti exploited in both film and television may appear quaint by today’s standards. Yet one cannot deny his place in history as an innovator, exploring cinematic forms blurring conceptual distinctions between live-action and animation, main stream and experimental practices, life and art.