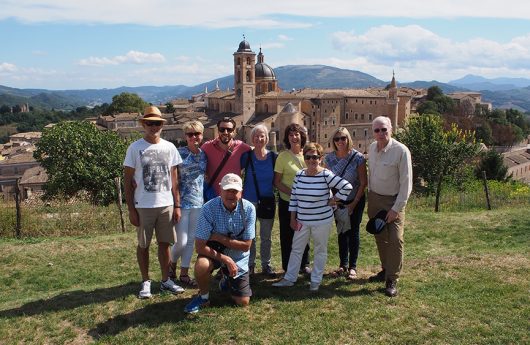 Sallie had previously visited Italy years before, and stood in front of Michelangelo’s David just enough to admire its stunning beauty before rushing to other must-sees Florence had to offer. She couldn’t imagine that her next trip to Italy, in September 2016, would have brought her there again at the statue’s feet to stay longer, captivated by the contagious passion her new guide, Mario, transmitted her, together with copious amounts of historic and artistic details she had ignored.

Mario Vitellone, the guide in question, is a Melbourne-based tour operator who organises – with his wife Viny and with their son Gianni — personally guided and small group tours of Italy. Vita Italian Tours, together with their other family business Pronto Travel, has just recently celebrated the opening of a new office at 1/25 Little Oxford Street, in Collingwood, Melbourne.

Sallie was a member of a group of eight Australians who took part in a trip to Italy organised for them by Vita Italian Tours. To guide and assist them there wasn’t just Mario, but also his wife and son; a whole family of tour operators committed to making this trip an unforgettable one. And so it was.

Sallie and two other members of the group, Vicki and Shirley, were happy to share with us some of the most beautiful moments of their experience.

After seeing Michelangelo’s David, the group went off the beaten track to reach Gubbio, a medieval town in the northeastern part of the province of Perugia.

“We were invited to take a ride up to Mt. Ingino – recounts Sally – where the majestic Basilica of St. Ubaldo is located, via a cable car, actually a cross between a bucket and a Birdcage that would properly fit one person, though it fitted two. Waiting for us at the top was a long table set for lunch, overlooking a stunning panorama of terracotta roofs, popping up like mushrooms between scrubby mountains and olive tree plantations.”

Sitting at that table and consuming a great variety of different plates, Sallie also had a chance to build long-lasting bonds with her travel companions. She couldn’t help but notice and laugh at the ironical jibes between Mario and his son Gianni, reminding her so much of her relationship with her daughter. A sense of deep familiarity suddenly hit her. It felt like home.

For Vicki, if she were alone, she would have probably wandered around aimlessly, without taking much care of the century old cobblestone pavements or the countless hidden backstreets of Assisi, the birthplace of St. Francis. Viny winked at her, and soon Vicky understood that something special was about to happen.

The group turned into a narrow alley, walking in the penumbra as souls in Purgatory waiting for the Divine Light. And then it came, in the form of a sunny terrace that made Vicki rub her eyes. The dazzling blue of the sky was perfectly shaping the hills and the trees scattered in the horizon, and while the group members were ecstatically gazing at the multiple shades of green of the Italian countryside, a vivacious bell rang. It was Gianni, the gorgeous young guide, who announced impatiently: “Aperitivo’s time!”

The charming proprietor of the terrace bar arrived with a tray loaded with iced Aparol Spritz, finally bringing them a fresh twist in the late summer heat.

If it weren’t for the Vitellones, Vicki would have perpetuated, as many other fellow citizens, the mistake to solely associate Italy with Tuscany, ignoring the beauty of the other regions. Without her tour leaders, she wouldn’t have visited the astonishing Urbania, a town 100 km north from Assisi, in Le Marche region. Nor experienced the soporific atmosphere that wraps the town after lunch, when all the locals shelter in their homes for an afternoon nap, like a breeze of peace in an unknown corner of paradise.

In that early afternoon and realising to be the only travellers around, Vicki felt so accomplished and content that the idea to head back to the overcrowded Florence scared her for a while. But there again, as if reading her mind, Viny appeared like an angel, and softly tapping her shoulder, moved Vicki’s attention to the shining windows of the local botteghe displaying traditional Maiolica ceramics, a craft dating back the 16th century. So much beauty to contemplate and no queue at all!

For Shirley, it was an Autumn day, and still the temperatures were quite warm, causing the sun rays to reflect like a mirror on the calm waters of Garda Lake. A last gaze at that soothing scenery, before embarking the minivan that would take the group to the Dolomites, a unique mountain range in northeastern Italy, since 2009 a UNESCO World Heritage Site. Shirley was tingling with excitement for the new destination, memories flooding back in her mind of her previous journeys to Italy. Travelling with Mario, Viny and Gianni had been the right choice. She got to know another Italy, away from the masses of tourists and she even started speaking the language!

At a leisure pace, Mario and Gianni drove the small group through alpine villages along the Grande Strada delle Dolomiti (the big Road of the Dolomites), stopping now and then to admire the spectacular scenery this region can offer.

By the time the van reached the top, the magic happened: the first snowflakes fell down from the sky, completely unseasonal and unexpected, as a gift from heaven. That was the first time Shirely saw and felt snow on her skin, hair and fingers. Something she will never forget for the rest of her life.