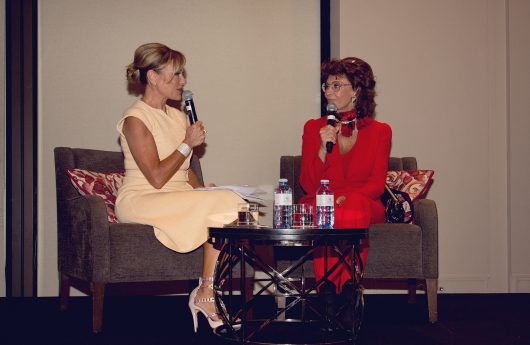 Sophia Loren’s visit to Melbourne as a special guest of “La Dolce Italia” Gala Charity Dinner to raise funds for the Alannah & Madeline Foundation, was but a flickering moment in the long and impressive career of the most famous actress Italian cinema has ever produced.

She came, she saw and she won… the admiration of the lucky ones who could afford taking part in the gala event and quickly disappeared like a shooting star. She didn’t give any interview limiting herself to answer a few questions at a press conference where she arrived almost an hour after the scheduled time, wearing a red pant suit, stunning diamond earrings and the bearing of a noblewoman.

It’s a pity that what was realistically Sophia’s last visit to Australia has passed without leaving any meaningful trace of her spirit apart from her commendable support to the work of the Alannah & Madeline Foundation, an advocacy institution dedicated to protecting children from violence.

An ideal opportunity to let her reminisce about some of the most significant moments of her life both as a movie star and as a woman was lost. Yet Segmento is offering its readers an interview that never happened but it is nevertheless true because we have taken most of her answers from her autobiography “Yesterday, Today, Tomorrow:  My life as a fairy tale”, which was published last December and went unnoticed to most of the people she met in her short stay in Melbourne.

Sophia Loren was born from a passionate and stormy on-off relationship of her mother with a man called Riccardo Scicolone who came from an aristocratic family and refused to marry her. He gave his name to Sophia who had to pay (using her first pay cheque) to ensure her sister Maria also had the family name Scicolone.  So the first question regards her father.

What do you remember of your father when you were a child?“When you are five, six, seven, you follow what your mother tells you because you want to make peace. You want the normality, which we didn’t have. My father would always come to see me when my mother sent him a telegram saying, ‘Sophia’s very sick. Come.’ It didn’t matter why he came. What I always wanted, because all my friends had it, was a father. I wanted to be like them, to be normal. But this was not possible. So you see these things when you’re 13, 14, when you’re almost grown up. You see it for what it is.”

What attracted you to marry Carlo Ponti, a man 22 years older than you?“I felt at home with him. I was terribly young and he gave me confidence. He taught me many things. One day he bought me a suit and he said, ‘You should always wear suits because it suits you very well.’ But he was always saying stuff like that. I cut my hair to look like an actress who was very successful at the time, Lucia Bosè, and Carlo said, ‘You should always wear short hair.’

“Each time I did something that he liked he would always say, ‘You should always do that’ and yes, this gave me confidence. He was protective and he took my insecurities away, yes. He looked and sounded like he would take care of me, which no other man had done.”

And yet, in a way, you renounced your youth?“I have no regrets on how my life turned out. I have had bad moments, such as when I was trying to have children and I couldn’t — that was a big problem for me, really a tragedy — but I solved that problem. There are always moments that you don’t like, but you have to focus on the positive things instead of the negative. Otherwise, you go behind, not ahead.”

Don’t you regret being absent from the Oscar night when you won yourfirst and only Best Actress Academy Award, for your 1962 film La Ciociara?“I didn’t expect to be nominated, because generally (the Academy) didn’t nominate anything that wasn’t done in the English language. Reading the papers, I saw that people were saying, ‘Maybe Sophia Loren is going to win.’ I said, ‘Listen, if I don’t win, of course I’m going to be a little bit upset, but I’m happy to be among the five nominees. I thought, ‘If I win, I think I’m going to faint, and I think I better faint at home than on stage’ — so I didn’t go.”

Is it true you went to sleep before the Oscar was announced?“I really didn’t think I was going to win. I was in Italy at home. Of course, with the change of time in Italy and America, we made a mistake and at 6 a.m. said, ‘Well, the ceremony is over’ and went to bed. The next thing you know, Cary (Grant) is calling and saying, ‘Sophia — you won, you won!’ After I found out, I smoked a cigarette.”

There have been rumors about your closeness with Cary Grant. Now perhaps you can reveal what happened between the two of you.We first met in Spain on the set of the film “The Pride and the Passion”. Cary won me over with his good manners and zest for life. I was just 22 years old and often confused by a life that was going much too fast. He, at 52, had lived a lot and suffered a lot, too, although it appeared as though he had everything. I was very much involved with Carlo (Ponti), who had become my home and my family, even though he already had a family and it wasn’t clear when we’d be able to get married and live together in broad daylight. And Cary was married to Betsy Drake, his third wife, who came and went from the set, although their relationship had been faltering for a long time. Fortunately, we were staying in two different hotels, and this helped to at least keep some distance between us. He charmed me, but I always stayed one step back. I didn’t want to, and couldn’t, raise his hopes. I was afraid of having to give myself over completely to another culture, so different from my own. At the same time, it was hard to resist the magnetism of a man like Cary, who said he was willing to give up everything for me.

We remained friends long after the movie was finished. Cary showed me great joy when my sons, Carlo Jnr and Edoardo, were born. And I felt the same happiness for him, years later, at the birth of his daughter, Jennifer, whom he’d so longed for. And I was delighted when I met his splendid wife, Barbara, whom he loved to the very end. This is true friendship, being happy together in the fullness of life’s little and big miracles.

You spent your whole life with Carlo Ponti until his death at the age of 94 in 2007. Did you ever doubt he was the right man for you?“Never! When you get it, you hold on to it, because it doesn’t come again. In my life, family has always been very important. It gave me a structure, a positive foundation. Maybe because my mother never married my father, the dream of my life was to have a family. A family is forever. If your spouse goes away and dies, that foundation doesn’t change. It’s me and my children and grandchildren — yesterday, today, and tomorrow.”

And how would you describe yourself?“I am a nice friend in life — my friends appreciate my sincerity — and I like the Pope very much. Every Sunday, I look at him and I pray. I am very religious, and I don’t know if people think of me that way.”

Your favourite co-star?“Marcello Mastroianni and I had a wonderful time together. We worked together for at least 20 years, and we got to know each other very well. We were great friends. We had the same sense of humor; he was really the ideal partner for me. He was really a member of my family.”

How were you able to stay constantly in shape?“If you want to look good, you have to be a little careful in everything that you do. I like to walk outside in parks in the morning, and I’m careful about what I eat. You can’t have pasta every day thinking you’re going to stay beautiful.”

Regarding your sons, Carlo Junior and Edoardo. One is an orchestral conductor, the other a writer and director. They are both doing well in life.“They made me so happy with my life. And I have four grandchildren. Carlo’s son is very much like Carlo. And the girl is like his wife who is Swedish. They have blue eyes.”

Do you think that your eyes are your best feature?“No. No, I don’t. My character is my best feature.”