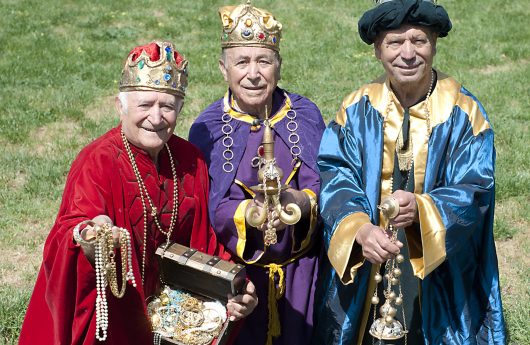 The man behind the spectacular Presepio Vivente

The “presepe” or “presepio” (also known as Christmas Crib or Nativity Scene) had been for a very long time the only Christmas adornment of the Italian families, a humble and genuine way, deeply-rooted in our culture, to celebrate Jesus’s birth before the advent of Santa Claus and the decorated trees.

Yes, modern society seems to be truly devoted to consumerism and even though nativity scenes fell in disuse for a while, they are back in vogue and even more, in a real-life version!

You would not expect such a thing to happen during the hot Australian Christmas, but here it is instead. The “Walk Through Bethlehem” is a unique event that has been running successfully for more than 10 years in Melbourne.

This living pageant is the result of a man’s dream, Virgilio Marcianò, “the man behind the scenes” as he likes to define himself; a bit funny considering that he is a profession- al conductor!

In addition, please, when you pronounce his surname, do not forget the accent on the final “o” as he likes to point out…

Native of Corigliano D’Otranto in the Apulia region, Mr Marcianò moved to Australia in his twenties.

“My first Australian Christmas was quite weird! The weather was hot; people were celebrating at the beach! There was something missing, all the traditions I grew up with like the simple act of putting on a presepio, give life and meaning to those little statues… I felt so sorrowful!”

In the ’70s, the only nativity scenes available in Melbourne were a couple of wooden statues standing motionless in front of a curious crowd of visitors at Myer (retail store).

“I wanted to create something beautiful that could please all the communities and involve them emotionally.”

“In 1978 I was the president of the Puglia Club where I set up my first presepio. Its immediate success pushed me to continue and do better.”

The following editions were held in Carlton and Parliament House, and in both cases, Virgilio had not enough time to build up the scenes and achieve the results of authenticity he was hoping. Until he found a perfect venue at the St. Peter’s Primary School in Epping (and a very special thanks goes to this school that makes the event possible!)

Every year more than 400 volunteers are involved in the preparation. Virgilio is the event co-ordinator but he is not alone: he can count on a huge team that includes electricians, carpenters, plumbers, tailors and cooks, to name a few, who set up the best scenery.

Nothing is left to chance for Virgilio who, with details, takes care of every aspect of the Christmas pageant: footlights and soundtrack, uniforms and clothes, Roman chariots and centurios. The sumptuous Erode court, ancient crafts faithfully reproduced like wool weavers, blacksmiths, wine makers and bakers, all at work together with the Three Kings and of course the stable with baby Jesus, St. Mary and Joseph and the inevitable ox and donkey.

About the animals: “I personally choose the best sheep, goats, horses and camels, to take part in the scenes… they all must be fit, no excuses, otherwise my presepio vivente would be a comedy and not a convincing representation!”

He even travelled to Bethlehem so that his presepio vivente would resemble reality. Virgilio has always been so meticulous in preparing the “Walk through Bethlehem” and this is a reason why pictures and videos are not allowed: “I don’t want anything to distract my actors during the representation. I want the best of it, dedication, authenticity and contemplation.”

As a result the “Walk Through Bethlem” gives you the illusion of a time travel back to King Erode period, over 2000 years ago, an evocative portrayal made even more magic by the symphonies of the Palestrina Choir scattered through hundreds of hidden speakers.

Since the early editions, an average of 60,000 visitors a year have been walking completely astonished through the old Bethlem.

Virgilio’s presepio vivente has, as we can imagine, a Catholic connotation, but even more, it has cultural and anthropological meaning. The participants, even if of different beliefs, feel part of a bigger community, a family where no barriers exist.

The Marcianò’s have been musicians for generations. Virgilio in particular inherited the passion for music directly from his beloved grandfather.

His childhood piano still lies at his birthplace and a special collection of accordions are hosted in his music shop in Northcote.